As expected, the trend defining rising support line from September kept USD/MYR afloat as it failed to fall under it. Since then, the Malaysian Ringgit lost ground to the US Dollar as it pushed above the September 2017 lows. But, multiple bearish signs point that the trend line from September might come under fire again and perhaps very soon.

On the USD/MYR daily chart, we have a Gravestone Doji at its most recent high which is also accompanied with negative RSI divergence. The former would require bearish confirmation via another close lower but that may be the case given the latter. RSI divergence indicates fading upside momentum which may precede a turn lower.

Should the dominant uptrend be overturned via a close under the rising line from September, near-term support would be eyed around 4.1475 next. Meanwhile a resumption of the uptrend may have the Malaysian Ringgit depreciating to October 2017 levels around 4.2425. 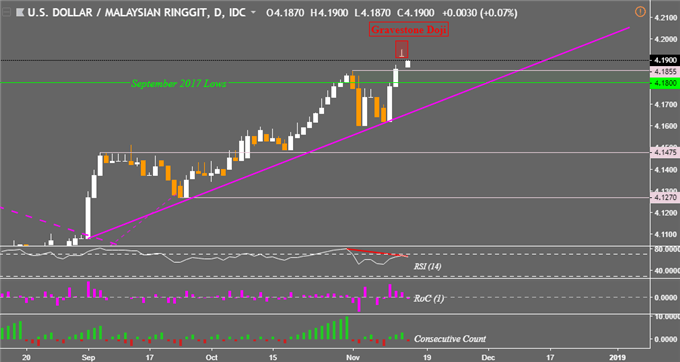 The Singapore Dollar remained confined in-between key support and resistance barriers as USD/SGD struggled to find a direction. A rising range of support from June is keeping the dominant uptrend intact. That is now combined with a horizontal range of support between 1.3718 and 1.3685.

Meanwhile near-term resistance appears to be the July 2017 highs around 1.38633. We do have negative RSI divergence here as well which may precede a decline. But those aforementioned support barriers need to be cleared before the dominant uptrend is overturned. 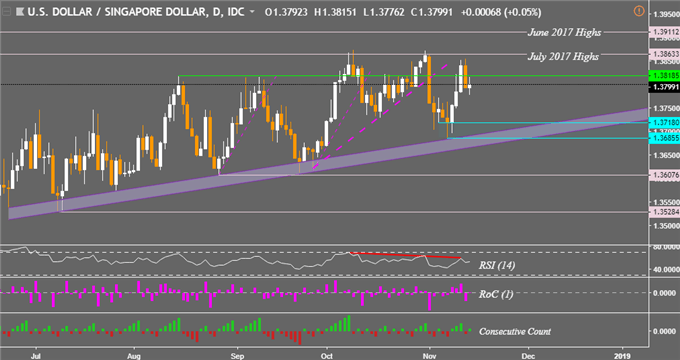 The Philippine Peso stalled appreciated against the US Dollar since we last took a look at USD/PHP a week ago. But, the new dominant downtrend still remains intact via the falling trend line from October. From here, immediate resistance is 53.24 which is the late August lows. A push above that exposes the descending line from October. Meanwhile near-term support is at 52.80 followed by 52.50 which is just under the November 8th low. 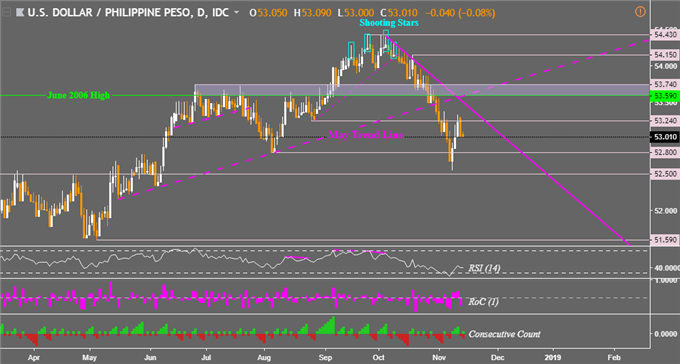 In USD/IDR’s decline from earlier this month, the rising trend line from January is still keeping the dominant uptrend intact. Until that trend line falls apart, the Indonesian Rupiah could struggle to make more meaningful progress against the US Dollar. Looking at the weekly USD/IDR chart below, near-term support is composed of the trend line as well as barriers at 14,646 and 14,555. Immediate resistance on the other hand is the September 2015 high at 14,784 followed by 14,930. 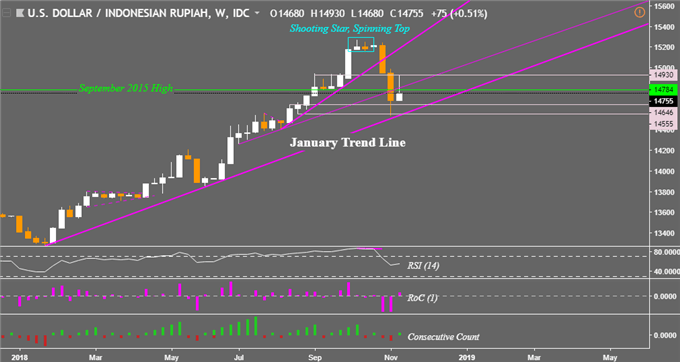