Last week we looked at why Bitcoin could decline another 85% from its then current levels. History is certainly on the side of this happening, but that could take awhile as bubbles don’t typically deflate to their end in one fell swoop, as we are seeing. With that said, though, Bitcoin is poised to begin the next big leg lower.

The increasingly quiet price action since June is drawing to an end, a sentiment my colleague Nick Cawley shares as well. The symmetrical triangle developing since then is very near the apex, and with today’s sudden wave of selling a break is likely to happen very soon. A drop below 5780 will have price outside of the triangle and below its base.

See how positioning changes in Bitcoin and other markets can help as a tool to determine price direction on the IG Client Sentiment page.

How bad could the next wave of selling get? The size of the triangle is about 2700 points, so as a rule of thumb price should move at least that far from the apex. That would put Bitcoin somewhere around 3400. And given the pent-up pressure since early summer it might not take more than a couple of months to do.

This means other cryptocurrencies might come about as close to zero as they can soon, with some actually going to zero. The end-game of the mania isn’t going to end well, just as the internet bust in 2000 led many to extinction. 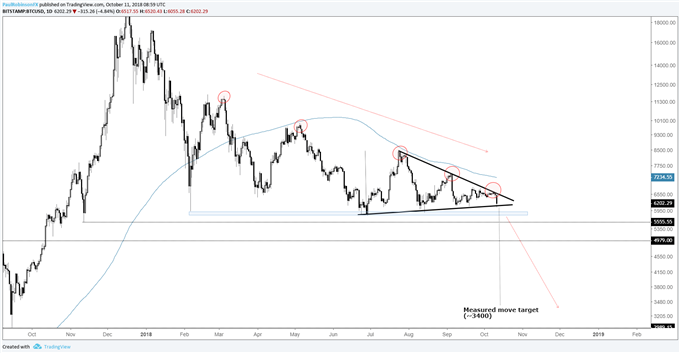