Last week, we noted a couple of reversal warning signs in USD/SGD prices which hinted that its next leg might have been lower. This was indeed the case, the Singapore Dollar appreciated against its US counterpart after a break under the near-term rising trend line from August. From here, the pair needs to descend through the 14.6% minor Fibonacci retracement at 1.36821 which would then expose the rising support line from June. Meanwhile, near-term resistance is 1.37451 which has also acted as support in the past. 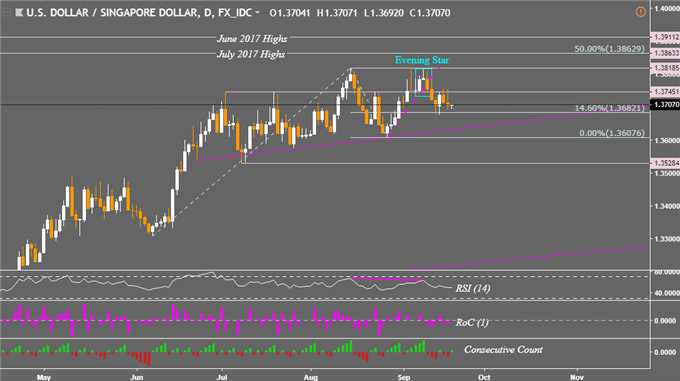 After the Singapore Dollar, the Philippine Peso could be next to witness gains against the US Dollar. This is because we have an evening star bearish reversal formation at the most recent peak in USD/PHP. In addition, negative RSI divergence warns upside momentum is ebbing. However, do note that the rising trend line from August still holds. A descent through it exposes horizontal support at 53.74. Meanwhile a resumption of the dominant uptrend has USD/PHP eying 54.49 next. 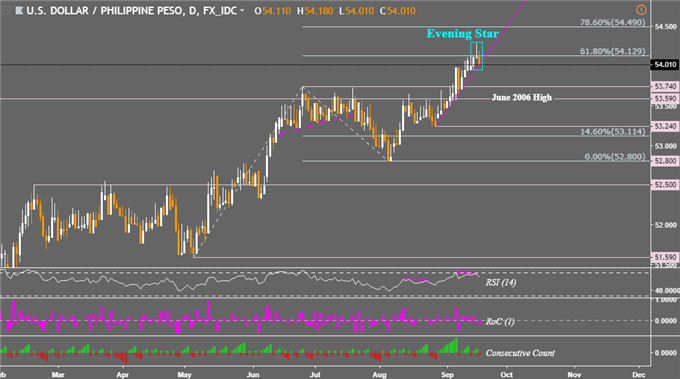 The Indonesian Rupiah remains in consolidation mode against the US Dollar. Prices are wedged in-between the September 2015 high at 14,784 and resistance at 14,930. The rising support line from August is still holding up but breathing room is running out. Thus it is likely that USD/IDR will see a breakout in the coming days which may determine where prices will go next. In that case, a turn lower exposes 14,646 while a push higher opens the door to testing 15,003. 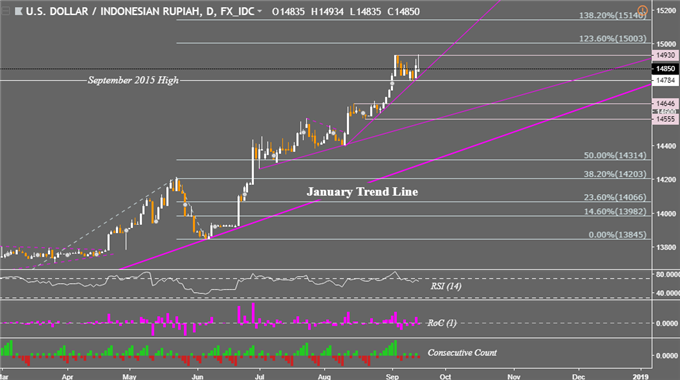 After 12 weeks of consecutive losses against the US Dollar, the Malaysian Ringgit ended its longest losing streak since September 2015. Albeit, gains were modest. For now, the rising trend line from April still supports USD/MYR’s dominant uptrend after the push above the descending November 2016 resistance line. A break under support, which is a combination of the immediate trend line and the 61.8% Fibonacci extension at 4.1293, exposes 4.1065. Meanwhile resistance may hold at 4.1617. 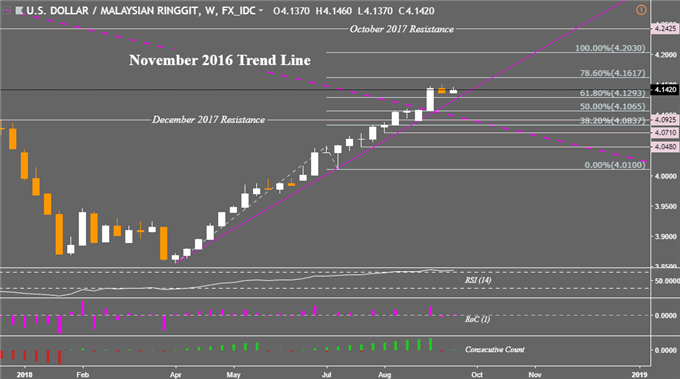