- A mid-week sell-off rattled the market but most tokens are positive on the week.

Bitcoin Holds on to Recent Gains

The largest crypto-token by market capitalization ($157 billion) is holding onto its recent gains despite Wednesday’s sell-off but is struggling to make further headway and a period of consolidation looks likely. Bitcoin is supported by the 200-day moving average, currently around $9,030 and the uptrend line from the February 6 low that kicks in around $8,900. A break and close below these levels could see further falls back down to around $7,300. On the upside the 61.8% retracement level at $9,397 has been broken twice and should not offer too much resistance and is followed by a gap created by the March 7 candle between $10,100 and $10,550. 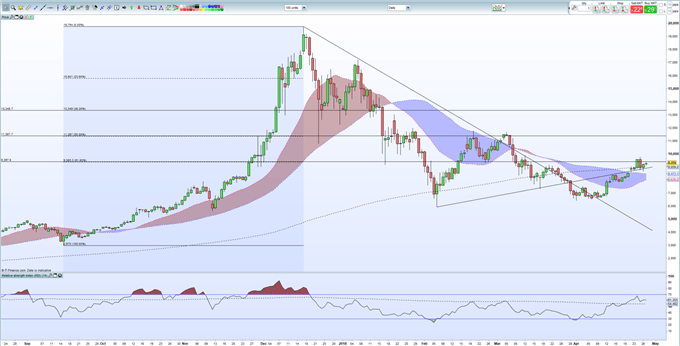 After outperforming the other crypto-market heavyweights over the last couple of weeks, XRP fell by 20% in 24-hours mid-week on fears that the token may come closely scrutiny over whether it could be classified as a security. Although fears were quickly quelled, the speed of the drop reminded traders of the overbought nature of XRP – see the IG Client Sentiment Indicator –and the lack of bids/liquidity when troubles hit. The chart shows XRP making higher lows over the past two days from the $0.75 swing low, boosting confidence but the potential 20-day and 50-day moving average crossover could stall any upside move. On the upside, resistance is seen at $0.96 ahead of $1.00 while support is pegged at $0.75 followed by $0.71 and $0.61. 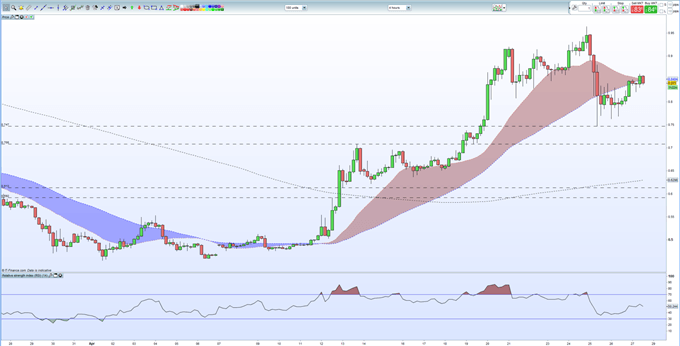 Ethereum is setting up a potentially bullish ‘Tea-Cup’ chart pattern that may suggest the market trading back up to the $1,000 level. The handle of the cup has been formed this week and resistance at $764 and $810 may be reached shortly. On the downside, 200-day moving average at $588 followed by two swing lows at $566 and $497. Ethereum was also mentioned by former CFTC regulator Gary Genser when he discussed the possibility of Ripple being classified as a security. Web-based wallet provider MyEtherWallet was in the news this week after it was hit with a DNS spoofing attack this week which contributed to the mid-week fall. 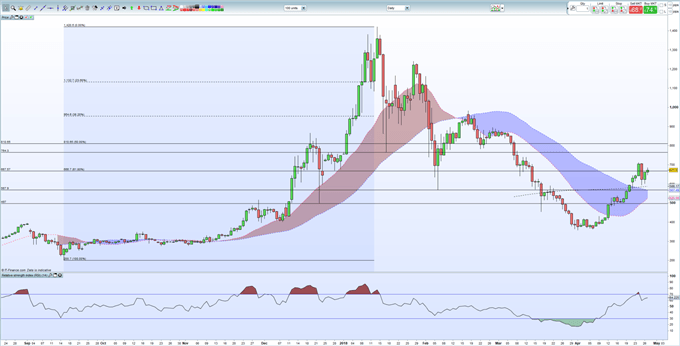 Another token with the potential to rally past this week’s high and back towards levels last seen one month ago. Currently trading around $150, the upside targets include $166 followed by $175 before $200 comes into the equation. However before LTC pushes for new highs, the uptrend on the four hour chart needs to fully re-established otherwise a pull-back to $137 may occur. 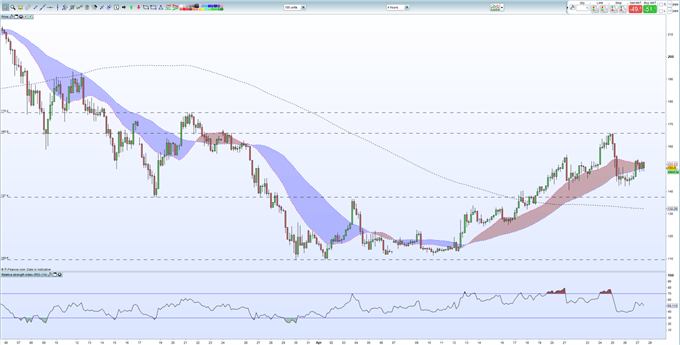 If you are interested in trading Bitcoin, Ripple, Ether or Litecoin check out our Introduction to Bitcoin Trading Guide.