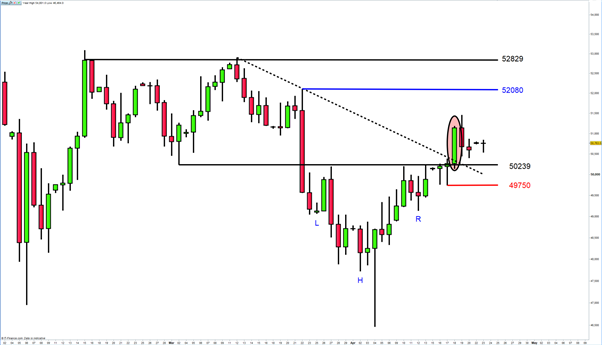 What we had speculated to be a bearish flag formation (below) was not to be. The downside breakout did not occur, and the index has instead produced a sharp close (circled black) above the 50239 level as well as above the downward trend line.

We now consider the price activity below the 50239 level to be an inverse head and shoulders formation (labelled L, H & R), confirmed by the strong upside break (circled black). These patterns are considered reversals of trends and in the current scenario is seen as bullish for the index price.

Traders of these patterns might consider long entries from current levels or into a pullback towards 50239. 52080 becomes the initial target favoured, while a close below 49750 could be used as the failure level for the trade. 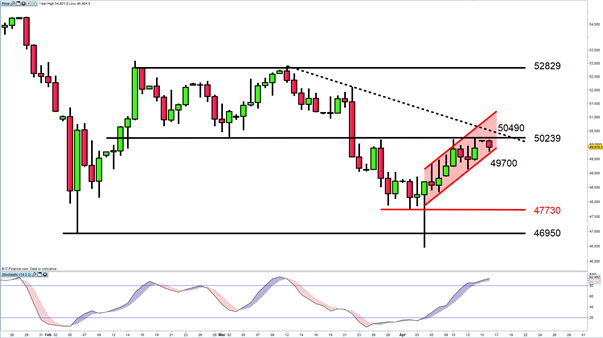 The contrarian trade suggestion, although not our preferred scenario, was the correct trade from the previous note (below). The index has continued to rebound and found resistance by the 50239 level, which was also the upside target for the rebound. The red channel highlights the move up which could be setting up as a bear flag formation. Despite the rebound we still consider the trend bias for the index to be down. The move higher has also moved the index back into overbought territory.

For a short entry confirmation signal, we are looking for a break below the lower support of channel (currently 49700). A close below this level, considers 47730 as the next support target. In this scenario a close above the 50490 might be considered the failure level for the trade (should it confirm).