Build confidence in your own AUD/JPY and NZD/JPY strateg ies with the help of our free guide!

Sentiment has lately been a major driver in the markets. Last week, it began with trade war fears calming as US officials stressed that they have no intentions to begin any. The very next day, there was a reversal in mood as the Trump administration considered cracking down on Chinese investments in technologies.

With the potential for more sudden trade developments that may impact sentiment, this is a good time to take a look at two currency pairs that could be vulnerable to sudden price swings. They are AUD/JPY and NZD/JPY.

This is because on one end, you have the anti-risk Japanese Yen which benefits from declines in mood. On the other side, both the Australian and New Zealand Dollars typically suffer when traders focus on preserving profits when things turn for the worse.

On a daily chart, AUD/JPY has been in a downtrend since late January. On its way lower, the pair managed to push below a descending support line from July 2017. Since then, this slope has acted as resistance and there is a chance it may do so again. Positive RSI divergence has emerged, hinting that momentum to the downside is ebbing. 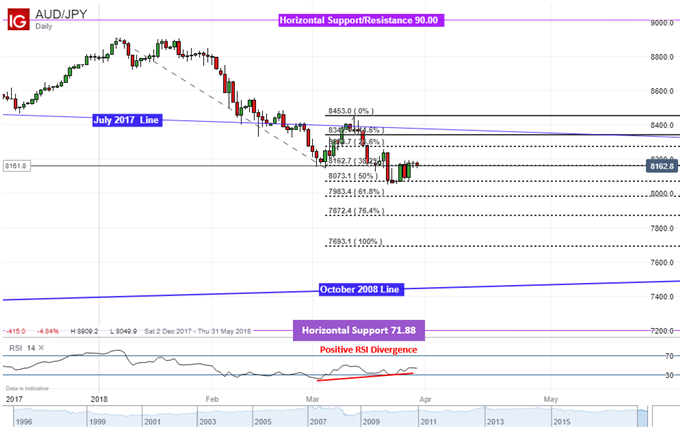 On a weekly chart, you will find a couple of long-term targets. As a potential area of support, there is a long-term trend line that dates back to October 2008 that may catch AUD/JPY. If it doesn’t, there seems to be a persistent horizontal support level around 71.88. Conversely, if the pair does turn higher, the 90.00 figure has in the past acted as both support and resistance and may do so again. 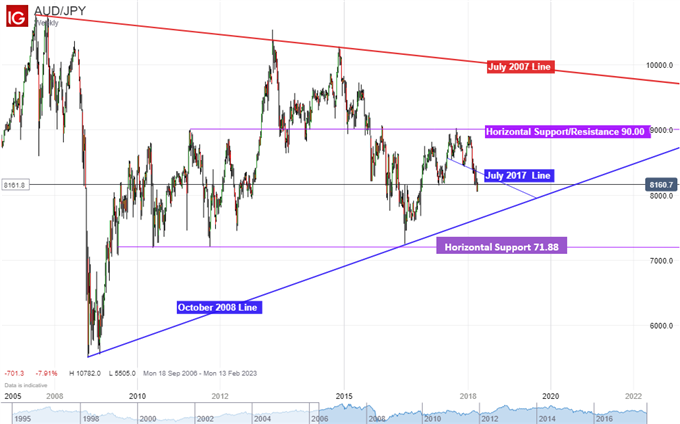 On a daily chart, NZD/JPY has put in a similar performance since the beginning of this year when comparing it to AUD/JPY. In fact, positive RSI divergence is also present here. With that in mind, if NZD/JPY reverses and keeps climbing, near-term resistance is the 23.6% Fibonacci extension at 77.29. A push above that exposes the descending line from late January.

If prices keep falling, the pair will have to break through the 38.2% level at 76.47. A push below that exposes the 50% midpoint at 76.80. This area is interesting because since November 2016, between 77.70 and 77.90, NZD/JPY has struggled to push below this range and it appears to be meeting the same fate once again. 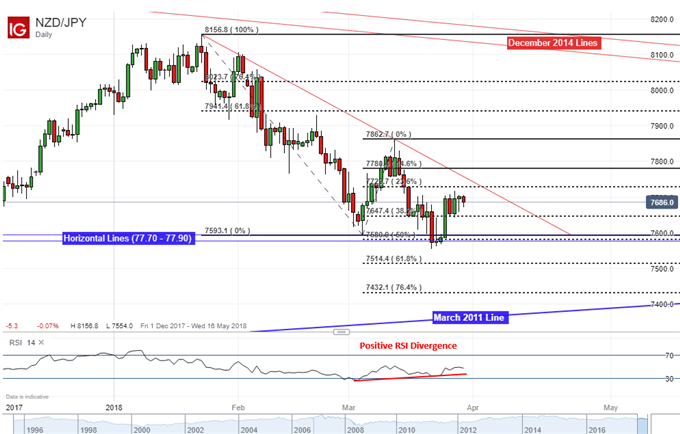 In fact, if you look at a weekly chart, a bullish engulfing candlestick pattern has formed. While this hints that a turn higher may be coming, we will have to await confirmation. If we don’t get it and the pair keeps falling instead, NZD/JPY will eventually face the long-term March 2011 rising trend line. 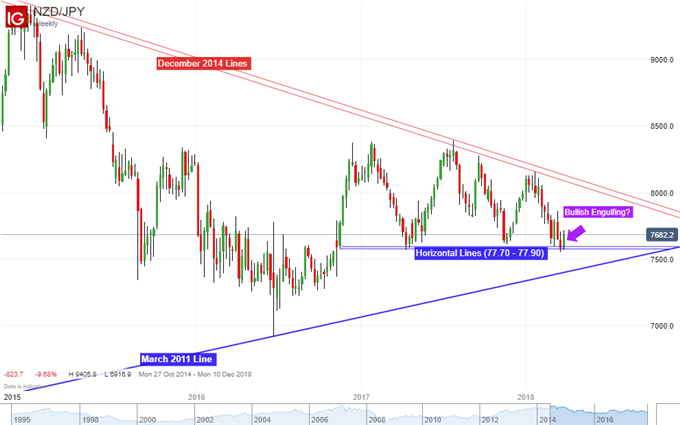