Back on March 18 cryptocurrencies put in key-reversal bars which had the sector poised for further gains, but momentum quickly stalled just a day or two later. Last week, we looked at Ethereum, Ripple, and Litecoin charts and made note that the renewed selling may be underway. With the aforementioned trio at or knocking on the door of the lows from 3/18, the group looks headed for a continuation of the multi-week downtrend within the context of a broader speculative unwind.

Ethereum on the verge of a lower-low, 400 target nearing

Early this morning, Ethereum (ETH/USD) slightly undercut the March 18 low but has recovered slightly since. A close below the spike-day low will quickly have the targeted 400-area quickly in sight. This will complete a round-turn of the rally from the wedge formed during the second half of last year, but will only be modestly beneath the lowest trough of the topping formation discussed last month.

The ‘three peaks’ top points to even lower prices, but ETH/USD may find decent support at the apex of the wedge and enough sponsorship to put in another trade-able low. But at this time, all bounces continue to be viewed as selling opportunities. Traders who chase rallies are likely to find themselves disappointed as the mania continues to move in reverse. 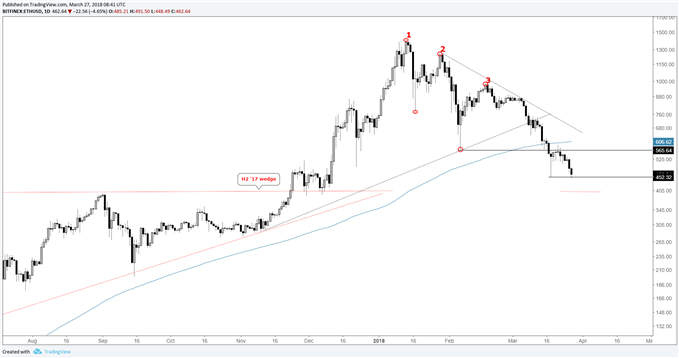 Ripple breakdown will have 40 cents in sights

Ripple (XRP/USD) is closing in on carving out a lower-low below 5375, which if broken will have the 2017 high just a shade under 40 cents in focus. The name of the game is the same here, rallies are viewed as better selling than buying opportunities. Also, like Ethereum, a full reversal of the rally from the H2 ’17 wedge is expected at some point. For XRP/USD, it still needs to trade down to 25 cents to complete the roundturn, an event which is likely to take awhile longer than it will for ETH/USD to trade to its similar target. 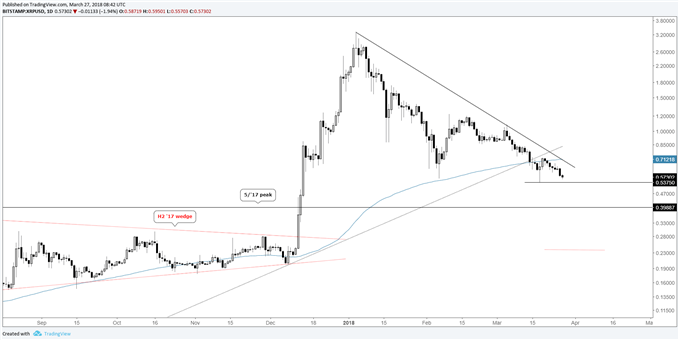 Litecoin (LTC/USD) is trading beneath the trend-line rising up from September, and very near clearing below the March 18 low at 137 and the 200-day moving average. Looking to the left on the chart, a breakdown will open up a path to the February 2 low around the 102-mark. Traders can use the downward channel off the Feb high as guidance; stay below the upper-parallel and a bearish bias will remain intact. 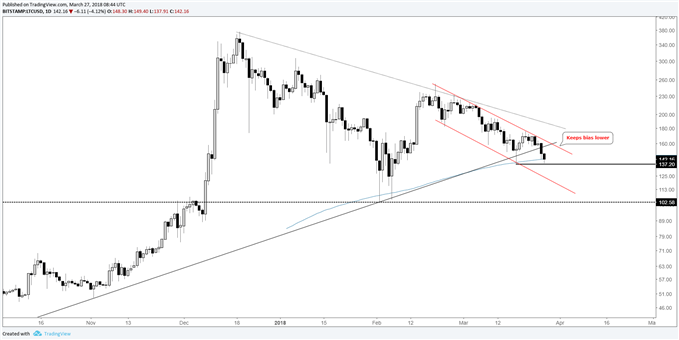