Last week, several cryptocurrency charts began to show signs of a resurgence in selling on the way, with Ethereum (ETH/USD) and Ripple (XRP/USD) both having broken meaningful support levels. We’ve seen a turnaround the past few sessions which looks to be pushing the two up to a retest of broken support. How they react on a retest (should they trade higher) will be important for the near-term trading outlook.

Ethereum broke an eyed zone of support last week in convincing fashion, along with the trend-line from November. Friday’s turnaround, though, has old support turned resistance standing in the way, along with a pair of trend-lines running lower off peaks set in January and February.

If ETH/USD is to break the bearish sequence from last month and try and put to rest the topping pattern starting back a couple of months ago, the first step will be to recapture the cluster of resistance just ahead. If it can, then further upside could unfold.

However, if indeed we’ve seen a macro-top in the cryptocurrency (and the sector in general), then a turn lower may soon put sellers back in control. In the near-term, how the next few days play out could be important for determining a trading bias with conviction.

For an in-depth take on the direction blockchain trading and ICOs are heading, join my colleague, Nick Cawley, tomorrow for a live discussion with Ethereum's former CCO, Stephan Tual at 2 pm London time. 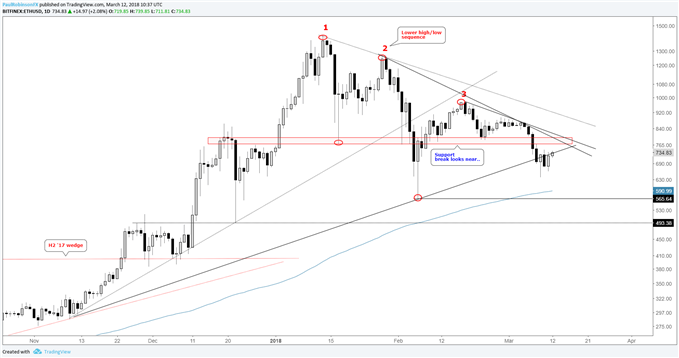 Ripple (XRP/USD), like Ethereum, also broke significant support last week. The 85/87-cent zone has been in play since it first became resistance back in December. The break and generally weak trend have the cryptocurrency’s path of least resistance still pointed lower.

It will need to recover back above the 85/87-cent zone and the trend-line off the record high if it is to gain traction to the top-side towards 1.08 and higher. Looking lower, the January 2017 trend-line first clocks in as support, with the 200-day MA currently in confluence. Below there, the Feb spike-low at 56-cents comes into focus. 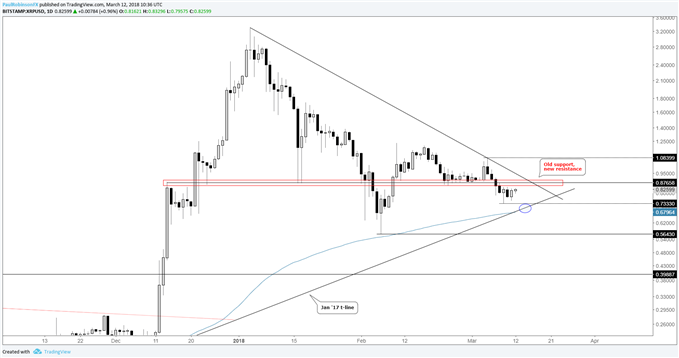