In recent sessions, we've seen the cryptocurrency space try to stabilize around key levels. The price of Ripple is currently sitting in an area that has been in play as both support and resistance since mid-December, and while support is to be respected until broken the tepid bounce so far points to increased risk of it breaking. Ethereum price has a level of support it is trying to rise from as well, which if broken will further along the topping pattern we discussed last week.

Support in Ripple not providing much lift, at risk of breaking

The 85/87-cent vicinity in Ripple has been a key inflection point since the first time it turned down from this area back in the middle of December. Since then, it has been support on a few occasions, but in recent days it hasn’t sparked much buying interest.

Support is support until it’s not, but if the past few days limited bullish reaction is any indication, then we may soon see a breakdown. Short-term traders looking to sell XRP/USD will be best served waiting for a confirmed break, while those holding longs can use support as a reference point for placing stops.

Looking lower, support comes in at the 200-day MA around 63-cents, which is also near the January 2017 trend-line and not far above the Feb low. The relatively close proximity of the three varying types of support make the ~63/56-cent area an important one.

Should support continue to hold and buyers show up, a push above 1.20 would be an important event given it will be a higher high following a higher low relative to the monthly low.

Looking to learn more about cryptocurrencies? Check out this guide, Introduction to Bitcoin Trading 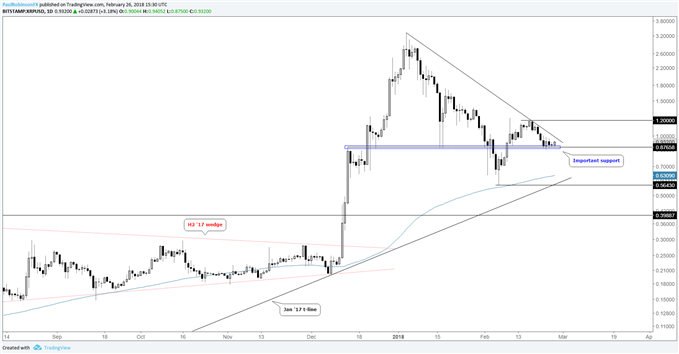 Ethereum is showing more life off support than Ripple, but the possibility of a broader topping pattern for the cryptocurrency could soon overshadow any further upside we see from here. There is minor trend-line resistance in the vicinity, which may put a lid on the current bounce. If it doesn’t, though, we’ll be looking towards resistance around 980 and the trend-line off the record high as near-term bullish objectives.

Support in the vicinity of 800/770 dating back to December, if broken, is seen as furthering along the sequence of lower-highs, lower-lows since the peak created last month. A clean break through support could quickly bring the November trend-line into play, followed by the monthly low at 565 and 200-day running in that same area. 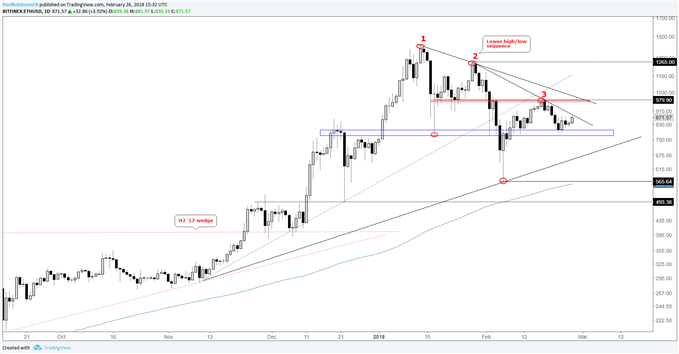