Bitcoin near the apex of a triangle, sitting on big support

On Friday, the cryptocurrency market was sent lower by exchange-related news in Japan, but managed to rebound. The drop and rebound helped further along the development of a symmetrical triangle in Bitcoin (BTC/USD). The coiling price action is indicative of a potentially explosive move on the horizon.

Triangles can break in either direction, which is why it is important to wait for the break, rather try and predict it, before becoming aggressively positioned. The development of the formation arrives at an interesting juncture. The trend-line from July has been broken on several occasions on an intra-day basis since the sharp reversal on Jan 17, but each time Bitcoin managed to close the day at or back above.

Should we see a downside break unfold, it would not only constitute a breach of an important trend-line, but also occur in the direction of the trend off the December high, which could get Bitcoin really rolling downhill.

As we noted earlier in the week, a change in character could be underway in the cryptocurrency market, where dips aren’t bought as they once were. A downward break would confirm the notion that we are seeing an important shift in market psychology, and that the ‘animal spirits’ have been tamed.

On an aggressive break, the 9222 level will become very important. A break below the spike-day low could see selling accelerate down to 7888 as the next price level and the 200-day at 7524 (which hasn’t been touched since August 2016). The first significant swing-low doesn’t arrive until all the way down to 5555. It may take some time to get to that point, but if the bubble has burst, it’s well within possibility it goes there at some point this year.

On a top-side breakout, Bitcoin will quickly find resistance from around 12500 up to 13000. Beyond there it would have room to run towards the trend-line off the record high, currently in the neighborhood of 14600.

The thinking on this end, is that the breakout will be in line with the trend off the December high, but, again, the key to these patterns is waiting for a confirmed break before running decisively with a direction.

Check out what retail traders are doing in Bitcoin on the IG Client Sentiment page. 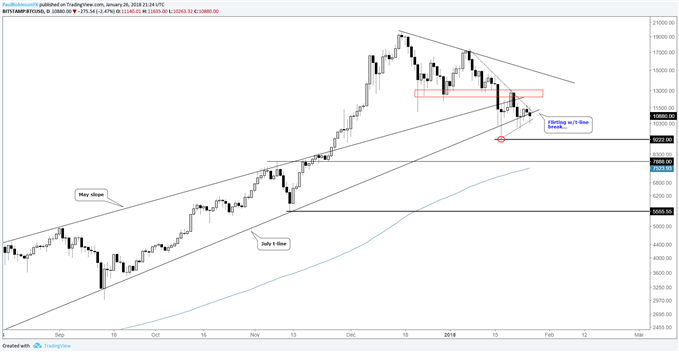 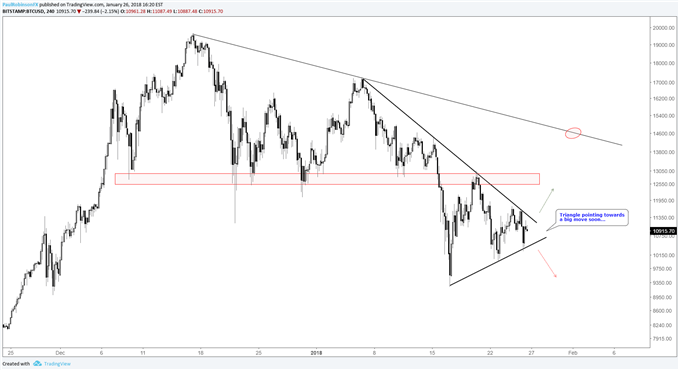 Ethereum also nearing the apex of a triangle

Ethereum (ETH/USD) is the other crypto with a clear pattern near a make-or-break point. Ethereum has held up better than Bitcoin so far, and isn’t sitting on nearly as important of support. But, nevertheless, a breakout is likely to lead to an explosive move.

A breakdown will bring the December trend-line into focus, and should that break the earlier-month spike low at 770 is up next. Get beneath there and things get interesting, as there isn’t any truly meaningful support until 493, then the 200-day at 449 and rising.

A top-side breakout will bring 1160 into play, and beyond there a run back to the high at 1424 becomes possible. Either way, a big move looks likely to be nearing. 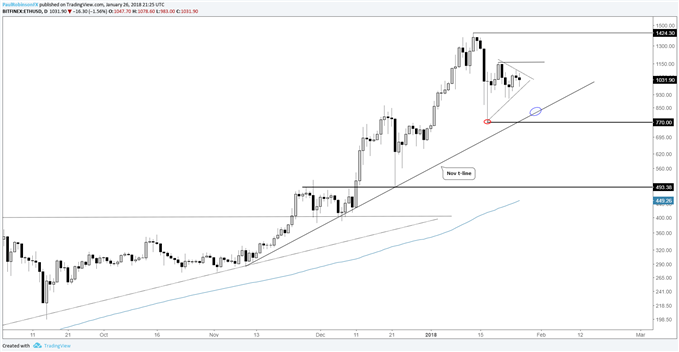 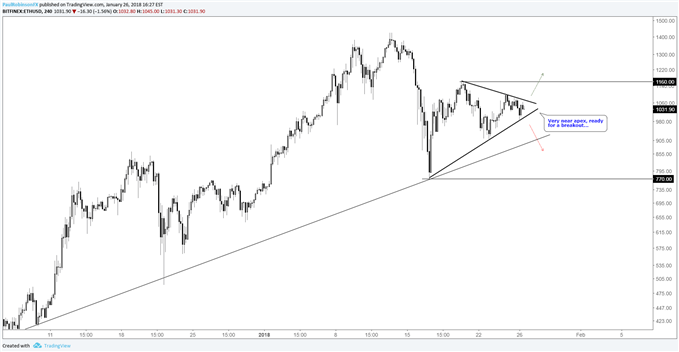