Whether you’re a new or experienced cryptocurrency trader, we have several resources to help you; Introduction to bitcoin trading guide, indicator for tracking trader sentiment, archived articles, and a weekly webinar discussing the latest developments.

Today, Bitcoin, along with other cryptocurrencies, is declining on overnight news that various South Korean exchanges were raided by tax officials and police. The drop in Bitcoin is taking it closer to the significant support zone in the vicinity of 11750/160 we’ve been discussing in recent days.

The most important aspect of noted support, is the slope rising up from May. It is viewed as a line-in-the-sand before a much larger decline could unfold. One possible scenario could play out in the weeks ahead is a wedge, either symmetrical or descending. More time will be needed to see it come to fruition, but certainly a scenario which would could hold significant value.

Price coiling up after the large run-up would likely lead to another explosion in volatility at some point. For now, though, it’s just a scenario – the bigger interest at the moment lies in whether Bitcoin can find buyers at or before the aforementioned support zone. 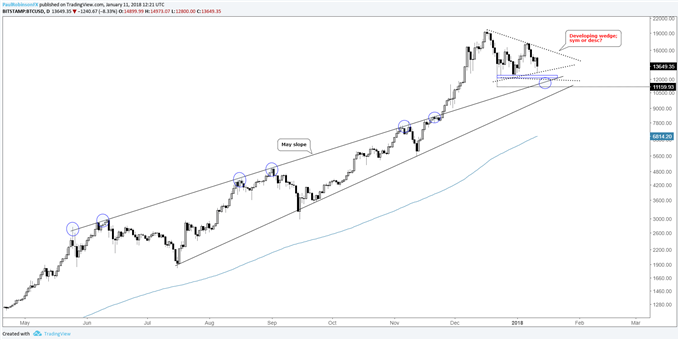 What is the top mistake traders make? – Find out in our Traits of a Successful Trader guide.

Litecoin as of late is carving out a similar price sequence at Bitcoin, with the possibility of a wedge developing on the horizon. Big support clocks in at last month’s low around the 200-mark. If it is met and a bounce develops, a descending wedge will become a possibility. If buyers show up before, then a symmetrical triangle could form. In any event, it’s only a scenario at the moment. 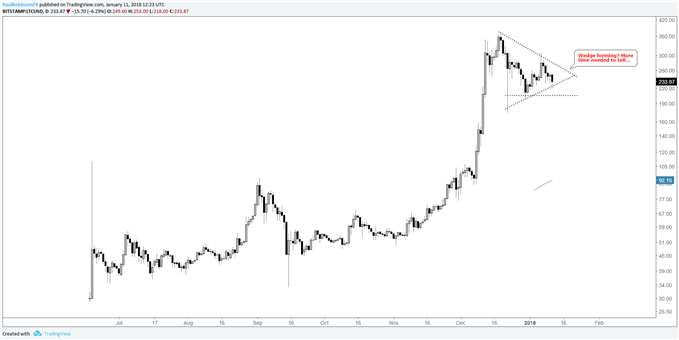 Ethereum is starting to pull off the top-side slope we penciled in yesterday as resistance and with a bit more selling it will soon meet the trend-line extending higher off the 12/22 spike-day low. This will be the first spot to watch for a bullish response by the market, but if it fails the next level of notable support won’t arrive until last month’s high at 863. 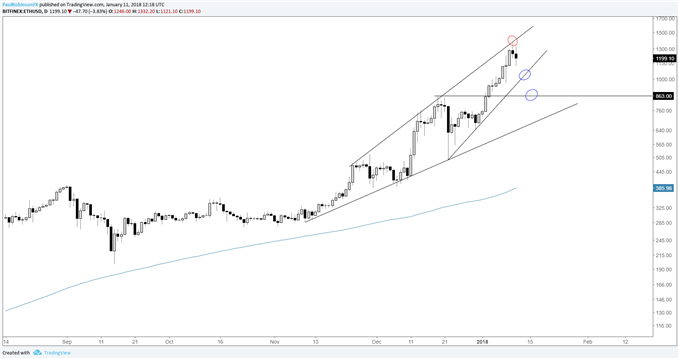