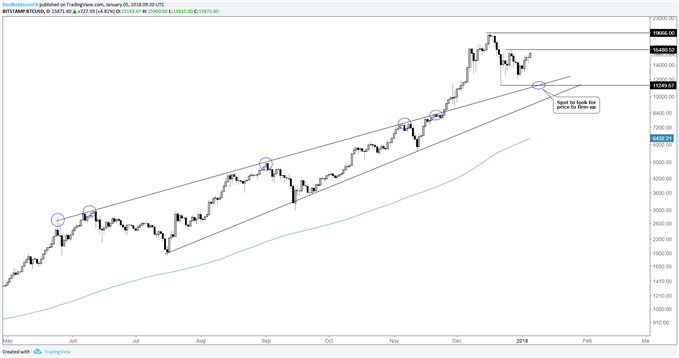 New to Cryptocurrencies? Check out this introductory guide.

Bitcoin appears to be basing, but if it declines a big spot lies below

Bitcoin has been taking a breather the past three weeks as other cryptocurrencies have seen strong interest. A rotation in flows. Overall, Bitcoin looks to be digesting gains and building a base. At the moment, there is a slightly negative tone to the chart off the December high, with the possibility of another lower-high forming right around current levels below the 12/27 swing-high. Should we see a lower-high develop into further weakness there is significant support down around 11250, where a slope lies from May with multiple inflection points. It’s a good distance from here and well off the nearly 20k-mark seen last month. But a decline of 30-50%, as we’ve seen, is a fairly normal occurrence for these volatile markets. If a decline doesn’t materialize, a break above 16480 could set into motion a rally to new highs.

See how retail traders are positioned in Bitcoin and what it might mean – IG Client Sentiment page.

Ethereum in less than two weeks has gone from the 600s to over 1000, putting it on the extended side right now. A pullback would do it some good if it is to continue its trek higher. There is confluence of support between the old high and a trend-line in the vicinity of 863. Perhaps we’ll see some profit-taking in ETH/USD, while buyers step into BTC/USD. 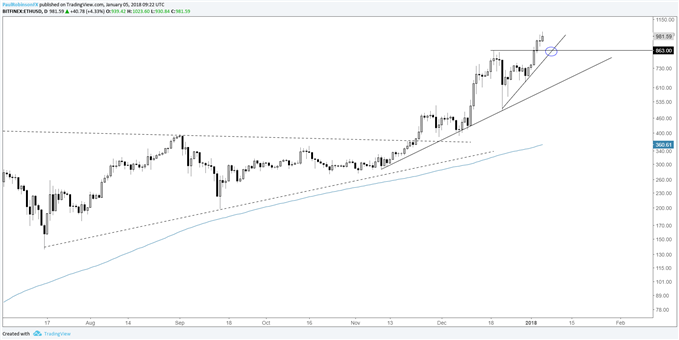 Ripple’s vertical rise in need of a correction

Ripple is extremely extended at the moment, given the run from $0.20 to over $3.00 in the past month. It has become a major player almost overnight, but its currently extended state suggests risk of a sharp reversal is growing with each tick higher. This is one we’d choose to stand aside on in favor of basing price action before seeing it perhaps make yet another move to the top-side. 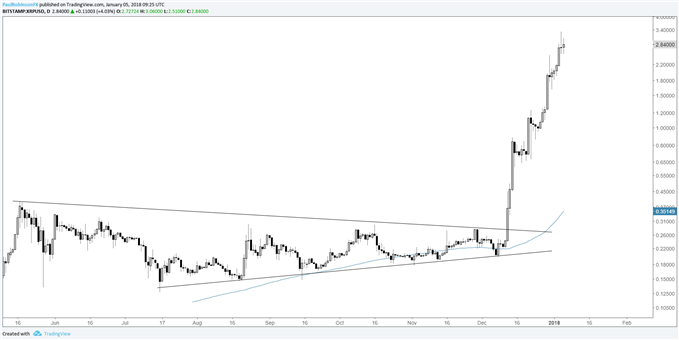