-EUR/AUD approaches the middle of an Elliott Wave Triangle

While assessing the longer-term prospects for EUR/AUD, the pattern appears to be a bullish zigzag that is incomplete to the upside. The reversal point of December 1 pivot comes at an interesting external Fibonacci level. The pivot near the 1.618 extension is quite large and hints that wave could be the (b) wave of a triangle pattern. It is a little early to identify it with certainty, but the pattern is following the guidelines of a running triangle within the early stages.

If this triangle pattern holds, then look for wave (c) of the triangle to move down towards 1.48 while holding above 1.4418. At that point, we would anticipate a wave (d) rally back towards 1.54 while holding below 1.5771. 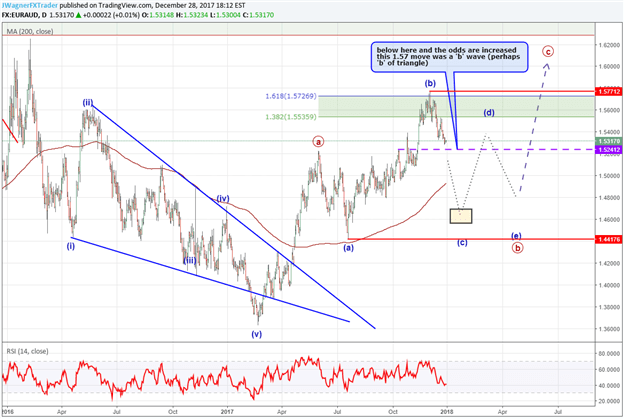 The recent rise of the Australian Dollar has pushed the GBP/AUD aggressively lower. On December 8, GBP/AUD reversed from price channel resistance and has closed down 12 of the past 14 trading days since then. Relative Strength divergence appeared at the highs indicating a weak market. The blue price channel below is formed by a complex w-x-y correction higher. Therefore, it hints at an eventual retest of the channel lows near 1.65. 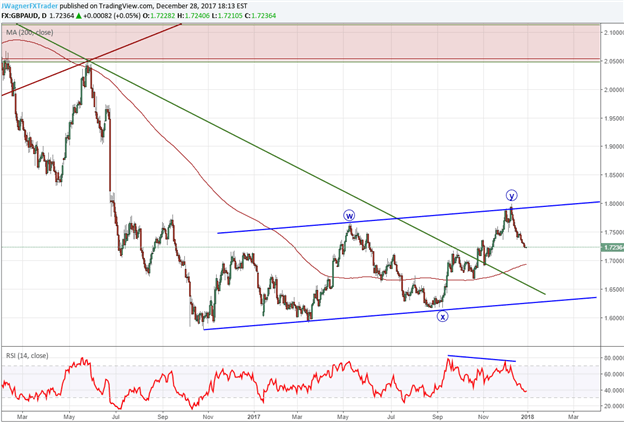 AUD/JPY used to be the poster child of risk on versus risk off. Since the world began its indulgence on quantitative easing, AUD/JPY has hammered through a large triangle pattern. We are far enough along in this bearish triangle to warrant placing it on the radar to revisit later on in 2018.

Once this ‘E’ leg of the triangle exhausts (likely near 96-100), be on alert for a large correction beginning.

Do you struggle with your trading? This could be why. 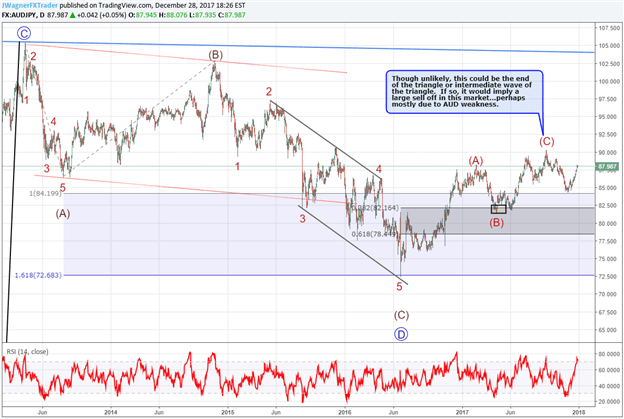