GBP/USD Volatility Expectations Rising, On the Brink of a Range-break

What drivers are expected to move markets through the end of the year? Check out the DailyFX Forecasts.

In the table below, we’ve listed implied volatility (IV) levels for major USD-pairs looking out over the next one-week and one-month periods. Also noted are the differentials between the two, which can help shape expectations and/or identify currency pairs where the options market may be under or over-pricing potential price movement in the short-term. Also outlined, are derived one-week range-low/high prices from the current spot price within one-standard deviation. (Theoretically, there is a 68% probability that price will remain within the lower and upper-bounds.)

Since bottoming on October 6, GBP/USD has gone into a range with a small handful of powerful days, but nothing which led to follow-through. During this period one-week and one-month implied volatility declined to 6.32% and 6.72%, respectively. Since last week it has been on the rise, with current levels of 8.75% (1-wk) and 7.99% (1-mo). Not only have expectations for price movement in cable risen strongly in recent sessions, it also tops the board of major USD-pairs.

The projected one-week one-standard deviation range is 12916-13232. Let’s take a look at how these levels align with the current technical landscape. First off, the range is running on borrowed time, which means a break is likely coming soon. With cable not finding much lift around a pair of trend-lines (March-current, lower parallel – April-current) and the October low it is becoming increasingly likely the break will come to the downside. Should we see a sell-off commence it would also be in-line with the trend off the 9/20 spike-day high which came at a confluence of the gap following ‘Brexit’ and a trend-line running down from July 2014 over the ‘Brexit’ day high.

The projected one-week low is 12916, which isn’t far from the 200-day MA currently at 12872. But the next level of price support doesn’t arrive until under 12800. With that in mind, a breakdown may lead to price expansion and even higher levels of implied volatility. On the top-side, coupling trend direction prior to the multi-week range with overhead levels and the trend-line off the September high, it looks less likely we will see a strong move higher in cable.

For details on potentially market-moving events, check out the economic calendar.

Looking for real-time analysis and/or educational webinars? Check out the DailyFX Webinar Calendar. 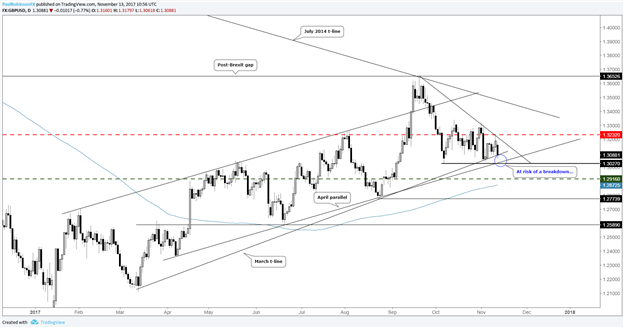