Looking for a longer-term view on GBPUSD? Check out our Q3 Forecast.

In the following table, we’ve noted implied volatilities for major USD-pairs for one-day and one-week time-frames. Through implied volatility, we’ve calculated the projected range-low/high prices from the current spot price within one-standard deviation for specified periods. (Statistically speaking, 68% of the time price should remain within the lower and upper-bounds.)

Cable surged on Friday to close at its best levels since September and also carved out a higher-high from the swing-high on the last day of trade in June. This exposes further upside to come in the weeks ahead as long as it can maintain above either the recent break levels (currently testing after yesterday’s miss on inflation data), or the trend-line rising up from last month’s low. The projected one-week high within one-standard deviation clocks in at 13163 and doesn’t align with any visible price resistance. If GBPUSD is to continue on higher this projected range-high may easily be exceeded, suggesting one-week implied volatility is underpriced at 7.05%.

As already stated, support above 13000 is undergoing a thorough test and is the first area we look for cable to hold in an attempt to shake off yesterday’s weak data. There has been a weak dollar theme in place for some time now and that may be enough to help keep sterling boosted against the buck (there are two sides to the coin as we discussed in this morning’s webinar).

In the event support close at hand doesn’t hold the next area of support is the trend-line extending higher from the June low, which arrives above the projected one-week low of 12909. Even though sustained trade back below the breakout level isn’t the most desirable outcome, as long as price can carve out a higher-low (an event which may take shape on the June trend-line) then cable remains constructive.

Giving trend and support the benefit of the doubt, risk is skewed towards seeing the top-side projected range-high broken versus trading below the one-week low threshold. An additional factor which is supportive for GBPUSD to sustain a bid is the fact retail traders are currently holding a larger short position than long by a ratio of 1.32:1, which is considered a contrarian indication edging in favor of higher prices. For more on how to utilize sentiment, see our section on IG Client Sentiment. 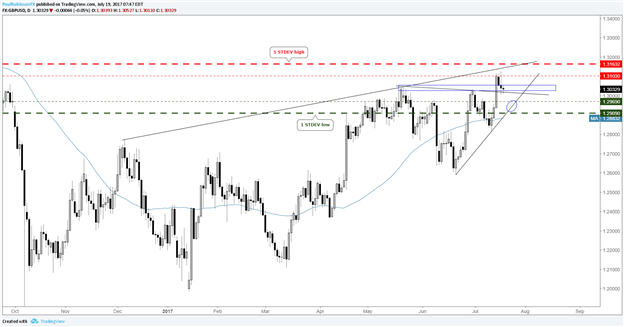