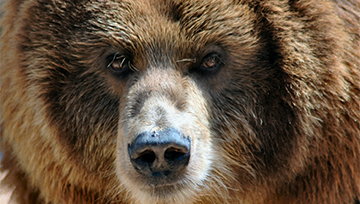 Major global equity indices continue to trade at or near fresh record peaks, and yet our IG Client Sentiment Index shows the majority of retail speculators continue selling into recent rallies. We have used this as clear contrarian signal that equity markets may continue onto further records. The critical question moving forward is nonetheless clear—does current sentiment warn of extremes and imminent reversal?

The short answer is straightforward: probably.

Our data shows a massive 83% of traders with open positions in the US 500 remain short, while positions on the Dow Jones-tracking ‘Wall Street’ contract stand at 85% short and FTSE 100 at a near-record 90% short.

We often see such heavily one-sided positions at major price and sentiment extremes, and the fact that traders short massively outnumber those long warns that we are at such an extreme. 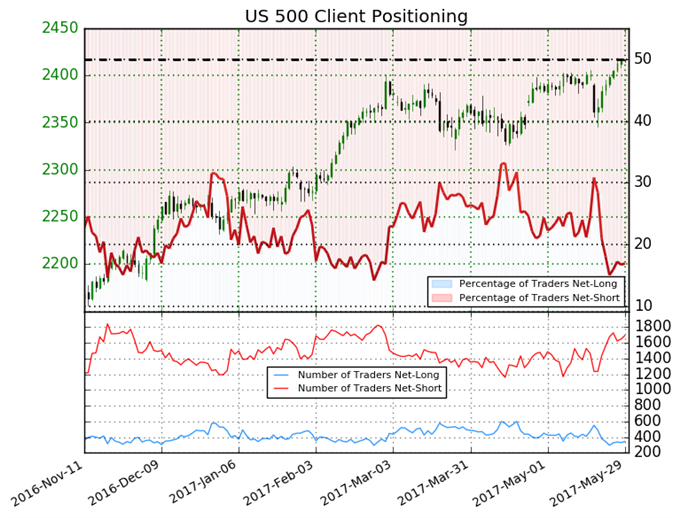 Why and how do we use IG Client Sentiment in trading? See our guide and real-time data.

The major caveat is nonetheless simple: price and sentiment extremes are, by definition, only clear in hindsight. If we look at past incidences of such one-sided positioning it seems clear they precede key turning points: the S&P 500 and Dow Jones reversed lower through early March when sentiment hit over 80% short (below 20% long). Of course sentiment remained at least 80% short for over a month as both indices continued onto fresh record highs.

It remains impossible to identify the true sentiment extreme, and caution is advised against joining ‘the crowd’ as they sell into equity market gains. 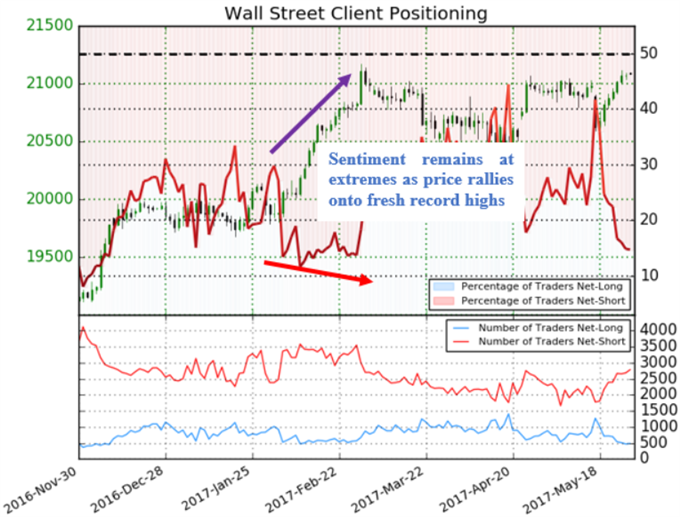 Why and how do we use IG Client Sentiment in trading? See our guide and real-time data.

Sentiment can remain heavily short for extended periods of time, and until we see material signs of turnaround we will remain cautious in trading for an S&P 500 pullback. This remains true for the Dow Jones Industrial Average and FTSE 100 as well. And indeed our technical forecasts for these major markets warn to expect market indecision.