Want access to all of our second quarter forecasts? Get them here ! 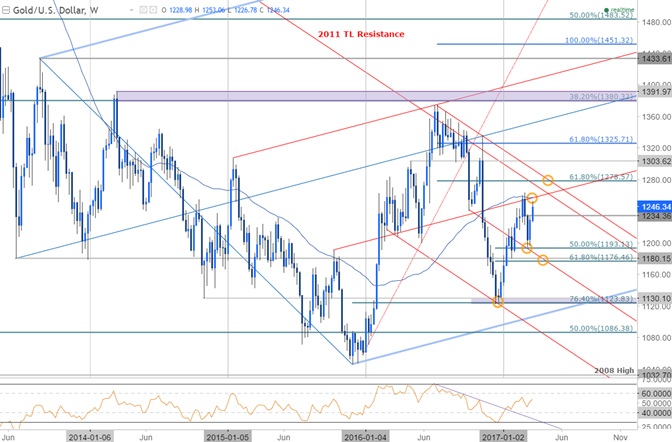 Last quarter we highlighted that gold prices had approached a“critical support confluence in late-December at 1220/30- a level defined by the 161.8% extension of the decline off the yearly highs, the 76.4% retracement of the advance off the 2015 low, the 2014 low and the lower parallel of the embedded descending parallel formation. Note that the lower-median-line parallel extending off the 2015 low comes in just below and the immediate downside bias is at risk into this key region.” That, in fact, turned out to be THE low in gold with prices ripping higher into the start of the year.

The precious metal up nearly 11% off the lows and more than 8.25% quarter-to-date, marking the largest quarterly advance since 1Q of last year (+16%). Note that 2016 saw two of the largest quarterly ranges in three years and when put in the broader context, this quarter remains well-within the confines of the 4Q trading range – as such, we may yet see some consolidation before the next big move, especially as prices target a key resistance confluence just higher at 1278/79. 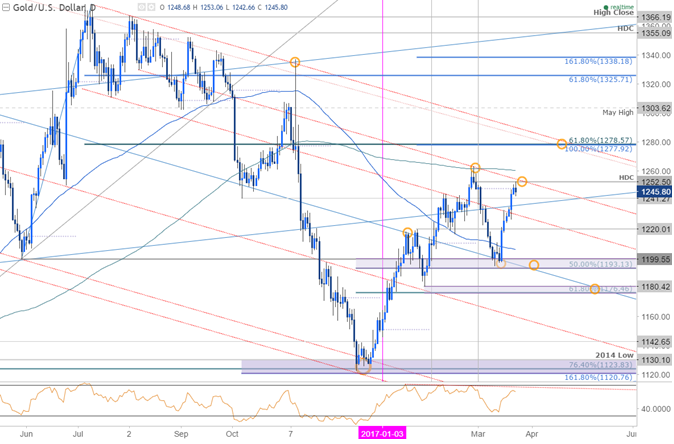 A closer look at price action highlights near-term resistance at the 2017 high-day close at 1252- this level converges on a parallel extending off the August opening range lows (8/8) heading into the March close and is backed closely by the 200-day moving average. From a trading standpoint, the risk remains for a pullback off these levels into the start of the quarter but the broader outlook remains constructive while above the descending median-line (blue).

Ultimately we’ll be looking for a breach higher to target a critical resistance barrier at 1278/79 where the 100% extension of the advance converges on the 61.8% retracement of the decline off the 2016 high and slope resistance off the record 2011 highs- we’re likely to get a bigger reaction off this zone. Interim support rests at 1220 backed by 1193/99 with our bullish invalidation level set to 1176/80 – a region defined by the 61.8% retracement of the advance and the late-January lows. A break below this region would put the broader downtrend back in focus. Bottom line: game plan into 2Q is look for an early pullback to target a high deep in the quarter near the upper parallels.

Want to read the rest of this gold forecast? Get the full report here !