It’s the start of a new quarter and despite all the recent Fed rhetoric crossing the wires, it’s important to remain focused on what matters- i.e. price action. Here are the key levels to consider for the DXY as we head into the October open. 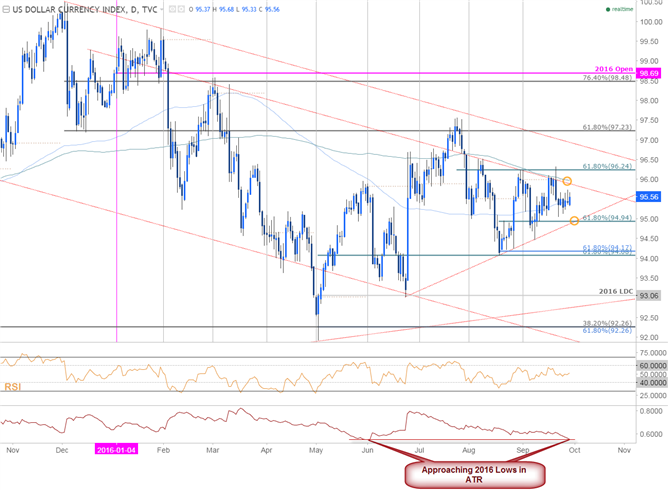 The Dollar Index (DXY) has been trading within the confines of these descending median-lines off the late 2015 high with prices continuing to consolidate off the August highs. Note that volatility is approaching the yearly lows and the last time ATR was this tight was in late-May, right before the June sell-off.

Heading into the start of Q4 we’ll be looking for a break of this consolidation range to offer further guidance on our medium-term directional bias. A downside break of this formation is favored with a break below near-term support aty 94.94 shifting the focus back towards key support at 94.08/17- a region defined by the 61.8% retracement of the August rally and basic trendline support extending off the June lows. A break below this level targets subsequent support objectives at the 2016 low-day close & the 2011 trendline support around the 93-handle.

Interim resistance stands at 95.90/99 where slope resistance converges on the 200-day moving average and the September open. A breach / close above the 61.8% retracement at 96.24 (bearish invalidation) would be needed to validate the breakout with such a scenario eyeing the upper parallel backed by 97.23.

Keep in mind heading into the last three-months of the year, expectations are that the Fed will follow a similar path to 2015. That said, Fed Fund Futures are still pricing a 54% chance the committee will raise rates at the December meeting. Hawkish remarks may prop up the dollar over the near-term, but the larger focus is likely to fall on next year’s rotation within the FOMC as central bank officials forecast a lower trajectory for interest rates. In turn, the U.S. dollar stands at risk of facing headwinds over the near to medium-term as Chair Yellen and Co. look poised to further delay the normalization cycle over the policy horizon.. 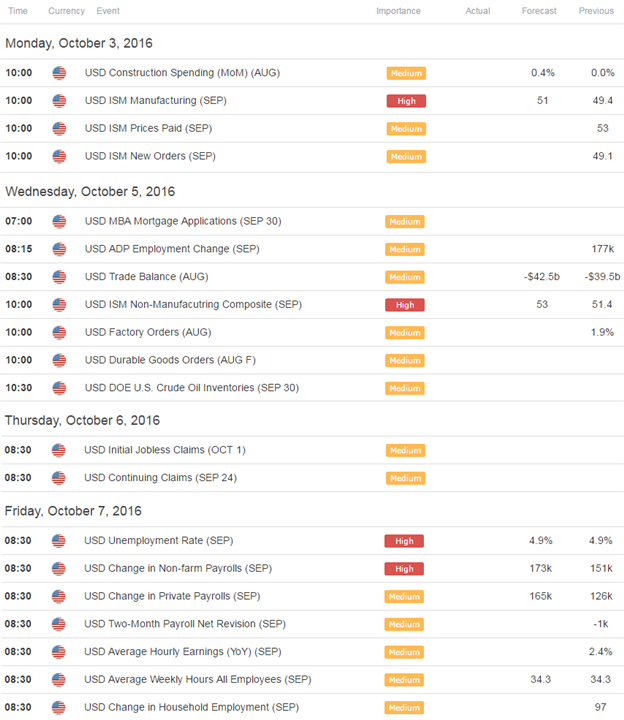