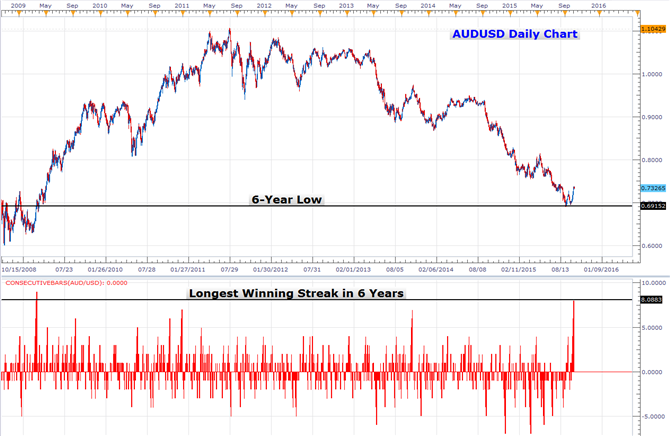 AUDUSD Sees Longest Rally in 6 Years, But There is Reason for Concern

Download the Consecutive Bars App to incorporate into your own trading strategy, here

The Australian Dollar closed Monday’s trading session with an exceptional record. AUDUSD closed higher for a ninth consecutive day. Using the FXCM Consecutive Bars Indicator on the chart below, we can see the last time the pair experienced such a remarkably consistent bullish performance was back in March 2009. The longest string of daily consecutive losses over the same period was an eight day stint. This does not necessarily mean the pair will inevitably turn or that the next 9-day rally might happen in six years. This does however suggest that the pair’s performance was out of the ordinary.

In addition to using the app to find extremes, it can also be used to uncover patterns. The AUDUSD declined more than 15 percent from May 14th to September 4th 2015. As the Aussie fell to a 6-year low, its bearish performance came in smaller waves on the consecutive bars app – as can be seen on the chart below. The resulting pattern is a ‘negative divergence’ and can often be a signal to a changing tide of conviction and then trend. Indeed, the Australian Dollar then rallied more than 5.47 percent against the US Dollar during its longest winning streak in six years.

Looking ahead, Australia’s September Employment figures is a calendar highlight on Thursday. The country is expected to have add 9,600 jobs with the unemployment rate holding steady at 6.2 percent. Last week, the Reserve Bank of Australia opted for a status quostance leaving rates unchanged at 2.00 percent. Currency Strategist Ilya Spivak said that a soft reading may fuel speculation that easing will come relatively sooner than later. This in turn may weigh on the Aussie in addition to what the technicals show. 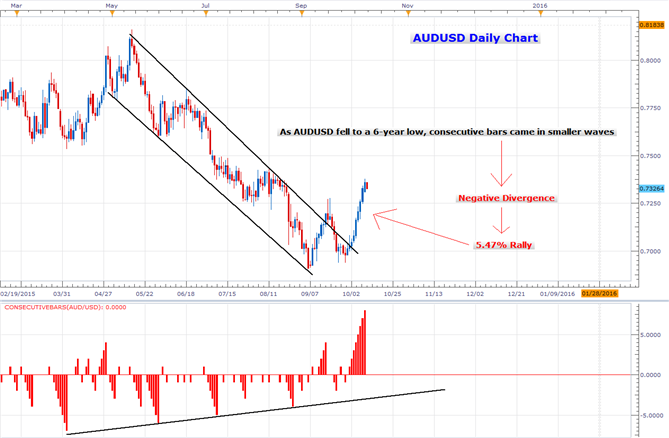