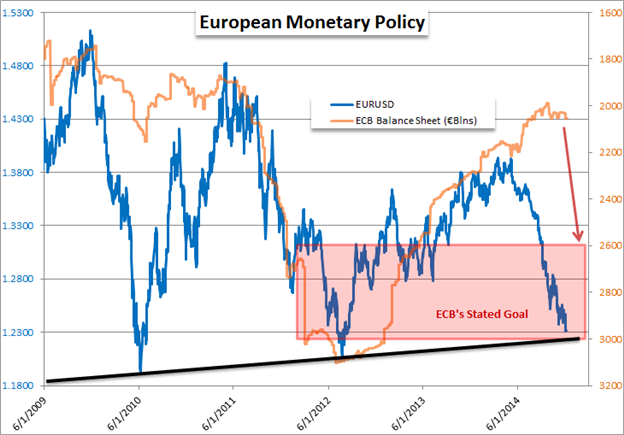 EURUSD, EURCHF - The Effectiveness of Stimulus

EURUSD Through the second half of 2014, EURUSD dropped from 1.4000 to well below 1.2500. While this decline encompasses a number of elements, much of the momentum was a side effect of the European Central Bank’s efforts. Whether you believe their efforts intentionally targeted the exchange rate or are purely focused on ending dis-inflation and recharging stagnant growth, the connection to price is clear. Much of what we have seen from the Euro’s decline through the end of the year though was in anticipation of a growing ECB balance sheet. That means the market has already adjusted for the stimulus swell to some extent, but a full scale effort will likely result in a much further decline.

The implementation of a full-scale Quantitative Easing (QE) program like the Fed’s or BoJ’s could help drive EURUSD to the next phase of a medium-term bearish trend. Yet, even if it lacks as a catalyst, there is also the fallout from a global ‘risk aversion’ shift that draws speculative capital out of the low-return-high-cost European capital markets and a likely rise in sovereign yields that will revive fiscal concerns. I will watch this fundamental wave build with intentions to short below 1.2200/1.2000 (a zone of support that shapes the floor of a more than decade long wedge formation).

EURCHF Through 2015, the European Central Bank will likely leverage the most aggressive expansion of monetary policy accommodation of all the major central banks. That will put pressure on all of its pairings, including EURCHF. However, there is a very important quirk to this pair: the Swiss National Bank’s primary policy agenda is to keep the exchange rate above 1.2000. Having moved beyond a brief threat posed by the Swiss Gold Referendum vote, the central bank can keep to its policy of ‘buying unlimited currency’ (largely Euro) to sustain the floor. That effort will likely prevent the exchange rate from dropping below the managed support, but it does little to see the market move higher.

I like the long side with a stop 25-50 pips below 1.2000. With the probability of a breakdown diminished by the SNB’s vows, there are two scenarios that I am considering. The first is that the group does nothing more than maintain its floor, which means the market could be anchored to 1.2000 for many months – much like the period in 2012. I have learned from that last instance (this pair was also one of my top setups for that year) to be patient. Alternatively, the SNB may recognize it will be fighting a constant uphill battle and adopt additional policy that negates the tension. Negative rates on foreign capital for example could divert outflows of Eurozone capital to other countries and take the pressure off. As can be seen with the Swiss Libor rate below, the market expects more moving forward. 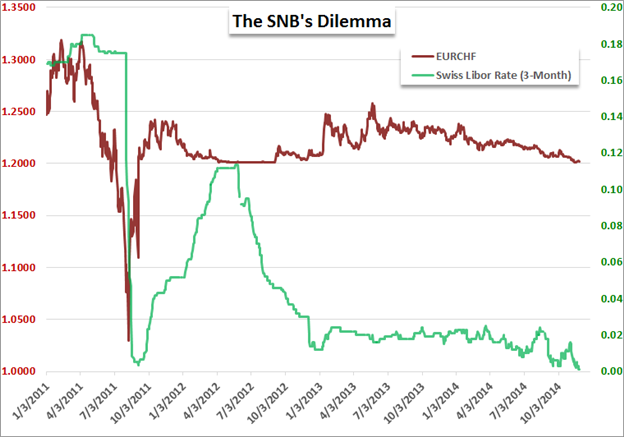