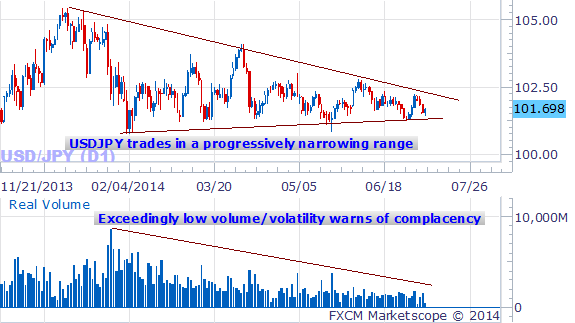 Is it a Good Time to Get Long the Dollar versus the Japanese Yen?

- US Dollar trades near range lows versus the Japanese Yen

- We’re waiting for a drop towards bigger support

The Dollar is trading in a tiny range versus the Japanese Yen. Is it a good time to buy? These are the price levels we’re watching for potential trades.

The USDJPY currently trades towards the bottom of its tiny trading range. In order to gauge whether a breakdown is possible we take a look at the most significant levels of trader interest—prices at which volume was highest. 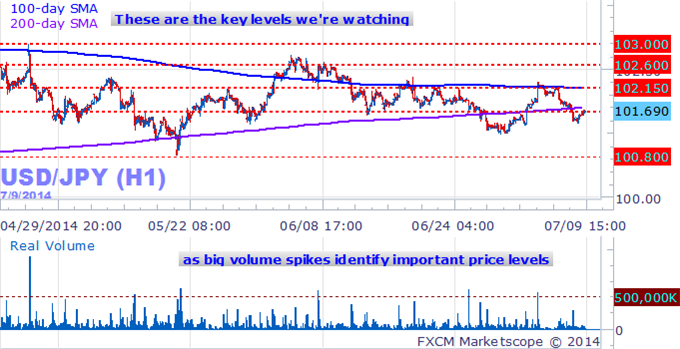 Put simply, these are the levels which traders have traded most aggressively as the pair sticks to its narrow range. If there was significant selling interest as the pair pulled back from ¥102.15, for example, we might expect many of the same traders to sell once more if price approaches that level.

It bears mention that there was no such spike in volume as the USDJPY traded into multi-month lows near ¥101.20. We have to go back to the May low at ¥100.80 to see a more significant jump in trading volume. All the while, there are a number of important resistance levels just above current price. 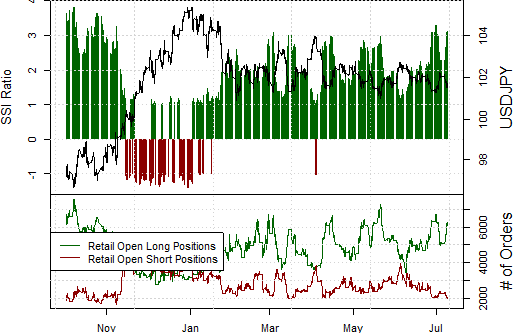 One-sided positions suggest the pair is likely to trade higher, but potential reward on the trade looks limited in comparison to potential risk. According to our volume data, big support is at ¥100.80—currently 90 points from market price at 101.70. Important resistance starts at ¥102.15 which would put our first price target on a long position a mere 45 points away.

With twice as much risk as potential reward (90 versus 45), it seems excessively risky to buy USDJPY at current levels. Instead we might look to buy if price dips back towards the 100.80 lows with a target for range highs.

The long-term consolidation pattern suggests that the USDJPY might break significant price levels and could be worth a buy. Yet until that happens we’ll look for range trading opportunities. Follow future updates via e-mail on this author’s distribution list.

Download the release of FXCM Volume and Transactions figures via FXCMApps.com.