- US Dollar tends to start off the year strong.

The beginning of the month warrants a review of the seasonal patterns that have influenced forex markets over the past several years. Last month’s review saw several currencies and instruments break from their seasonal patterns: the Japanese Yen was the top performer in January, typically one of its weaker months. Similarly, the S&P 500’s streak of four consecutive positive Januaries was broken.

Seasonality, like any form of analysis, doesn’t guarantee a clear look into the future, but it is another useful way to monitor market conditions when establishing trades. Will the recent British Pound weakness accelerate? Will the Australian Dollar prove resilient amid emerging market concerns? February seasonals give us insight to both of these answers. 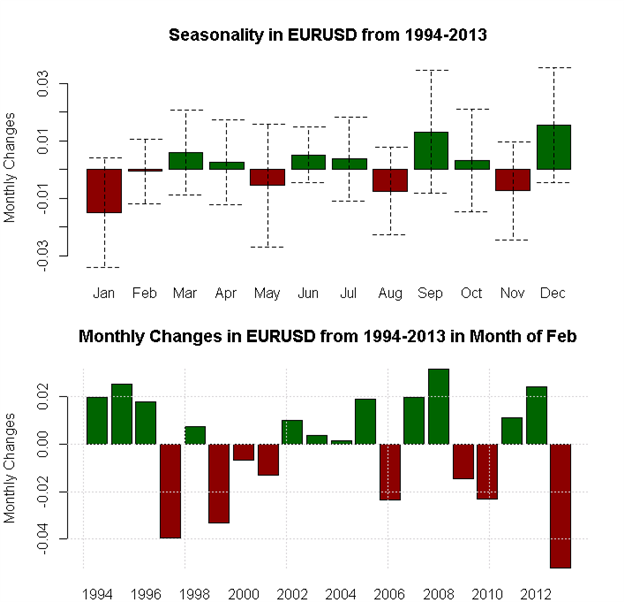 February has been a neutral month for the EURUSD the past 20 years, although last year was its worst year in this particular time series. Recent history doesn’t offer many clues either, with 2 of the last 3 years being positive in February, 3 of the last 5 being negative, and the past 8 overall being split 50/50. 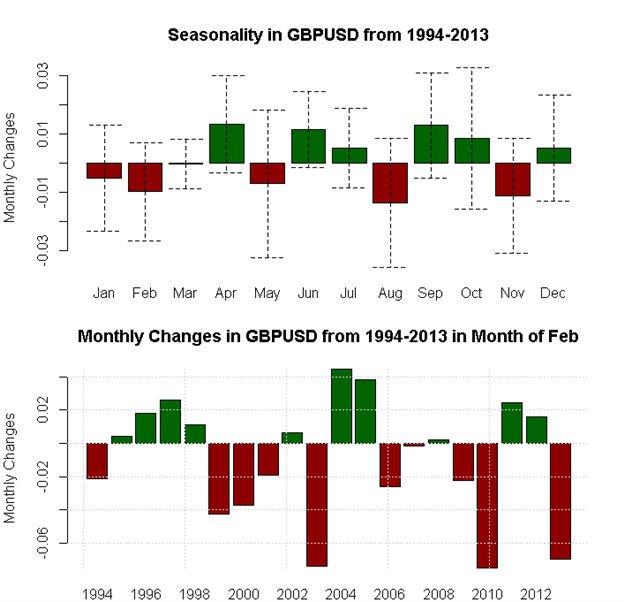 February is the third worst month of the year for the British Pound, having suffered its third worst loss in the month last year over the past 20 years. Certainly, the bad has outweighed the good: although the past four years have produced an equivalent amount of both positive and negative Februaries; losses have been three times as great as or more than gains during this small sample size. 5 of the past 8 years overall have produced losses in the second month of the year. 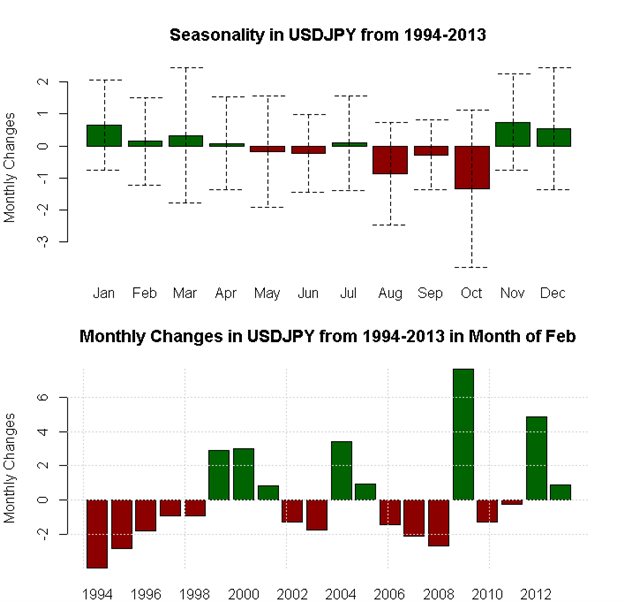 The early part of the year tends to be bearish for the Japanese Yen (bullish USDJPY), as gains have occurred in each of the first three months on average over the past 20 years. The Yen is bucking these seasonal considerations in the face of swelling risk aversion. Recent capital flows out of Japan suggest a more bearish risk environment over the coming weeks, drawing the early-year seasonal patterns into question. 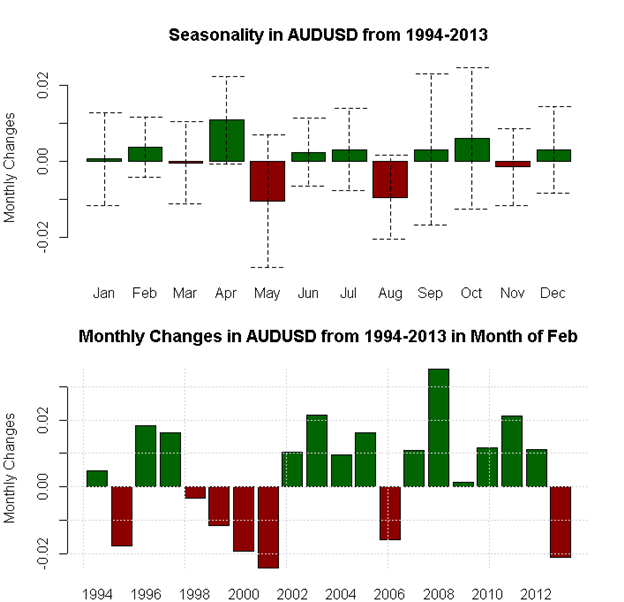 The second month of the year has produced modest gains for the Australian Dollar over the past 20 years, although recent history is more optimistic. Last year’s loss during February – the second largest in this sample – was the first decline in February since 2006. With 10 of the past 12 years seeing the AUDUSD rally in February, seasonal patterns dictate a more bullish bias. 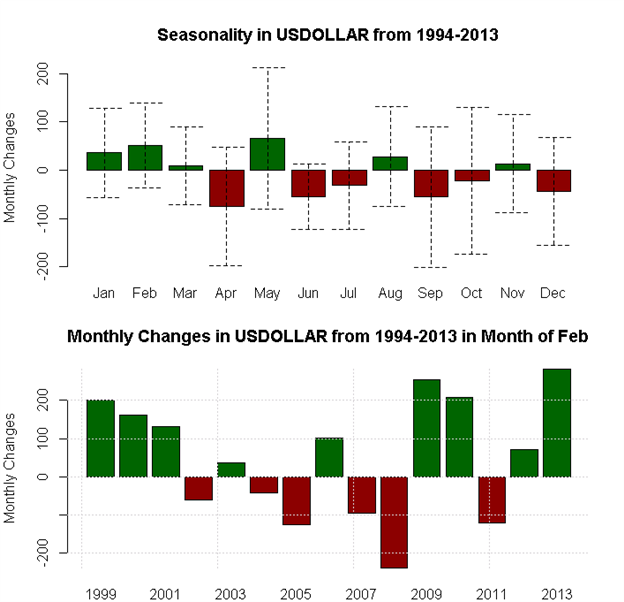 As an amalgamation of the Australian Dollar, British Pound, Euro, and Japanese Yen, the USDOLLAR Index serves as a proxy for the US Dollar more broadly. Historically, February is the second best month of the year for the USDOLLAR. 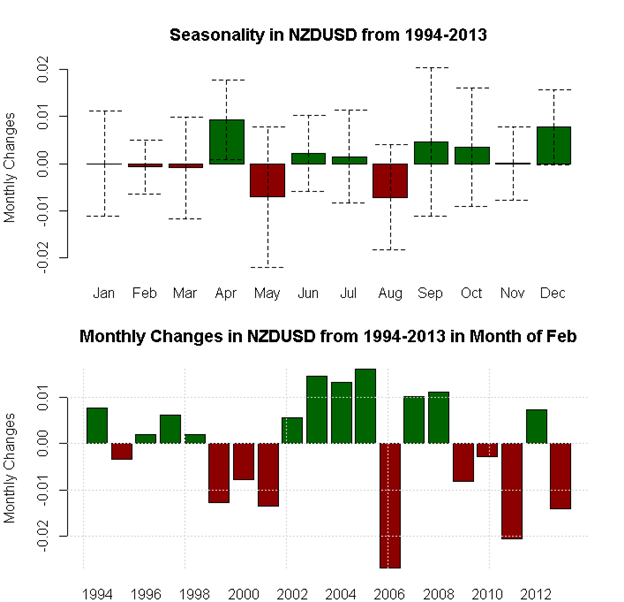 The New Zealand Dollar has seen little continuity in trend over the past several Februaries and price action in the first few months of the year tends to be inconsequential in NZDUSD. Our seasonality forecast is neutral, although it is worth noting that the NZDUSD has dropped in 4 of the past 5 Februaries. 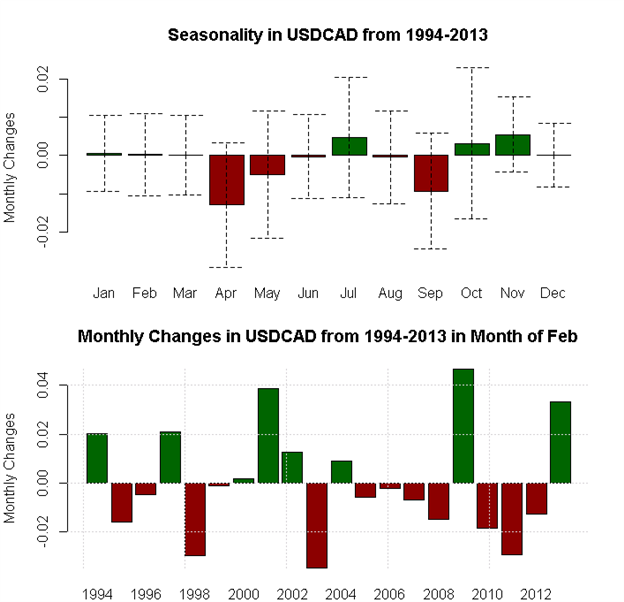 The USDCAD has shown little rhyme or reason to its trading patterns in February, with last year’s gain having been the first since 2009, and that gain the first since 2004. However, because the gains have easily outweighed the losses, even though losses during February have been more frequent, the month is neutral overall the past 20 years. 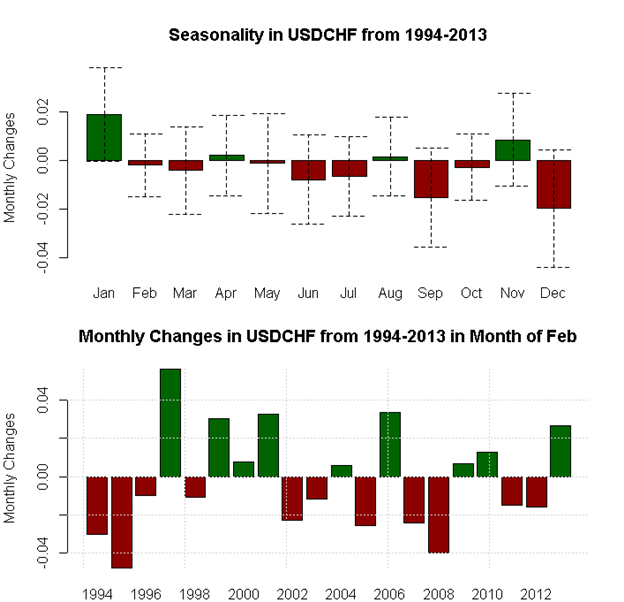 Seasonality favors a slightly weaker USDCHF in February. We’re now entering a period in which seasonal influences tend to loosen up. Slight losses are favored in line with the mostly neutral EURUSD forecast, and the past 8 Februaries have seen an equivalent amount of gains and losses. 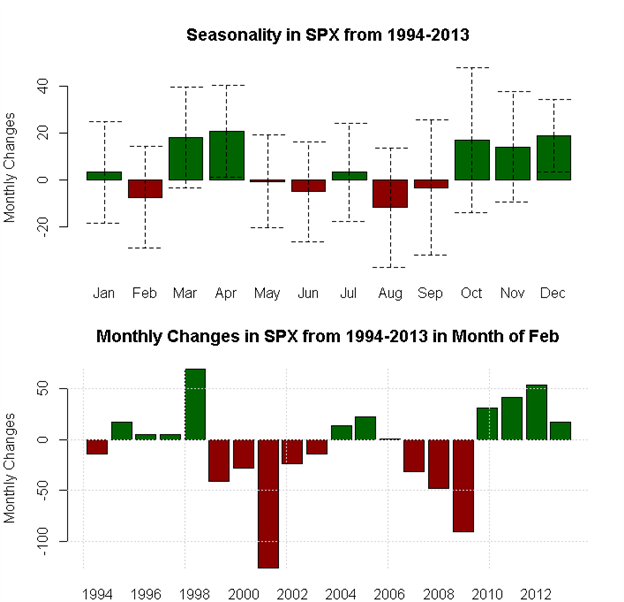 So goes January, so goes the rest of the year? Investors better hope not after a surprisingly poor start to the year for the S&P 500. True, February has produced four consecutive monthly rallies in US stocks; but January had produced three in a row previously, and that streak was snapped. Overall, February has been a negative month for stocks on average since 1994, and the weak January may have primed the market for further weakness. 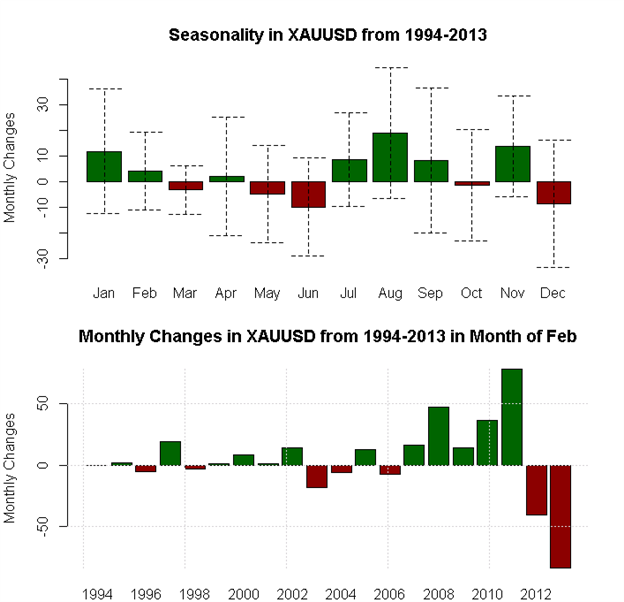 February has produced modest gains for Gold on average since 1994, although it is the second weakest positive month during this period. The past few years have seen increased volatility during February, and the absolute change in price each February (going back to 2007) has easily eclipsed the average gain over the past 20 years. If recent history is a guide, increased volatility should be expected, not necessarily direction.