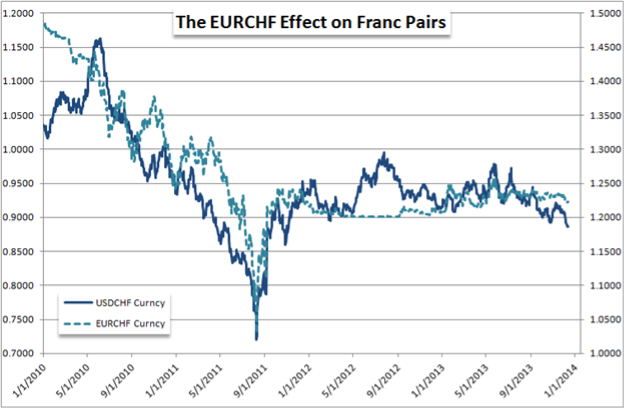 -Severe disparity in monetary policy between RBA and RBNZ

There seems a remarkable relationship between the Swiss franc and Euro. The Eurozone is Switzerland’s primary trade partner and international financial companion. This means whatever befalls the larger, regional economy typically is mirrored by the smaller landlocked country – for better or worse. From a currency perspective, this seems to support a remarkable correlation between the Euro and Swiss franc against common counterparts. For example, the correlation between EURUSD and USDCHF is close to -0.90 – meaning the two moved in the opposite directions most of the time and to the same severity.

This relationship, the outlook for monetary policy and the Swiss National Bank’s (SNB) commitment to the 1.2000 EURCHF floor significantly boost the appeal and probabilities of a USDCHF long position. Moving forward, if the franc continues to appreciate against its counterparts (as it has in the USDCHF below), the spillover would inevitably draw EURCHF down and incur an SNB response. Otherwise, looking at the traditional EURUSD (remember, assuming it maintains an inverse relationship to USDCHF); the ECB is on the path for more stimulus and the Fed is talking about the Taper. That can offer a synthetic boost to USDCHF. I will look for a long position with a first target of 1.3000 (momentum can offer a much more profound ultimate objective) with a stop on a close below 1.1500.

Both a big-picture fundamental and technical review of the AUDNZD suggest we are nearing serious turning point. Since the exchange rate was floated nearly 30 years ago, the bulk of its price action has fallen between a historical range of 1.3650 and 1.0500. While that may be half the range of the range of the USDJPY or GBPUSD over the same period, it is nevertheless remarkable for its consistency and our proximity to the ‘floor’ near the start of 2014.

There is a good reason why we have dropped so rapidly over the past few years to cover the entire range: a severe disparity in monetary policy. Though much of the world was forced to cut rate over the past five years, some move sooner and are further earlier in the upswing of the cycle. This is the case between Australian and New Zealand. The RBA extended an easing regime (interest rate cuts) through 2013, while the RBNZ changed to outright threats of an expected 2.25 percent increase through 1Q 2016. That is incredible, but both of these are likely extremes. The RBA has little room to cut further and will likely start to warn of hikes in 2014. Meanwhile, the RBNZ can’t threaten more severe movement without inflation. As we retrace fundamental and technical extremes, I like a long position with a stop in a higher time frame (weekly or monthly) close below 1.0500 as a stop. 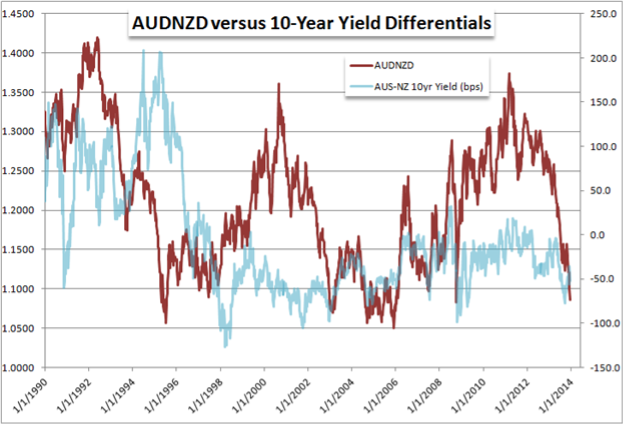