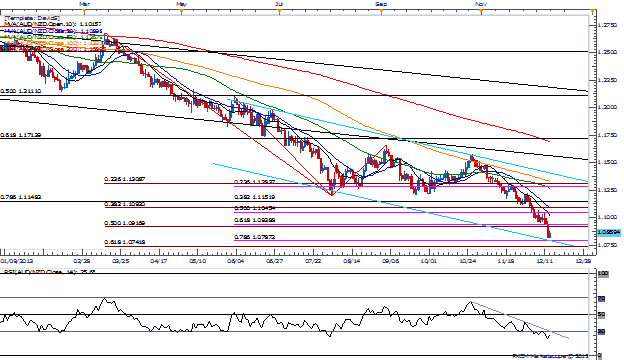 Stay Nimble But Don't be Too Prudent

-Be quick to asses changing conditions, but not too quick to cut profits

-Given the opportunity build larger positions

Going into 2013, I ran with the theme of ‘Staying Nimble’ as the markets moved away from the ‘risk on/off’ trade. The more prudent mentality helped to improve the ratio of winners/losers, but seems to have limited the potential of my longer-term trading strategies.

The pair that comes to mind is the AUDNZD. Based on the fundamental developments/outlook, I had strong conviction that the aussie-kiwi would continue to carve a bearish trend in 2013, but missed some of the meaningful declines as the pair slipped to fresh lows throughout the year.

Given my heavily bearish bias for the AUDNZD, I may have been able to enjoy the decline from the 1.2500 region as it preserved the downward trend dating back to 2011, and could have been more aggressive with the trade. However, in order to ‘stay nimble,’ I was booking gains a bit early and found myself unable to implement a longer-term strategy given the more-prudent approach.

Even though I was able to catch most of the declines, I should have built a larger position in the AUDNZD as the pair continues to make fresh lows going into the end of 2013. For 2014, it looks as though there will be more opportunities to the downside as the fundamentals and technicals remain bearish, and will take a less-prudent approach on the pair as the Reserve Bank of New Zealand (RBNZ) looks to normalize monetary policy, while the Reserve Bank of Australia (RBA) remains at risk of further embarking on its easing cycle.