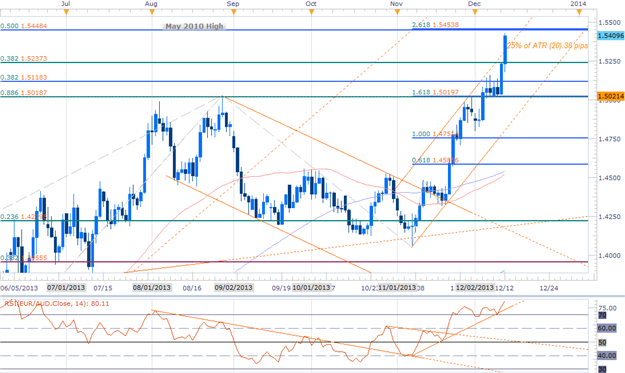 Hesitation-When Technical Clarity is Overshadowed by Noise and Doubt

-Lost opportunities can be costly to mental capital

-Allow price action to speak and listen to it carefully

-Markets are not structured and picture perfect, learn to adapt

Every year we are charged with writing a piece on our worst trade or lessons learned and when reflecting back on this year, it was hard to pinpoint a singular event. The one main theme that kept coming up was that my worst trades in 2013 were the ones I didn’t take. That’s right- lost opportunities. Whether it’s on account of a lack of clarity, headlines, or just being trigger shy, hesitation was my biggest obstacle this year. Although a true trader has no time to entertain the notion of regret, it’s important to note not only mistakes, but also lost opportunities when attempting to objectively assess one’s own performance.

We say it all the time, “plan the trade, time your entries, stay disciplined, wait for conviction, etc.” All valuable lessons one should strive to adhere to. However it’s important not to lose sight of one simple fact- markets don’t operate in a vacuum, nor do they adhere to a set structure. As such, we need to be prepared to act when the situation changes or things don’t go exactly as planned.

Consider the EURAUD daily chart above. We spoke about this setup at length in DailyFX on Demand and the technical breach above channel resistance early November reinforced our topside bias. While the break looked contentious at first, the subsequent rally on the 21st achieved our primary objective at 1.4585. I took a buy on the pullback / break of resistance approach on the pair as we eyed objectives at 1.5020, 1.5118, and 1.5237. However the pullbacks were extremely shallow and although the technicals on both the EURUSD and AUDUSD respected such a bias, I refrained from pulling the trigger, always looking for a better entry lower down- which never came. Breaks of resistance were another opportunity to get long but headlines were littered with bearish views on euro and how the ECB was getting ready to ease policy even further. Although my technical approach warranted action, skepticism held me back and in hindsight, there were numerous entries that if taken with a 38pip stop (1/4 of the daily ATR) would have put this trade in the black. When all was said and done, the pair had come just shy of key technical resistance at 1.5440 by early December when this piece was written.

While you never want to chase a trade, short-term traders such as myself relish these moves because when the directional bias is clear, it allows us to maintain core positions as we scalp the broader trend. The old cliché holds true: you have to be in it to win it. However when the market makes a decisive move, respect it- when that move is further validated, trade it – and when everyone doubts the move, press it. The moral of the story here is when the market speaks, we should listen. If you have a valid game plan and conviction in your strategy, trust price action. It will never lie. Lost opportunities were the highlight of my mistakes this year.