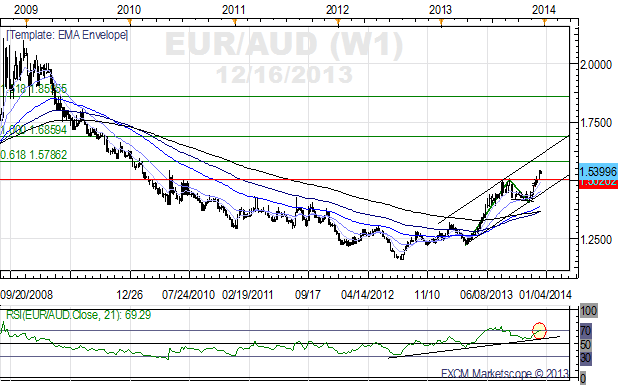 EURAUD & GBPNZD – The Other 'Great' Rotation

- The other “Great Rotation” is the return of capital to Europe.

- A stronger 1Q'14 would be bullish EURAUD through the rest of the year.

Coming into 2013, many market commentators proclaimed that it would be the year that the US economy finally picked up off the ground, and that investors would reallocate funds from significantly overbought US Treasuries to more cheaply-valued US equities. The other “Great Rotation” is the return of capital to Europe.

Money returning to Europe has two roots. First, growth is starting to return. The United Kingdom is the fastest growing Western economy. Peripheral Euro-Zone nations, while burdened with high taxes, low government spending, and weak labor markets, have seen their respective recessions start to ease. The resurrection of the European consumer over the coming years will be a major draw for foreign investment in the region.

Second, I believe that the end of liquidity programs but not low interest rates forces investors into the second tier of yield – improving, but stable growth. As concerns over emerging markets has risen alongside the chances of QE3 being tapered, investors have started to shift capital away from some of the major beneficiaries in FX – the Australian and New Zealand Dollars. The EURAUD and GBPNZD may be best positioned to take advantage of these shifting themes.

EURAUD – The EURAUD remains in an ascending channel off of the March and November 2013 lows, with a parallel drawn to the August high. An extension taken off of these prices points to a 100% extension at A$1.6889. Note on the weekly chart that the momentum structure – indicated by the short-term moving averages rising above the longer-term ones (from light to dark, EMAs: 8, 21, 34, 55, and 89). A sustained hold above 1.5000/20 through the 1Q’14 would give confidence for strength through the year. 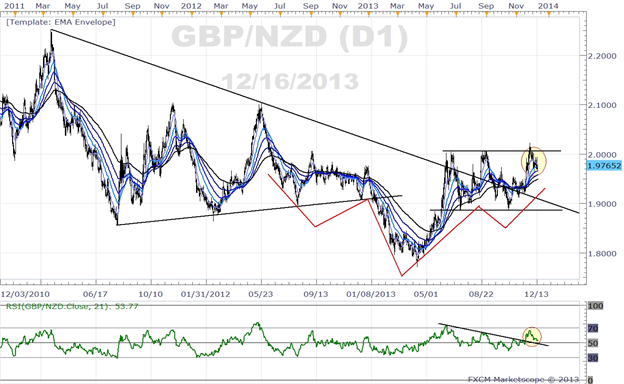