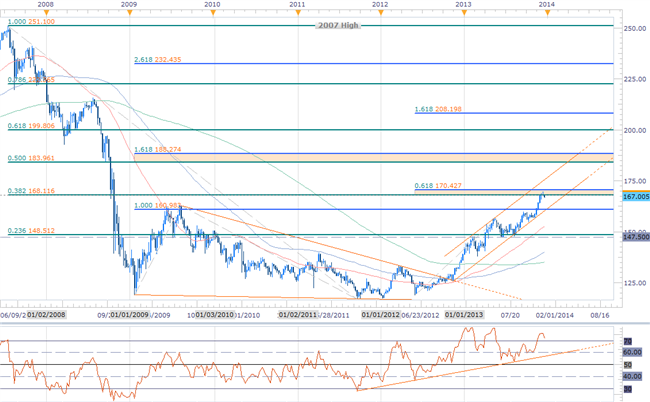 As we open up 2014 trade, the single most important theme we’ll be watching for is divergences in the monetary policy outlook for the world’s largest central banks. One of my trades of the year heading into 2013 was the long side of GBPJPY, a trade which was predicated by both the technical breach of a multi-year long consolidation formation and a stronger recovery in the UK economy. Although the sterling struggled a bit early on against the greenback, versus the Japanese yen the pound was by far the strongest performer amongst the majors, with an advance of more than 15.5% ahead of the close of 2013 trade. Arguably among the least dovish (dare I say “hawkish”) central banks, the BoE looks poised to begin throttling back and possibly even ready to move on rates in 2014, as will be a theme for these setups.

As the BoE looks to begin ending the easing cycle, the BOJ remains committed to achieving its 2% inflation target by 2015, and as such, our bias remains unchanged from last year’s forecast. We continue favoring the long-side of GBPJPY for short yen exposure while above 147.50.

The breakout of the multiyear consolidation formation seen last year is still in focus, and although our broader bias remains weighted to the topside, the pair looks vulnerable as we close out the year just below key resistance. Look for a pullback early next year to offer long entries with a breach above immediate resistance at 168.12-170.40 targeting objectives at 184-188.27, 199.80 and 208.20. One of the more compelling technical factors is also the fact that momentum has now broken into overbought territory from sub-30 for the first time since 1996, when the pair made fresh 6 year highs before mounting the assault on the 15-year highs subsequently made in 2007 (which are still in place). Risk for a near-term correction mounts with a break below the 161- handle, and only a move sub 147.50-148.50 invalidating our longer-term outlook. 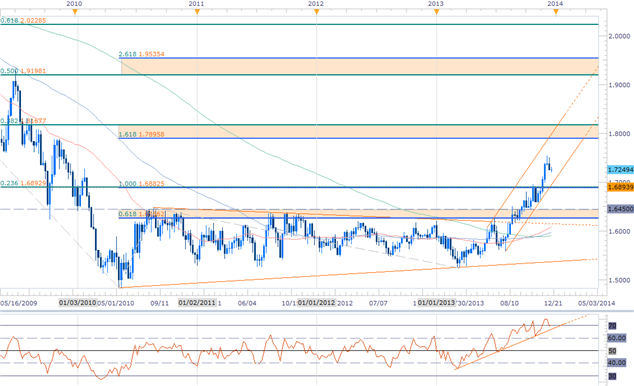 Although not quite as compelling a case, from the fundamental side, the GBPCAD also looks poised for further gains heading into 2014, with the pair still short of key resistance at 1.7895-1.8167. Similar to the GBPJPY (although lagging), the pair broke to the topside of a multi-year consolidation formation this year, with a subsequent breach above key Fibonacci resistance at 1.6882/93 keeping our focus higher in the near-term. I’ll remain constructive above this level, with only a break below the 1.6250-1.6450 support range invalidating our broader outlook.

Note that the momentum signature has continued to respect the 40-threshold as support since the 2010 low, with this year’s breach above the 70-mark for the first time in 6-years keeping our focus higher in the medium-to-long term. Look for a break below the support-trigger to suggest a near-term correction, with such a move offering favorable long entries lower down. A breach above 1.8167 targets objectives at 1.9198-1.9535 and ultimately 2.00-2.0228.