- The Euro likewise tends to appreciate, lining up well with overall uptrend

The S&P 500 has rallied in December through a whopping 16 of the past 20 years, while the Euro sees a comparable tendency. How does this fit into our forecasts?

Our recent forecasts leave us mostly in favor of US Dollar and Japanese Yen weakness, and the trading bias lines up fairly well with seasonal forex tendencies.

Beyond the USD and JPY, it’s worth noting that the New Zealand Dollar and Swiss Franc likewise tend to do well in December. The net effect is to give us a further bearish bias on the Dow Jones FXCM Dollar Index, and a break below key support at 10,535 would favor a run towards fresh lows.

See the full rundown of seasonal patterns broken down by currency pairs below, and sign up for future updates via this author’s e-mail distribution list. 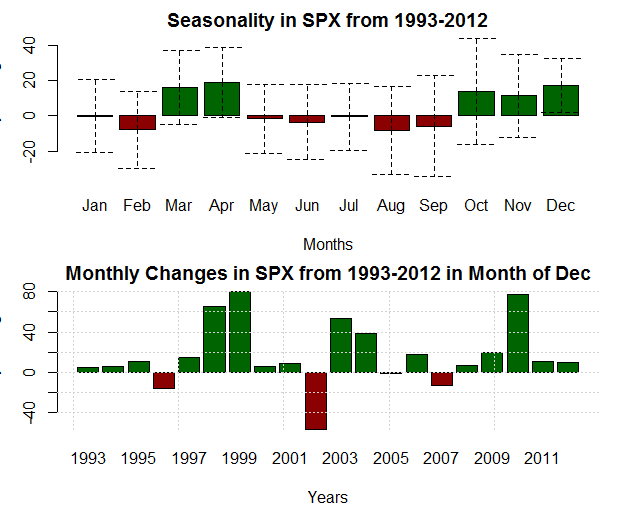 The so-called “December effect” in the S&P 500 seems real, as the past 20 years have seen stocks rally in all but four—good for an 80 percent rally rate.

Obviously past performance does not by any means guarantee future results, but stocks are already modestly higher through the second week of the month.

The pressure for mutual funds and other money managers to “window dress”, or by outperforming assets, may push equities to further highs. And indeed recent correlations may likewise favor EURUSD strength.

Forex Seasonality in the Euro/US Dollar 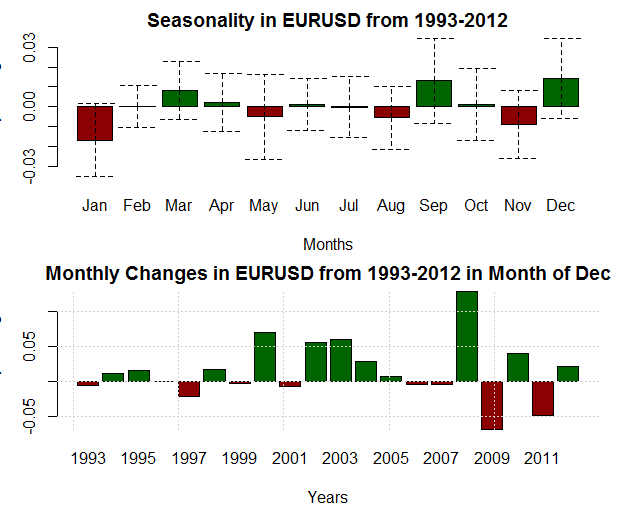 The Euro tends to appreciate in December, having rallied in just over half of the past 20 times in the last month of the year (we use Deutsche Mark exchange rates prior to 1999).

Though well-documented, there’s no obvious reason for the seasonal tendency. In fact, the past 7 years have seen more declines than appreciation.

Yet forex seasonality does line up well with our sentiment-based forecast, and we remain in favor of continued EURUSD gains. 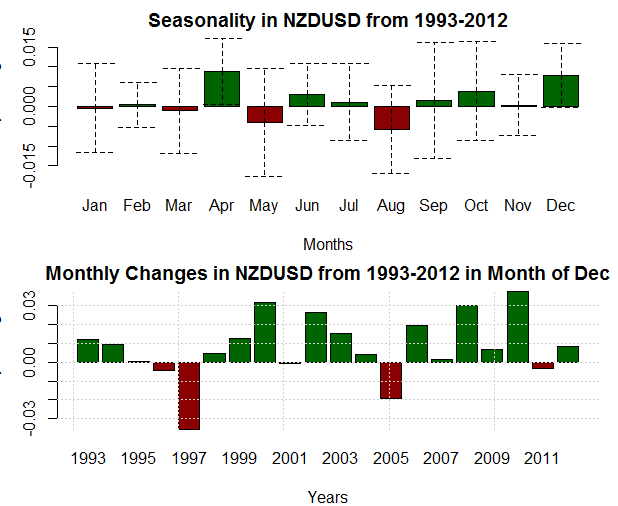 The New Zealand Dollar shows a strong tendency to appreciate in December, having rallied in 16 of the past 20 years. It is thus far modestly higher in the first two weeks of trading, and an overall bullish outlook for the S&P 500 should favor continued Kiwi Dollar gains. 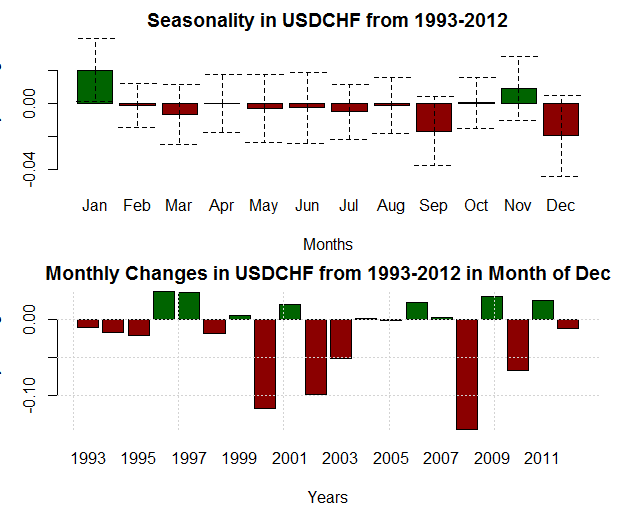 The Swiss Franc tends to appreciate in the month of December and yet give back those gains in January, leaving us with a roughly neutral seasonal trading bias over the coming two months. 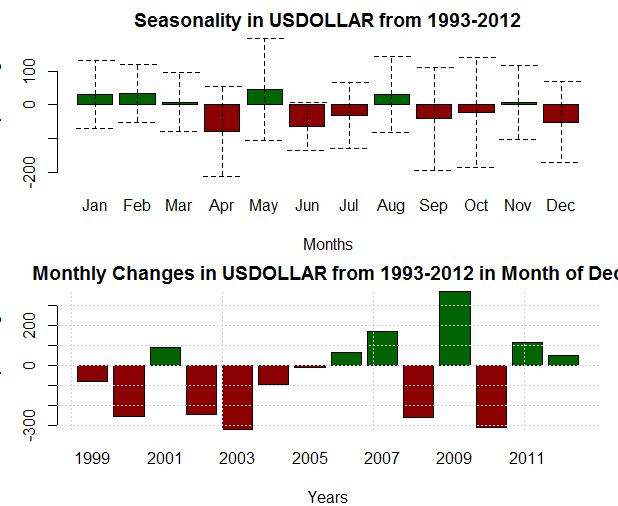 The Dow Jones FXCM Dollar Index has seen no discernible seasonal trend in the past 13 years, running counter to the clear trend in favor of Euro strength. Yet our broader Dollar-bearish trading forecast leaves us mostly in favor of continued weakness. 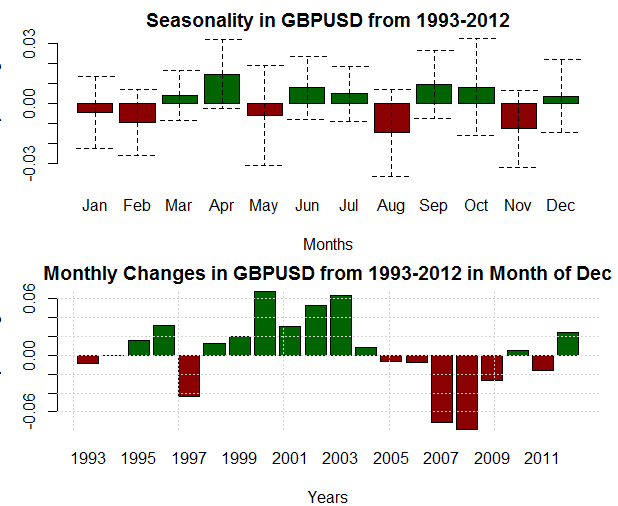 The British Pound has seen no major seasonal trend in the past 20 years of trading through the month of December. 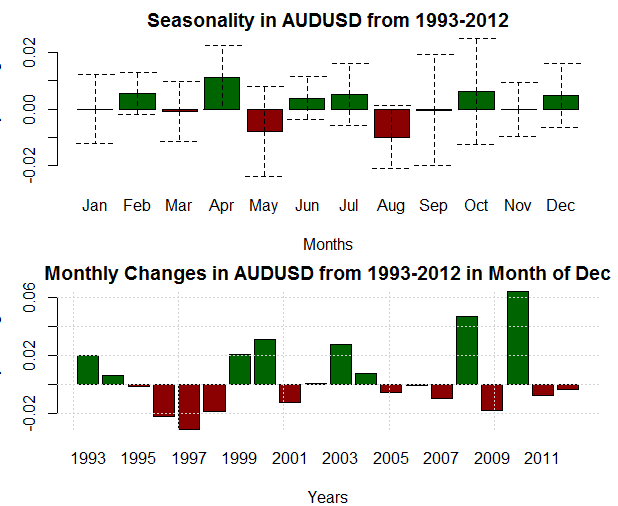 The Australian Dollar has not shown an especially strong tendency to appreciate or depreciate in the month of December. 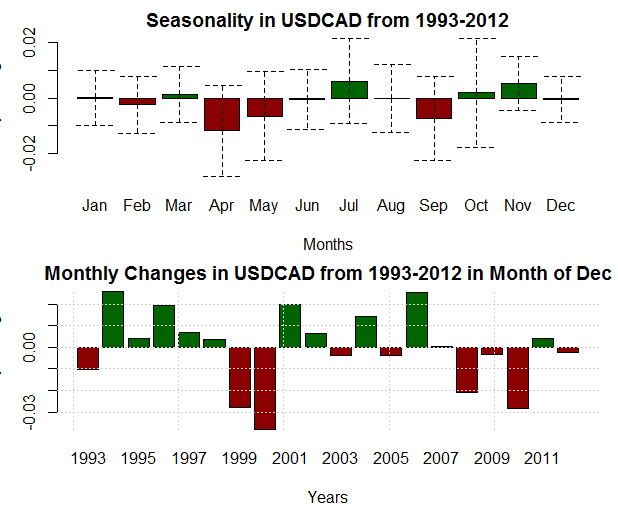 The Canadian Dollar shows weak seasonal tendencies in the month of December, and our seasonality forecasts are as a result neutral the USDCAD. 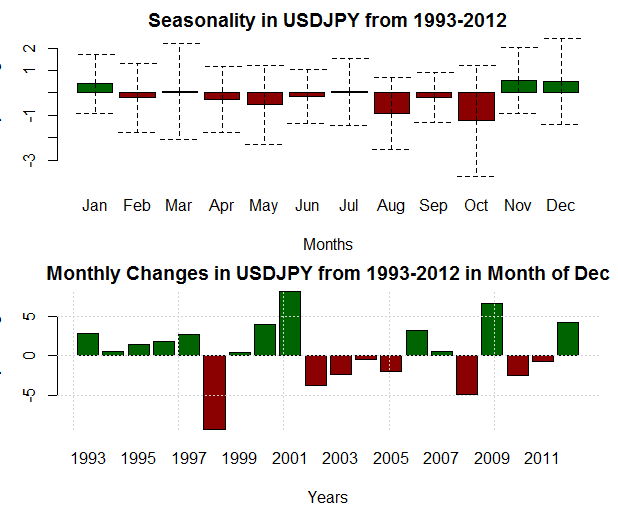 The Japanese Yen shows little tendency to move up or down through the month of December, rising and falling nearly the same number of times through the past two decades of trading.