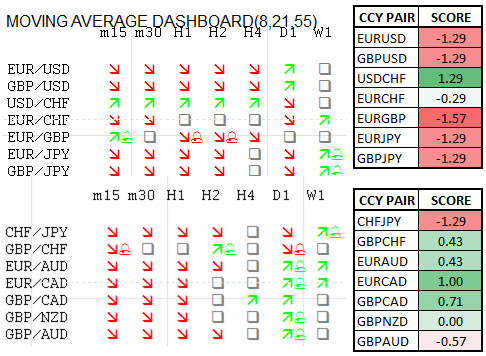 Want to add the Moving Average Dashboard to your charts? 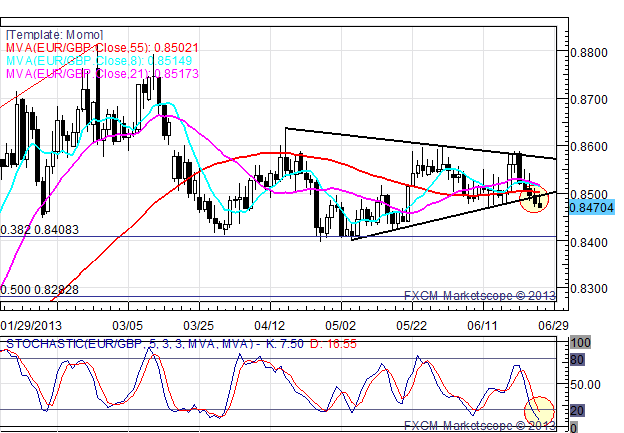 - EURGBP has the most bearish intraday/intraweek score at -1.57; notably momentum behind all EUR-based pairs has stalled in recent days. Yesterday, I noted that the British Pound looked favorable against the Euro.

- ST moving averages have already turned over; a daily bearish crossover is imminent, which at present time would bolster the EURGBP bearish score to -2.43.

- Slow Stochastics (5,3,3) have entered oversold territory, suggesting that absent a sharp move lower, the EURGBP might endure some intraweek consolidation to clear out technical divergence and exhaustion; the preference is to sell rallies.

- The Euro looks weak overall, now that a slew of issues once forgotten are coming back into the foreground quickly. Indeed, the Euro-zone crisis may be more influential than previously believed over the coming months.

*Scoring methodology: there are seven time frames, ascending from m15 (15-minutes) to W1 (one-week). In ascending order, each pair is assigned a value from -7 to +7 based on the trend apparent on the specified time frame (I.E. a m15 uptrend equals +1, whereas a H1 downtrend equals -3). If neither an uptrend nor downtrend is present, the trendless timeframe receives a score of 0. These points are totaled and the average is reported on the right. The strongest uptrend would achieve a score of +4.00, while the strongest downtrend would achieve a score of -4.00.