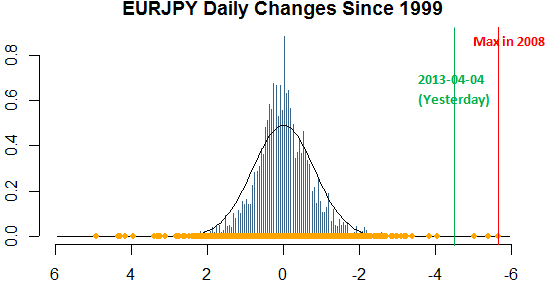 Article summary: Our Breakout2 and Momentum2 systems have had an outsized day of gains on the massive Japanese Yen sell-off. Here’s how we’re setting things up for the rest of the day and next week.

It has been a remarkable 36 hours in forex markets, and our sentiment-based trading strategies have seen one of their best runs of performance in recent memory.

We wrote yesterday that the systems initially got stopped out on the Bank of Japan interest rate decision, but here’s how we positioned ourselves for the massive turnaround—and to good effect.

As fun as it is to thump our chests with pride, we’ll look to how we position ourselves for the rest of the day and—more importantly—the week, month, and quarter ahead. First a look at where we stand: 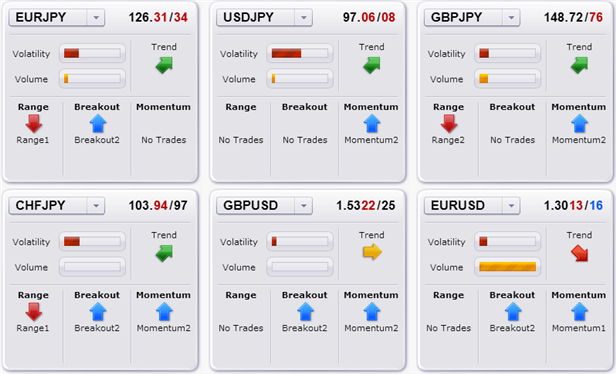 Our purely sentiment-based Momentum2 strategy did a great job switching directions in a hurry after initially getting stopped out on several JPY-long positions (USDJPY, EURJPY, GBPJPY shorts). And though the system has since been taken out of the EURJPY and EURUSD by its trailing stop, we specifically turned off automation on these pairs and manually trailed stops—in other words we stuck to the trades.

On Monday we wrote that we likewise liked Breakout2 trades on the EURUSD and EURJPY in particular, but we were perhaps unfortunate to stay out of other USD and JPY pairs as volatility was too low at the time. Trade filters are put in place to keep us out of extended drawdowns, but obviously we’re going to miss a number of trading opportunities and this is a great example. 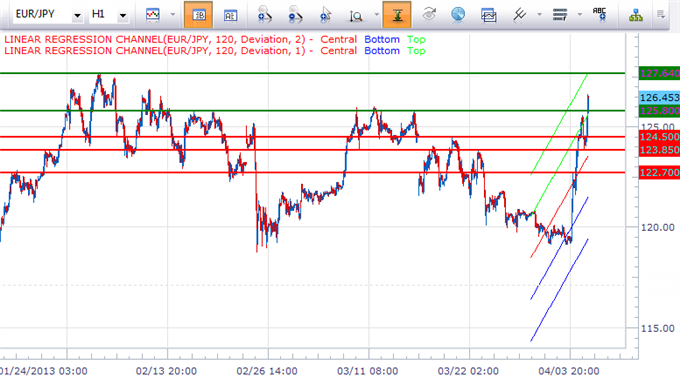 Euro/Japanese Yen: The pair has taken out critical monthly highs at ¥125.80, exposing a move towards multi-year peaks at 127.65. It’s tempting to leave the entire position on as further gains seem likely, but an old adage seems useful here: “Bulls [can] make money, bears [can] make money, pigs get slaughtered.” It seems prudent to take some profits here and trail stops further.

Former resistance becomes support, and we’ll exit the trade on a daily close below 125.80. Once we get taken out of the trade, we’ll likely wait the next Momentum2 and Breakout2 trades to the topside. 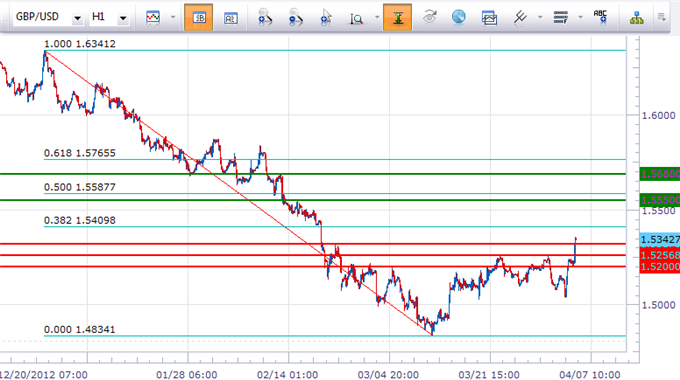 British Pound/US Dollar: A break above critical resistance at $1.5320 leaves next key resistance at the psychologically significant $1.54 mark, which is likewise the 38.2% Fibonacci retracement of the 1.6340-1.4830 move. It seems premature to take profits on this one but no one would blame you if you did. I’ll trail stops to a daily close below key congestion at $1.5260.

And as with the EURJPY, I’d likely look to the next long opportunity from Momentum2. I’m not completely sold on Breakout2 here until we see a bigger pick up in volatility. 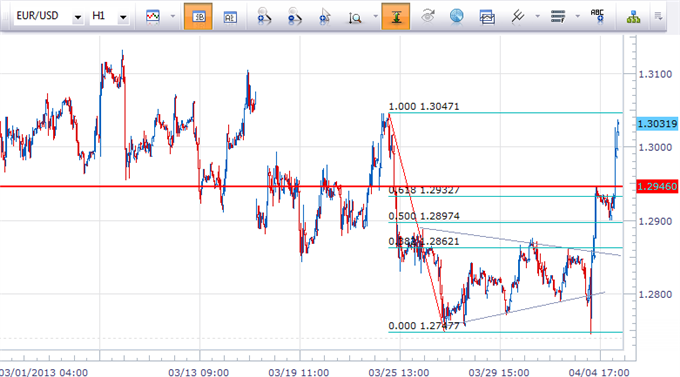 Euro/US Dollar: The EURUSD breakout has been nothing short of dramatic, which is obviously nice if you’re long. Of course it leaves relatively little in the way of critical support against which to place stops. Resistance is the pivotal high at $1.3050, while we’ll trail stop to a daily close below resistance-turned-support at $1.2950.

If stopped out we’ll most likely look to fresh Momentum2 longs in EURUSD and EURAUD (not shown).

Key Levels on the US Dollar/Japanese Yen Trade 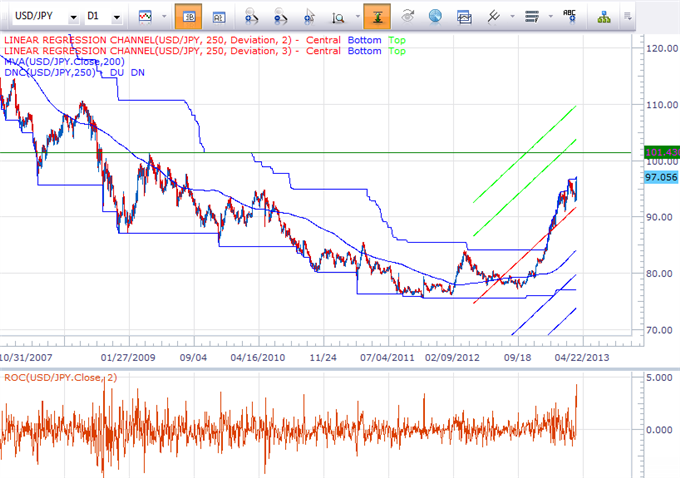 US Dollar/Japanese Yen: We have to zoom out to a Daily chart on the USDJPY to see next resistance. Obviously the psychologically significant ¥100 mark will be big, but the next major reaction high is the April, 2009 high at 101.43. Given the biggest 2-day Rate of Change (shown above) since 2008, there’s little in the way of firm support. We’ll close the position on a daily close below resistance-turned-support at ¥96.

If we’re stopped out, we’ll likely look to get into the next Momentum2 and Breakout2 trades to the topside.

Wrapping things up: It’s great when we have a trading plan that works in our favor, and our sentiment-based strategies are enjoying outperformance on these historic moves. Yet we can’t stress enough: PAST PERFORMANCE IS NOT INDICATIVE OF FUTURE RESULTS.

We like the Momentum2 and Breakout2 trades across the JPY and USD pairs. But the beauty of automating these systems on Trading Station Desktop is that we can manually turn automation on and off. We’ll manually trail stops on the existing JPY and USD shorts, while we’ll patiently wait for the next opportunity to sell into Greenback and Japanese Yen weakness.

The beginning of the week/month/quarter will often set the pace for the rest of the period. The weekly seasonality pattern didn’t do us any favors earlier in the week as we bought into JPY and USD gains, but the astounding reversal suggests it may be a good month and quarter for our sentiment-based trading strategies on key currency pairs.

View Previous Articles on Automating DailyFX and DailyFX PLUS Strategies

Find out how the Momentum2system trades on an article, webinar recording.

Trade with strong trends via our Momentum1 Trading System and view an archived webinar.

Why do most forex traders lose? How can we avoid common mistakes?