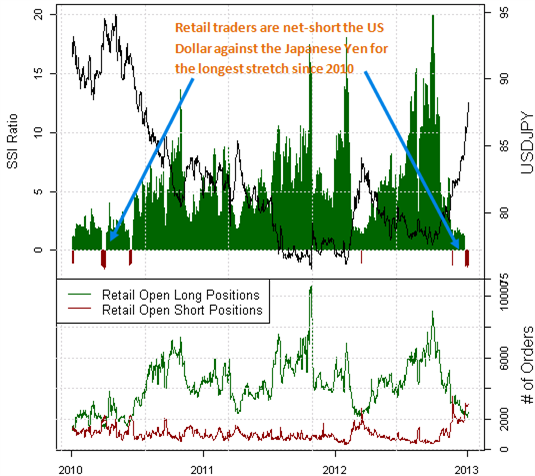 Forex Analysis: Japanese Yen Falls Sharply, but is Reversal Near?

The Japanese Yen continues to tumble against the US Dollar (ticker: USDOLLAR), but a key divergence against retail forex trader sentiment warns that an important turning point is near.

We use our retail trader-based Speculative Sentiment Index as a contrarian indicator to price action. If the majority of traders are long and continue buying, we typically look to go short and vice versa. We used this style of SSI analysis to help time the major USDJPY bottom in September.

Traders have most recently turned net-short USDJPY for only the third time since 2010, and indeed we’ve used it as further conviction in our calls for Yen weakness.

Yet we’ve most recently seen a key disconnect between retail traders and the USDJPY; the pair has hit fresh highs but total retail short positions have actually fallen. 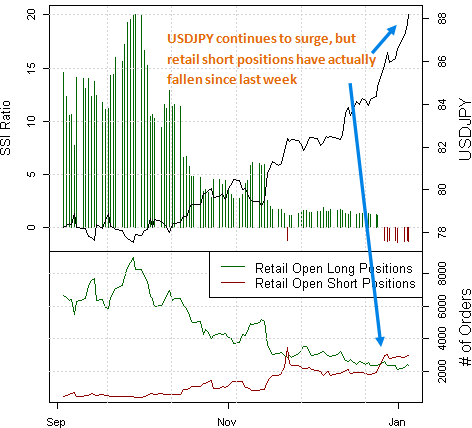 This has often happened at key points of exhaustion. Due to the fact that most small speculators tend to be mean-reversion traders, our SSI most often shows crowds sell strength and buy weakness. But when we see price rise and traders cut back on short positions, we often see price near an important reversal.

Combined with potential sentiment extremes seen through Forex Futures and Options markets, the risk of market turnaround is quite high. According to the CFTC Commitment of Traders report, large speculative futures traders are now their most net-short the Japanese Yen (long USDJPY) since the pair traded near key long-term peaks in 2007.

The potential for a sharp unwind of that positioning is quite high, and an aggressive exit of USDJPY-long positions would likely force short-term losses. 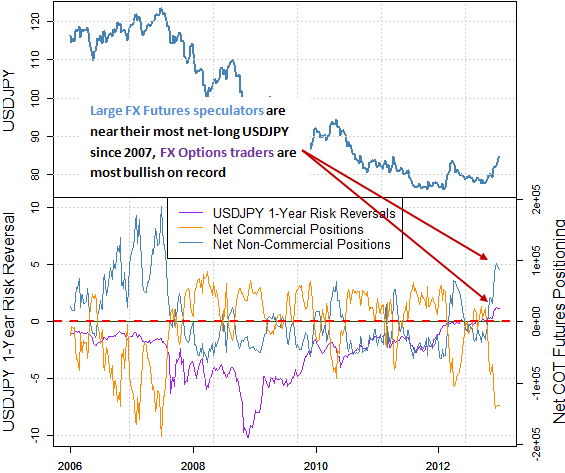 This doesn’t rule out further USDJPY strength through the year; a Japanese Yen short position is one of our top trade ideas of 2013. But it seems unwise to buy the USDJPY at current price levels. A look at the long-term weekly chart actually shows the USDJPY is at its most overbought level in 15 years. 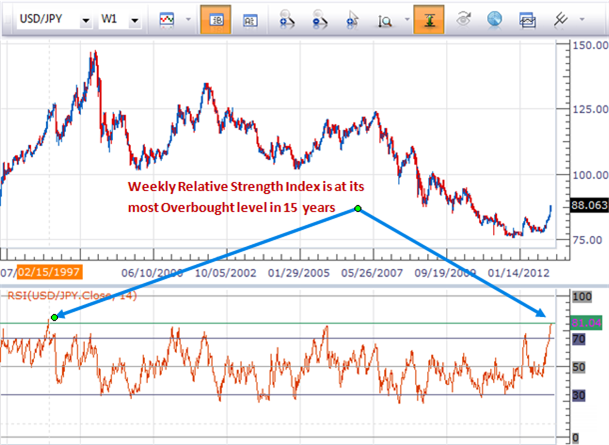 Where does this leave us? It’s always extremely difficult to catch a major top or bottom—especially given such a strong currency trend. Yet there is mounting evidence to suggest that the USDJPY may be near a significant top. Such signs should at least indicate that traders who are currently long should consider trailing their stop loss orders higher on the USDJPY.

Our Senior Technical Strategist has actually called for a short USDJPY position above 88, but placing max risk on such a position is difficult given the lack of major resistance until much higher.