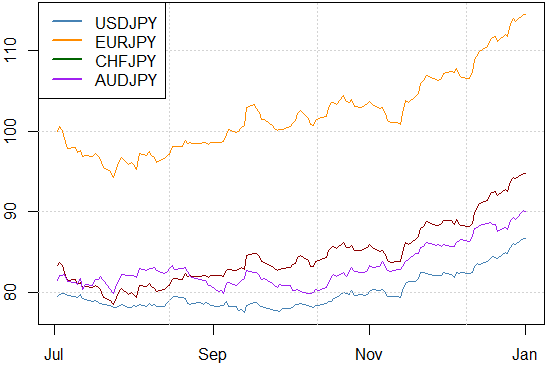 The Japanese Yen has been the worst-performing major currency in the past 4 months and its downtrend is clear. Is there further opportunity to go short the JPY in the New Year?

JPY Performance Since 9/10/2012 versus US Dollar, Euro, Swiss Franc, and Australian Dollar

Speculators have been fast to move on the sudden Japanese Yen downtrend, and CFTC Commitment of Traders data shows that large speculators are now their most net-short the JPY (long USDJPY) since 2007 when the pair traded near ¥115.

FX Options data shows that traders are at their most relatively bullish USDJPY since at least 2004; there now exists a premium for aggressive bets on/hedges against USDJPY strength for only the second time on record. 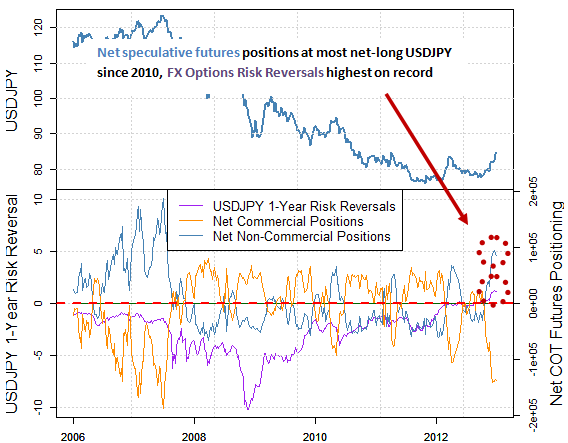 With such a clear swing in sentiment, we believe that the change in long-term trends remains clear and that it may continue higher. In fact, a Japanese Yen short position is one of our top trade ideas of 2013. If this is indeed a long-term turnaround in the JPY, how might we look to trade it and against which currency counterparts?

Selling the Japanese Yen – Against Which Currencies? 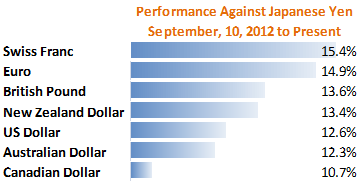 Based on relative performance alone, we see that the Canadian Dollar, Australian Dollar, and US Dollar are the cheapest versus the Japanese currency; the Swiss Franc, Euro, and British Pound are the most expensive. Does this imply that the CADJPY, AUDJPY, and USDJPY are the best opportunities to get short JPY? Not quite.

We have recently argued that the Australian Dollar may see further declines and the Canadian Dollar may continue to trade in a wide range against the US Dollar. Our relatively bullish US Dollar forecast thus argues that the USDJPY may present the most attractive opportunity to get short the JPY. Yet it is critical to note that the USDJPY is coming up on key technical resistance, and corrections are quite possible. How might we time a fresh Japanese Yen short position?

US Dollar Approaches 61.8% Retracement of Multi-Year Decline Versus Japanese Yen 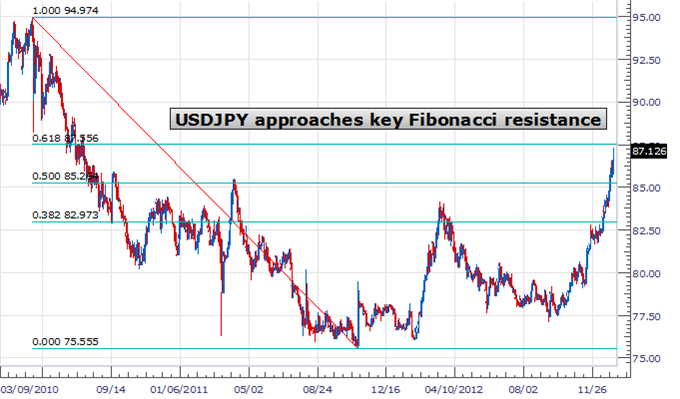 Given the clear risk of retracement and the increased focus on Japanese Yen’s sharp declines, we may be near a significant top—making fresh long positions unattractive. But where might we buy?

If we look at key technical levels, we see that there are three levels of potentially significant support markers within distance of current price. The first and arguably most significant is the USDJPY high from 2011 is 85.50, previous 2012 peaks at 84.15, key congestion levels near 82.80, and the pair’s 200-day Simple Moving Average at almost exactly the 80.00 mark. 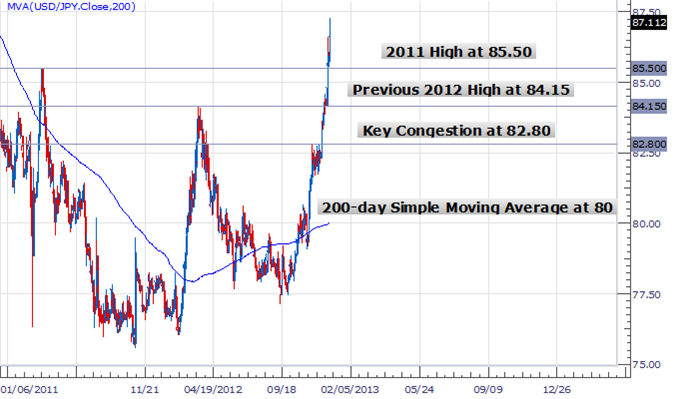 A test and hold of key support may provide better opportunity to get long the USDJPY. Though it is difficult to know ahead of time exactly what this might look like—markets themselves will dictate what is an important turning point in price—we would feel more comfortable waiting for confirmation before getting long.

Our proprietary Speculative Sentiment Index data may provide further insight on the Japanese Yen’s next moves. It was in September that we claimed a significant retail sentiment extreme likely pointed to a major USDJPY bottom. More recently we have written that a substantial shift in positioning warns of further gains. Indeed, retail trading crowds are now net-short the USDJPY for the longest stretch since 2010. 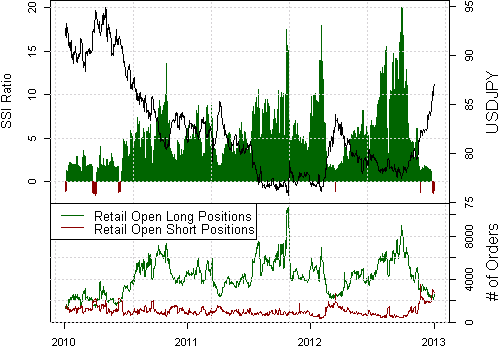 Going forward we may continue to watch retail positioning to time the next attractive opportunity to buy the USDJPY. In the meantime, however, we see considerable risks of short-term declines.