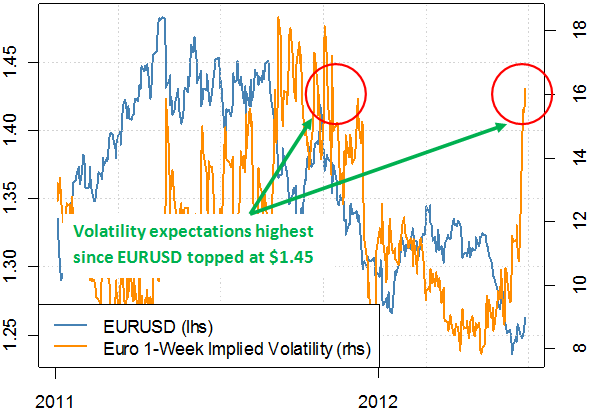 Forex Traders Positioned for the Worst on Greek Elections - Caution

Upcoming Greek elections could force substantial volatility in the Euro and other major currency pairs, and a broad range of market indicators show that conditions show fears for the worst. DailyFX Currency Analyst Christopher Vecchio lays out the stakes and fundamental reasons for why Greek elections could materially change outlook for the Euro. Trader positioning likewise shows fear for the worst—how exactly?

Forex options markets show that 1-week volatility expectations are at their highest since the Euro/US Dollar topped near the $1.45 mark in October, 2011. According to Bloomberg’s options data, traders are pricing in as much as a 200-pip daily range for the Euro every day through next week. The last time the Euro set a 200-point Average True Range (ATR) over 5 days occurred as it set a short-term top at $1.38 (on 11/14/2011) and subsequently fell a substantial 370 pips from its peak in that same week.

Traders should remain extremely cautious and limit positions and especially leverage ahead of the weekend. The inability to close/open positions as election results are announced creates significant risk of outsized losses. When markets open, we likewise expect markets will be extremely volatile and difficult to trade.

Why do traders fear the worst? Quite simply, a far-left party victory could effectively push the government of Greece into default as party leaders have made it clear they intend to issue a moratorium on debt repayments and renege on bailout agreements.

No regional government has defaulted on its debt in the Euro’s 13-year history, and most expect that a Greek default would force it out of the Euro Zone. The size of the Hellenic Republic’s economy suggests that it should have relatively little impact on the broader region. Yet the most significant risk is that a Greek default forces substantial strains in at-risk in the EMU’s third and fourth-largest economies in Spain and Italy.

We can gauge overall fear of Greek default by the yields investors require for long-dated bonds; high yields show strong expected risk of default. An extremely negative correlation between Greek Government 10-Year Bond Yields and the Euro/US Dollar emphasizes the importance of the weekend’s elections. If Greek 10-Year bonds surge as traders prepare for default, correlations suggest the Euro/US Dollar could fall even further. 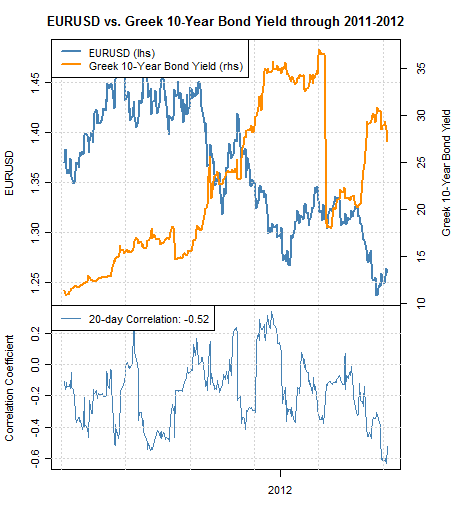 Given such clear risks to the Euro’s very existence, traders are quite clearly positioned for further declines. As of last week, large speculative futures traders were the most net-short Euro/US Dollar in history, while commercial hedgers were likewise at their most defensively net-long on record by a very large margin. Finally, FX Options traders are paying extremely largest premiums for aggressively bearish 1-Year EURUSD Options—underlining fears of substantial Euro weakness and ‘tail risk’. 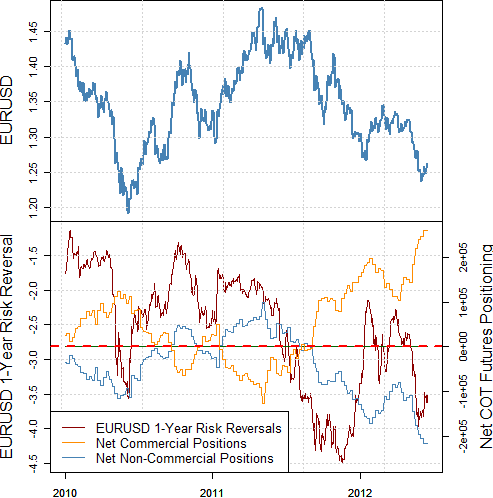 The writing on the wall tell us that the Euro could fall substantially on sharply negative disappointments, and trader positioning likewise shows that many are betting on or hedging aggressively against EURUSD weakness. Yet there is absolutely no guarantee that Greek elections will produce such negative outcomes. Volatility expectations themselves predict that price moves could be substantial in either direction.

In fact, such one-sided bearish sentiment and leveraged bets warn that a positive surprise could force a significant Euro recovery. Traders should remain extremely cautious ahead of the weekend, limit leverage, and trade defensively following Sunday’s market open.