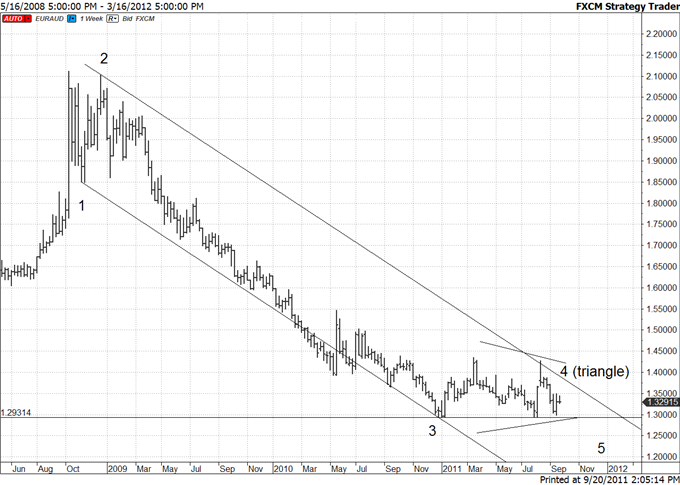 A collaborative effort between Jamie Saettele and Michael Boutros, Scalping the Waves aims to identify trading setups within the waves that are most conducive to superior trades (higher volatility, higher reward/risk…the Elliott wave model tells us that we want to stay away from most corrective behavior for example). The report will be published as market action dictates.

The sideways pattern from the January low is probably a 4th wave triangle within the 5 wave decline from the 2008 high. The end of triangles make for decent trading as volatility tends to pick up. 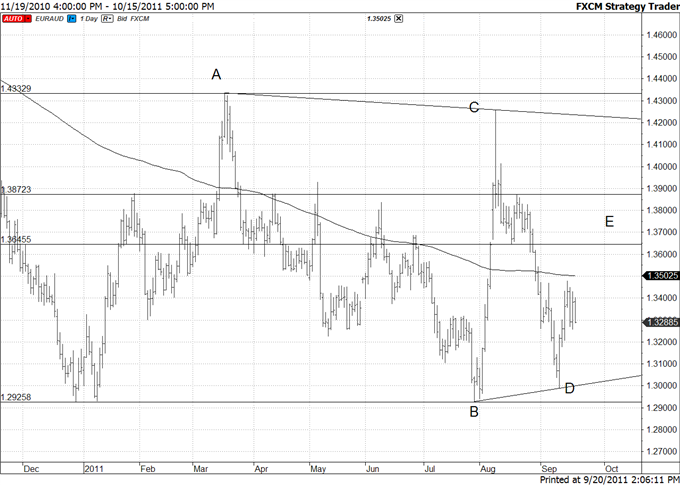 Triangles usually consist of 5 corrective waves labeled A-B-C-D-E. The final wave of the triangle (wave E) is often sharp. In this case (a bearish triangle), a rally is expected for wave E into the previous congestion of 13646-13872. 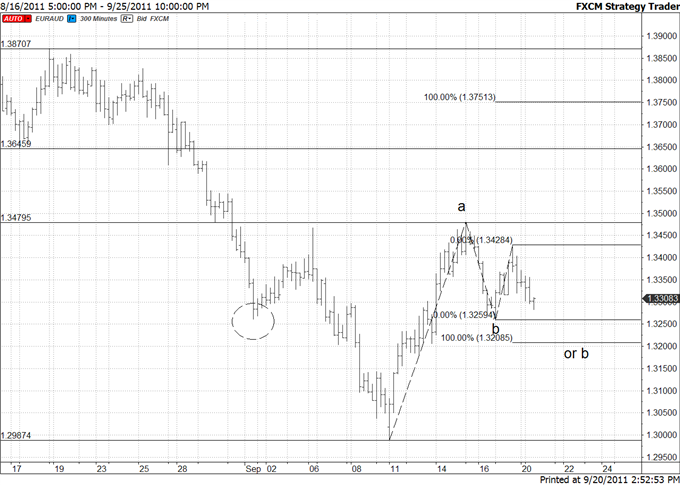 Where is the EURAUD within the construction of wave E? The answer is never definite which often leaves much to be desired. Either wave b of E is complete at 13259 or wave b of E will continue slightly lower and find a low closer to 13200 (100% extension at 13209). The specter of a head and shoulders pattern (left shoulder circled) favors the former interpretation which implies a move into previously mentioned congestion with price remaining above 13259. 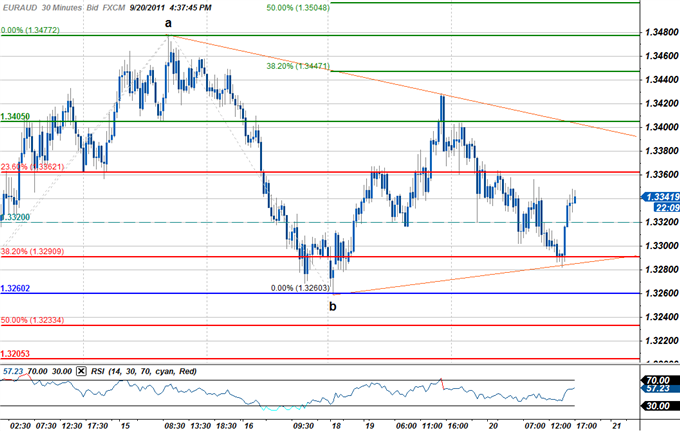 A 1hour ATR yields profit targets of 23-28pips depending on entry, with our bias weighted to the topside so long as price action holds above the 1.3260 threshold. A closer look at the formation suggests a break above the 23.6% Fibonacci retracement taken from the September 11th advance at 1.3360 sees scope for a test of trendline resistance, currently just shy of the 1.34-handle. A breach here waits on a confirmed break above the 1.3405 to initiate longs with topside profit targets eyed at the 38.2% Fibonacci extension taken from the September 11th and 18th troughs at 1.3445, 1.3475, and the 50% extension at the 1.35-figure.

A break below the convergence of the 38.2% Fib retracement and trendline support eyes crucial support at the b wave low at 1.3260. A break below this level invalidates the wave count, with downside targets eyed at the 50% retracement at 1.3235, 1.3205, and the 61.8% retracement at 1.31775. Such a scenario will prompt the completion of wave b before taking the pair higher. Once a bottom is in place, all scalp levels will remain in play to the topside.

Send requests to receive Jamie’s reports via email to jsaettele@dailyfx.com or follow him on Twitter at JamieSaettele

Send requests to receive Michael’s reports via email to mboutros@dailyfx.com or follow him on Twitter at MBForex