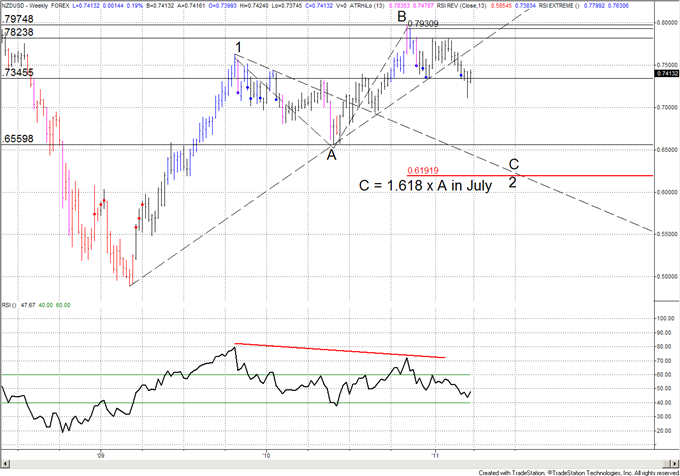 Do not dismiss the bearish implications from the AUDUSD / NZDUSD divergence that was detailed early in the year. From an Elliott perspective, I maintain that the NZDUSD completed wave B of a flat in late 2010 (those unfamiliar with Elliott wave click here). The drop under 7342 reinforces the bearish bias. The wave count is getting exciting as the drop from 7975 is unfolding in a series of 1st and 2nd waves (see short term chart below for details). Looking out, an objective is defined by the 161.8% extension of wave A at 6192. This level intersects with a former trendline in late June (week of June 24th). Equality in time between waves A and C reinforces early summer as a point in time to expect a NZDUSD bottom. Wave A consumed 31 weeks and 31 weeks from wave C suggests a low during the week of June 10th. 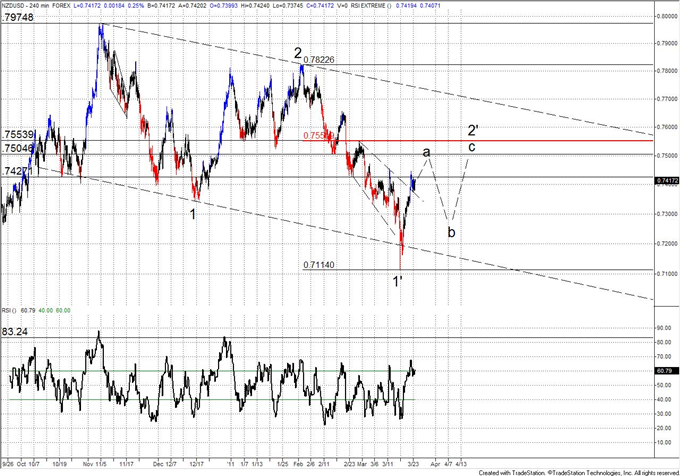 I mentioned that the wave count is getting excited and it’s not just because a 3rd of a 3rd decline is expected to begin in April or May. Second waves are also sharp and worthy of trading consideration. A close look at the structure of the advance from 7114 reveals that the rally is unfolding as an impulse (5 waves). The advance will be complete following a push above 7446 (complete wave a of 2’). Resistance comes in at 7475/7505. The former is a recent pivot high and the latter is where wave v would equal wave i of the same degree (wave a) and former support. A b wave decline would then be expected for the remainder of March and into April. An estimated support zone is 7360-7260 for the b wave low. Yet another strong rally in wave c would then be expected to complete wave 2’ of 3; probably near 7550 (61.8% retracement and wave 2 of 5 with then decline from 7823 – this is a common area for retracements to end following extended 5th waves). My best estimate as to the path of the NZDUSD over the next month is displayed on the chart. Markets are dynamic and just as there are varying degrees of trend, there are also varying states of market predictability. The main requirement for higher pattern predictability is higher volatility, which permits a clear view of wave structure. Do understand that there is never a time in which market predictability is 100% or even close to perfection. Rather, it is a relative phenomenon and wave practitioners should have a better idea of what will happen now as opposed to before (which was a lower volatility environment). I’ll be publishing updates to the NZDUSD pattern (and other patterns of course) in real time through the DailyFX Forex Stream. 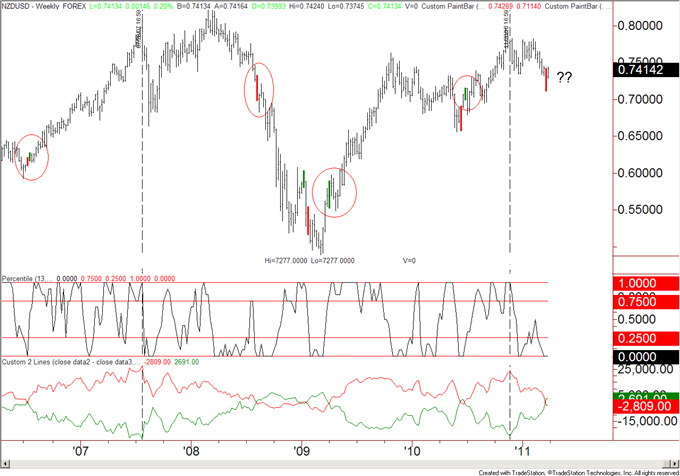 I’m often asked about my fundamental outlook. I do indeed possess a fundamental outlook but it differs from what most believe is fundamental to market action. I’ve debunked the idea that economic indicators affect exchange rates for any extended period of time. I do believe that economic releases result in short term spikes that are probably more a result of lack of liquidity than anything else and that those spikes often offer a valuable price to enter a market. For example, NZ GDP will be released today and the specter of a 5 wave rally nearing completion warrants a bearish stance in the event of a spike following the release. I believe that psychology is fundamental to price behavior. There are multiple ways to measure market psychology and the Commitments of Traders report released by the CFTC is one of the most useful. Large speculators (red line) are usually most ‘long’ at the very top and most ‘short’ at the very bottom. As trend followers, this makes sense. What is often overlooked is that they are correct for most of the time. In other words, once they flip from net long to net short, the probability that a new trend is underway is increased. The green bars on the chart indicate when speculators flipped to net long and the red bars indicate when speculators flipped to net short. There are several instances of course in which a choppy market results in the speculators getting whipsawed and flipping several times before catching the trend-nothing is foolproof. Still, I find it worthy of mention that speculators are now net short the New Zealand dollar.