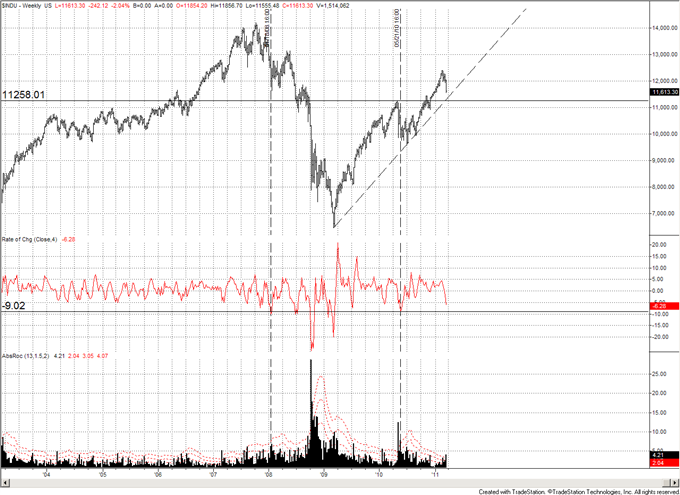 It’s that time of year again and I’m not referring to the NCAA basketball tournament. Rather, I am referring to the sudden realization by the masses (markets) that risk does indeed exist. It has taken less than a month for the Dow to wipe out nearly 2 months of gains. Most of the decline has taken place in the last 5 days. High yielding (relatively) currencies such as the Australian and New Zealand dollars have declined the most since last summer. Markets oscillate at varying degrees of trend between optimism and pessimism and the most recent swing is towards the latter. So where do we go from here? Charts can give us an idea.

Although it consists of just 30 stocks, the DJIA remains a popular and I believe accurate gauge of the current risk situation. The turn lower caught many market observers off guard. Of course, a one sided market is a prerequisite for an impressive reversal. On that note, how do we know if this decline is just a blip in the slow back and fill uptrend or the beginning of a multi month (and maybe longer) decline. From an Elliott wave perspective, a 5 wave decline from the top is required in order to confirm that the larger trend has turned down. So far, there are just 3 waves but the third wave is now 161.8% of the first wave. This is common for impulses (impulse means 5 waves). Watch 4 week rate of change as well (see above chart). Currently, 4 week rate of change is at -6.28% (as of Wednesday’s close). A drop below the -9% level would strongly suggest that 12391.30 (the high) won’t be seen again for a long time. This is the level that ‘announced’ the beginning of the 2008-2009 bear market and also provided support following last year’s flash crash. The trendline that extends off of the 2009 and July 2010 lows is at about 11300 this week which is close to the April 2010 high of 11258. This area is probably support if reached. What’s more, a drop of 3% more this week would place the Dow at 11274, right in the middle of the 11258-11300 estimated support. 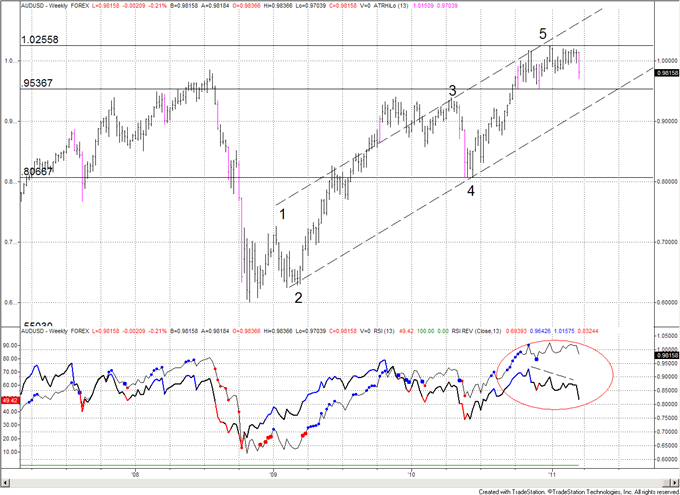 The AUDUSD has dropped below its January low. This is significant because January had composed the entire range of 2011 thus far. The break sets the stage for the rest of the year (which is lower). Clearly, there is a lot of air under prices. The next level is the December low at 9637 followed by the support line. The rally from the 2008 low is in 5 waves and the former 4th wave extreme is often support. This level is 8067. It is difficult to estimate how long it will take for the AUDUSD to reach this level but know that declines consume far less time than rallies. Short term resistance is from 9850 to 9970 and price should remain below 10160 on its way to much lower levels in the weeks and months ahead.