OVERVIEW – The Economist has just released its annual Big Mac Index with the results showing that the NOK is some 90% overvalued which suggests that the currency could be poised for a major correction. The basic premise behind the index is that a Big Mac should be of equal value all around the world and the results show that a Big Mac is almost double the cost in Norway as it is in the US.

Moving on, the markets have now had the benefit of the weekend to absorb and digest the latest European stress test results and it will be interesting to see what type of price action and direction things take in Monday trade. The general consensus and feedback in the two weeks leading up to the stress test results was quite positive, so it wasn’t much of a surprise to see the results come out on the upbeat side. However, the major concern heading into the tests and now after the tests is that the tests were way too lax and have helped very little, if at all, to instill a higher degree of confidence in the European banking system. This will most probably dictate direction in the regional currencies with very little in the way of economic releases. Swedish trade balance is the only key release, due at 7:30GMT.

Eur/Sek Despite the latest pullback, we still see the market attempting to carve out some form of a base at current levels and we look for the price to hold above 9.40 on a close basis ahead of the next major upside extension beyond 9.60 over the coming sessions. Only a close back below 9.40 would negate and give reason for concern.

Eur/Nok The market continues to adhere to a rising bull channel since early June after being well supported ahead of 7.90 in recent trade, and we now look for some continued strength back towards 8.30 over the coming sessions.

Usd/Sek Despite the latest pullback, we retain a constructive outlook for the pair with the market overextended and in need of a healthy corrective bounce at a minimum. A major head & shoulders pattern objective has been reached by former resistance turned support and we look for any additional declines to be well supported ahead of 9.25 on a close basis in favor of the next major upside back towards initial resistance by 7.60 over the coming days. 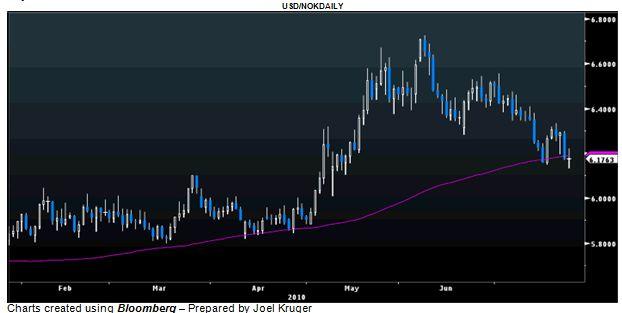 Usd/Nok Friday’s close below the 100-Day SMA which has supported much of the up-trend over the past several months is somewhat concerning, although we will retain out constructive outlook provided the market can close back above the 100-Day SMA on Monday. In the interim, we recommend taking to the sidelines and waiting to see how things play out in Monday trade.

Gbp/Nok Has been in an impressive bull channel since mid-March, with the market rallying to the 9.80 area ahead of the latest minor pullback below 9.50. However, the market has once again adhered to the bull channel after bouncing back above 9.50 and we look for fresh upside beyond 9.80 over the coming sessions.

Nok/Jpy Market confined to a 13.50-14.50 range since May, with the price currently locked somewhere in the middle of this range. Ultimately, the overriding trend still remains quite bearish, so any rallies towards 14.50 should be sold.

If you wish to receive Joel's reports in a more timely fashion, e-mail jskruger@fxcm.comand you will be added to the "distribution" list.