2010-05-05 05:26:00
Joel Kruger, Technical Strategist
Share:
OVERVIEW – The focus in the region today is all on Norway, with some volatility to be expected as the markets set to digest the unemployment data and subsequent interest rate decision. Although economic data in Norway has been healthy and relatively strong in the face of a struggling global economy, the Norges Bank is still in an uncomfortable position, having to adjust its monetary policy and adapt to developments in the global economy.  The Norges Bank was the first major central bank to reverse monetary policy, but may have to adopt a more balanced approach going forward, with the risks to further widespread deterioration and a local currency which has appreciated more than many central bankers would like, needing to be taken into consideration. While the Norges Bank is expected to raise rates by a quarter of a point to 2.00% today, the result may not fuel additional NOK appreciation, and could even have a net NOK negative result much like we had seen with the Australian Dollar earlier this week when the RBA hiked rates but also signaled that they would probably be looking to pause. Stay tuned…

Eur/Sek Once again attempting to carve out a base after stalling out by fresh 2010 lows at 9.55 in the previous week. However, the overall trend remains grossly bearish, and a break back above 9.80 will be required at a minimum to force a shift in the structure and open additional corrective upside. Next key support comes in by 9.50.
Eur/Nok The market is threatening a bearish continuation, with the latest break below 7.90 helping to confirm and negate any hopes for the formation of a material base. Next support comes in by 7.80, with a break below to accelerate further, while back above 8.00 is now required to take the pressure off of the downside and keep recovery hopes intact. 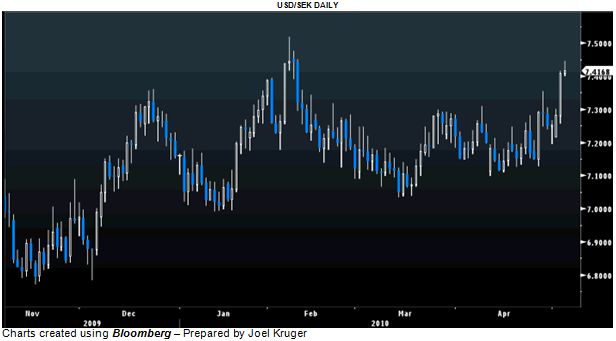 Usd/Sek Our view is highly constructive at current levels and favors continued USD appreciation over the coming weeks.  We contend the market is attempting to carve out a major base rather than in the process of some bearish consolidation. Any setbacks are expected to be well supported by 7.00, with a higher low sought out ahead of the next major upside extension  towards 7.50-75 over the medium-term.
Usd/Nok The overall structure remains grossly constructive and a fresh medium-term higher low is sought out by 5.80 to be confirmed on an eventual break back above the current yearly highs at 6.10, which will expose 6.30-50 further up. Only a weekly close back below 5.80 would give reason for pause.
Gbp/Nok Our outlook remains constructive since the cross formed an inverse h&s base back in March and we look for any setbacks to now be well supported in the 9.00 area which acts as previous neckline resistance now turned support. Fresh upside is seen back towards 9.20-30 over the coming days.
Nok/Jpy Has been well confined to a very choppy range trade over the past several weeks, largely defined between 15.00 and 16.50. Setbacks have once again been well propped in the 15.00 area ahead of the latest bounce back into the mid-range, and we continue to recommend playing the range high-lows.