- Continued rise in US yields necessary for further Dollar strength.

There’s been very little follow through in the wake of the Federal Reserve’s decision to taper QE3 to $75B/month, through a combined $10 of cuts in equal reductions in Treasury and MBS purchases. The US Dollar undeniably benefited from the move – hitting fresh yearly highs against the Australian Dollar and the Japanese Yen – but sticky Treasury yields have prevent much further progress.

US yields, while initially jumping higher yesterday, are only marginally changed over the past day and past week in the “belly” of the yield curvey (3Y to 7Y notes), which saw the most significant jump in rates during the height of premature taper speculation, from May through September. This is a sign that the market is tentatively ‘buying’ into the Fed’s forward guidance, that “tapering isn’t tightening.”

Directly impacting Treasuries, the nature of the Fed’s taper decision was dovish. The $10B reduction in QE3, were one to assume that no further reductions would be made, would only result in $120B fewer purchases in 2014; the Fed’s balance sheet will be approximately $3.9 trillion instead of $4.0 trillion.

The change in asset purchases may only be a drop in the bucket compared to the more important change: the Fed adjusted the goal posts for raising rates. While QE3 will be withrawn in “measured steps,” by changing the language around the 6.5% Unemployment Rate threshold to underscore the importance of the Fed’s medium-term +2% inflation target. To be clear: as it stands, the Fed will not raise rates upon the first Unemployment Rate print at or below 6.5%.

Nevertheless, the US Dollar has retained most of its gains despite some shallow downside overnight. Of course, if investors feel that this small, more-or-less symbolic taper isn’t a reason to reduce bullishness towards risky assets, Treasury yields could pullback further and represent a major obstacle for the buck. Today, we see that consolidation in the USDOLLAR occurring after yesterday’s breakout, which we were prepared for per last Friday’s article: 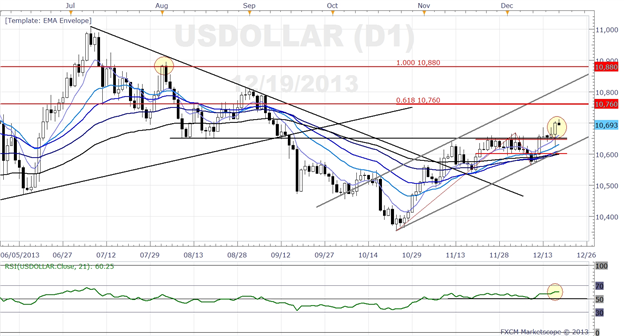 - The USDOLLAR hit fresh December highs above 10700, validating the consecutive high closes above 10646; no closes in November exceeded this level then price did not close below it the past several days.

- Will look for daily RSI (21) to remain above 50 during uptrend; recent bounce at 50 coincided with base forming at moving average cluster (now TL support off of October 25 and December 10 lows, parallel drawn to November 12 high).

- Channel support comes in from 10610/50 over the coming days; a break below this zone invalidates bullish aspirations. 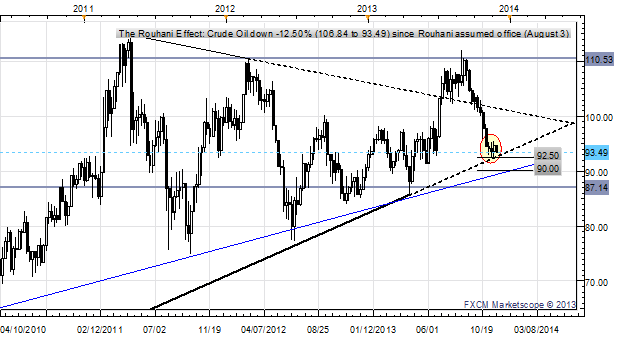