- US yields, especially on long-end, soared yesterday after a December QE3 taper was made possible.

- Relatively light calendar in US today keeps focus on FOMC.

The US Dollar surged yesterday and has retained its gains overnight after the Federal Reserve’s October meeting Minutes suggested that an improving economy could warrant a taper of QE3 over the coming months. Considering that the October policy meeting took place before the October NFP figures were made available – they were pushed back a week thanks to the government shutdown – it’s possible that early hope for further improvement in data may already be transpiring.

Accordingly, as the Fed struggles to differentiate “tapering” from “tightening” – a way to show that they intend to keep rates low even after bond buying ends – market participants have taken the news as the most recent sign that a relatively more hawkish stance in monetary policy should be expected.

A steepening yield curve in the fashion it is occurring is often indicative of confidence in the economy. As such, the US Dollar has leapt higher against the two groups that are highly sensitive to QE3 taper talk and higher US yields: the commodity currencies and the safe havens. Of interest today is the USDJPY which is attempting to confirm a major topside breakout: 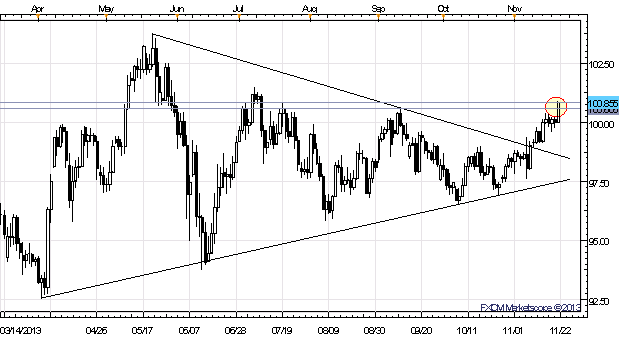 - The USDJPY remains supported by an uptrend dating back to November 2012, and a more concerted uptrend since April 2013.

- Price broke out of the symmetrical triangle (dating back to May) in early-November, but faces its first major former swing level today at ¥100.60/86.

- Profit taking may occur (longs trapped since September, last time price traded this high), but the trend remains higher until 99.00 is closed below on a weekly basis.