- Asia and Europe react to softer US yields at close on Friday, send Dollar lower.

The US Dollar continues to edge lower in the days after Federal Reserve Chairwoman nominee Janet Yellen’s Senate testimony on Thursday, as the soon-to-be most powerful woman in the world made clear her intentions to keep monetary policy as loose as possible in the near-term.

In an environment quickly morphing back to one indicative of market participants reducing their expectations for a QE3 taper – the US yield curve has flattened, particularly in the 3Y-10Y maturity range, which steepened the most during the height of QE3 taper speculation from late-May to early-September – the US Dollar not only stands to suffer, but ‘risk’ in general is happily picking up the pieces.

While the commodity currencies, led by the New Zealand Dollar, have posted impressive gains the past several days, with the NZDUSD up over +2.50% from last week’s low set on Tuesday, perhaps more interesting right now is the battle being waged in the EURUSD. While the EURUSD had only gained +0.10% at the time of writing, it was in the midst of an important battle around $1.3500: 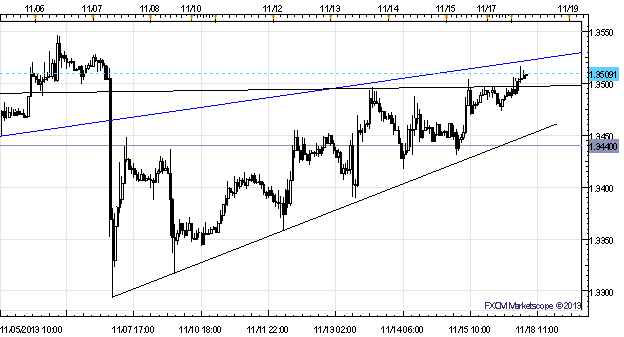 - The EURUSD is comfortably above former key support, 1.3440.

- Former resistance, turned support, now resistance has broken, the TL off of the June and August highs.

- While these signs point to a more bullish EURUSD, until the ascending TL from the July and September lows is reclaimed (blue line on chart above).

- Retail trader sentiment points to a break higher in EURUSD over the coming days.