EUR/USD Gives Back All Gains after Euro-Zone GDP, Ahead of Yellen

A week absent of significant event risk may see the most important event come to pass today, and already market participants have shifted their attention. Ahead of the Senate confirmation hearings for the Federal Reserve’s Janet Yellen, the prearranged comments were released ahead of time, sending the US Dollar lower and US yields lower amid a perceived dovish tone.

Nevertheless, if the comments released are the most dovish as Ms. Yellen intends to get today – she being considered more dovish than other policymakers – then any damage levied against USD-denominated assets may have run its course.

Focus will remain on the nature of this comment from Ms. Yellen’s statement: “A strong recovery will ultimately enable the Fed to reduce its monetary accommodation and reliance on unconventional policy tools such as asset purchases. I believe that supporting the recovery today is the surest path to returning to a more normal approach to monetary policy.”

There are two takeaways here: first, that Ms. Yellen might not think the economy is strong enough to taper QE3 at present; and second, that Ms. Yellen finds fiscal policy restrictive, which has necessitated the Fed’s ultra-easy stance. Yet these comments aren’t that dovish; they are more or less facts about the US economy. The Fed’s forward guidance remains in place as the thresholds haven’t been hit (+2.5% y/y CPI, 6.5% Unemployment Rate), and the federal deficit is falling at its fastest pace in the post-WWII era.

If Ms. Yellen has no ace up her sleeve, the Q&A portion of the testimony could help draw out expectations for a QE3 taper timeline. Accordingly, in light of the initial reaction (weak USD, weak US yields), a ‘buy the rumor, sell the news’ situation may be evolving.

With Euro-Zone GDP (3Q A) disappointing, the economic fears laid out last week as signaled by the ECB’s rate cut were vindicated, leading to a marginally weaker Euro in the wake of the release. Accordingly, if the ‘sell the news’ situation emerges, then the EURUSD is primed to slip intraday on a rebound in the buck and stronger US Treasury yields. 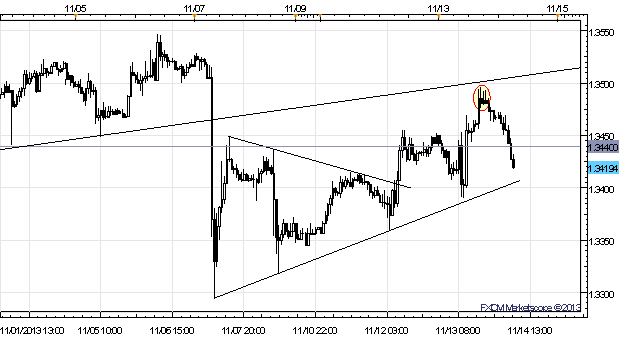 - The EURUSD initially broke out of its post-ECB/post-NFP Symmetrical Triangle consolidation to the upside on Tuesday.

- Price restested the underside of the ascending TL from the July and September lows at 1.3495/3510 and failed (four consecutive Inverted Hammers on H1).

- Price has fallen through pre-Yellen comments (1.3454) and trades closer to yesterday’s lows than the highs.

- Break below 1.3400 today could signal beginning of further weakness.