US GDP Taps Taper Fears – How Will October NFPs Impact the US Dollar?

The US Dollar had a rocky day yesterday, swinging from sharp gains to sharp losses across the board in only the matter of a few hours. Ultimately, what was shaping up to be the best day against the Euro since December 2011 turned out rather dull for the US Dollar, finishing essentially flat on the day.

I believe that the violent swings in sentiment yesterday can be traced back directly to the strong US GDP for the 3Q’13. At +2.8% annualized growth versus +2.0% expected, the economy grew by a clip 40% above what economists were expecting; and the data helps dismiss lingering beliefs of a summer slowdown or pre-government shutdown shift in economic activity.

Yesterday, that didn’t leave US markets in a good position. Until the past week, US data had progressively eroded, culminating in September NFPs missing estimates and US consumer sentiment in October plunging by the most since August 2011 – when the US lost its hallowed ‘AAA’ credit rating. Accordingly, seeing strong headline growth data that infers that the Federal Reserve could initially taper QE3 in December rather than January or March spooked investors.

The 1-day-, 1-week, and 1-month nominal change (bps) in US yields at various maturities exhbits the impact of the government shutdown on investor sentiment. Uncertainty over US fiscal and monetary policy has pushed investors into safety on a medium-term time horizon (2Y-7Y) over the past several days,weighing on the US Dollar.

The worst case scenario for US equities and the US Dollar would be if the Fed were to taper QE3 amid a weak economic backdrop. We saw a preview of this yesterday, when the shift into the traditional safe haven – US Treasuries – saw equities and the Dollar lower. However, if today’s release of the October NFP reading comes in better than expected, there is reason to believe that the buck could turn right around.

The outcomes I believe are disproportionate: a weak NFP figure has a scapegoat, which could limit the US Dollar to a more modest selloff on the headline; but a strong NFP figure would suggest that the economy is even more resilient than most realize. In the second outcome, because it would also point to a stronger economy, the US Dollar would have more room to gain if US yields turn higher (typical on improving economic data). 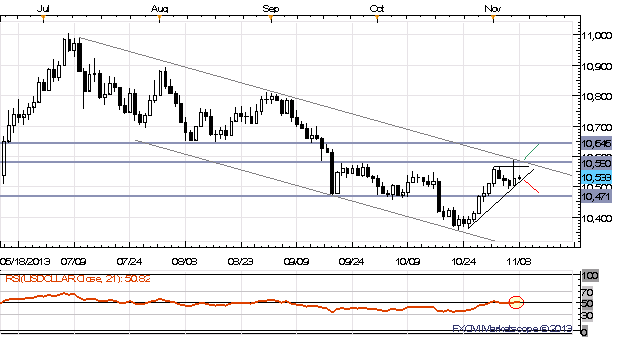 The Dow Jones FXCM Dollar Index (Ticker: USDOLLAR) is attempting to base and reverse out of its downtrend from the July highs, but yesterday’s first breakout attempt was a failure. An Inverted Hammer formed on the daily chart (a bearish reversal candle) after failing near 10580/90, downtrend resistance and late-September swing highs. However, price remains supported by the short-term counter-uptrend off of the October and November swing lows.

Accordingly, the USDOLLAR will be important to monitor in the wake of the NFP report. A strong report >+140K (estimate +120K) could see 10580/90 tested once more, which if broken, would suggest gains into the June swing lows at 10640/50. Daily RSI (21) is holding above 50, suggesting that momentum is turning bullish.

A weak NFP result could see a short-term pullback, though 10500 would need to be obtained to declare to short-term rally the past two weeks finished. In such an event, if the bull case were still to prevail, 10470/80 would need to hold as support. Failure would restart the bearish USDOLLAR case, suggesting another drop towards the October lows near 10350/60. 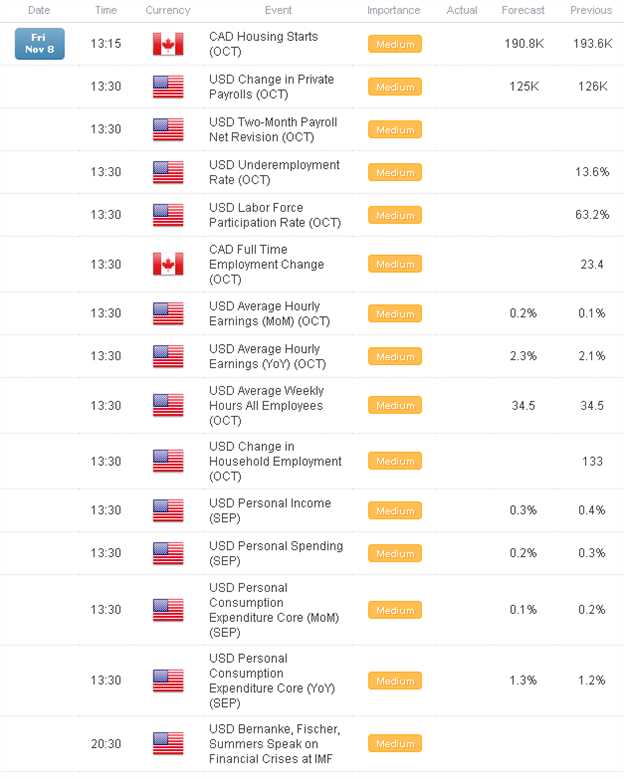