Dip versus EUR, GBP May Be Chance to Buy as USD Retreats After Breakout

The US Dollar has opened the week lower on the back of slightly softer US Treasury yields, although incoming economic data from abroad overnight has the other major currencies appreciating in their own right. Notably, the Chinese PMI Services (OCT) report showed that non-manufacturing activity was growing at its fastest pace since August 2012, helping offset some of the recent concerns over tight Chinese liquidity conditions.

Thus, conditions early in the week have been favorable to the higher yielding currencies and unfavorable for the lower yielding ones, with the Australian and New Zealand Dollars leading and the Japanese Yen, Swiss Franc, and US Dollar lagging across the board. Improved October PMI data out of the Euro-Zone and the United Kingdom proved moderately beneficial for the Euro and the Sterling likewise.

With very modest rallies developing among the majors against the US Dollar, is likely that there is an increase in volatility this week thanks to a super-saturated economic calendar. In fact, there are three central bank meetings (the RBA on Tuesday, the BoE and the ECB on Thursday) and four labor market reports (New Zealand on Tuesday, Australia on Wednesday, Canada and the United States on Friday).

The end of the week will be more important than the beginning, with the ECB meeting on Thursday and the October US NFP report on Friday. These events could prove pivotal for two developing themes: widespread Euro weakness amid the potential for a rate cut; and a broader US Dollar reversal after dithering since the Fed’s September 18 FOMC meeting.

Continued high levels of global central bank stimulus – the continuation of the Fed’s QE3, the ECB potentially shifting more dovish this week after the horrible inflation data last week – are showing signs of emerging which would naturally favor higher yielding currencies like the Australian and New Zealand Dollars (as we’ve seen today). But if US yields stay elevated through the end of the week after NFPs, weakness through November might be most clearly articulated by the European currencies. 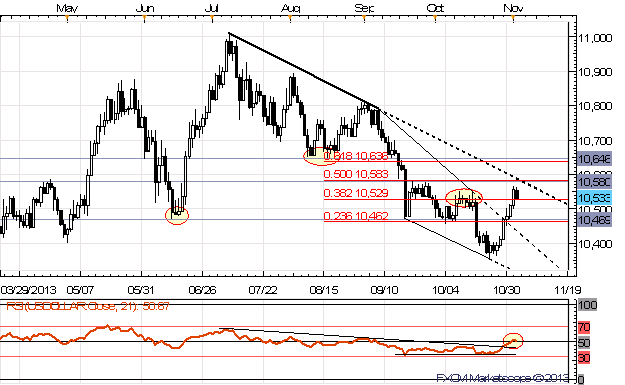 - The USDOLLAR has breached its daily RSI (21) downtrend dating back to July, signaling a potential turnaround in momentum.

- The pullback today has seen price consolidate in territory held in mid-October near 10540, while holding above 10529 (38.2% retracement of September/October high/low).

- Accordingly, we’re looking for the index to hold above 10529 through the North American session in order to look for longs in the US Dollar to be reestablished.