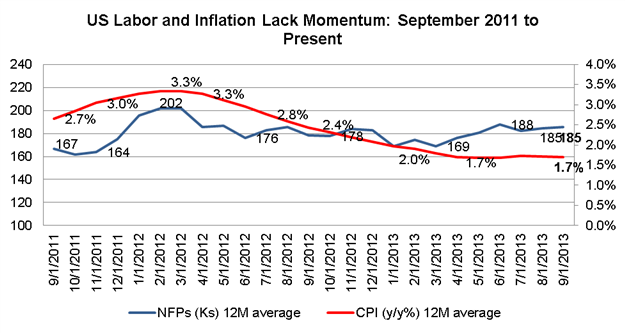 - Commodity currencies – which benefited most after September FOMC – lead.

- Data trends unchanged since September, but US government shutdown reason enough for no taper.

The US Dollar remains near multi-month lows despite the rebound the past few days ahead of today's Federal Reserve policy meeting. Investors have almost fully shifted expectations to the Federal Reserve keeping QE3 on hold, as incoming US economic data has been disappointing the past several weeks

Specifically, there are additional signs that the labor market is stumbling, while recent spending consumption data – both September Durable Goods and Advance Retail Sales – has suggested the US economy might be slowing. Furthermore, as a result of the US government shutdown, US Consumer Confidence plunged by the most in over two-years in October. Needless to say, the 4Q’13 outlook doesn’t look well.

At its September press conference, the Fed via Chairman Ben Bernanke outlined its concern that the US fiscal gridlock would result in a GDP-negative government shutdown; and the realization of this fear adds on to the pile of evidence that suggests the Fed will keep QE3 on hold at $85B/month.

The Fed should stick to the script that its basing decisions on incoming data, not some preset timeline to wind down stimulus as markets had expected. Some points made last month on the data the Fed used to not taper QE3:

- Consumer Price Index 12-month average, May versus August (the most readily available data at the June and October meetings, respectively): +1.7% versus +1.7%.

- Conclusion: CPI remains below the Fed’s +2% yearly target, and it lacks upside momentum.

- Conclusion: the labor market is steady, but not strong.

Accordingly, bond and FX markets are starting to align for another non-taper, with the US Dollar falling against all but one of its counterparts today, and higher yielding currencies (AUD, NZD) outpacing lower yielding ones (CHF, JPY). This morning I outlined the conditions of several European currencies setups going into the FOMC meeting.

Considering that markets appear to have priced in a non-taper, the impetus falls on the policy statement’s tone to determine the magnitude of price action in the wake of 14:00 EDT/18:00 GMT today. It is worth noting that there won’t be either a press conference or an update to the central bank’s economic forecasts, meaning that the policy statement should carry extra weight.

Today’s Fed meeting will shift the tectonic plates of financial markets, no doubt. Chief Currency Strategist John Kicklighter will be expanding on this analysis and reviewing the possible outcomes in a special webinar for the Fed rate decision in DailyFX Plus, starting at 13:45 EDT/17:45 GMT. 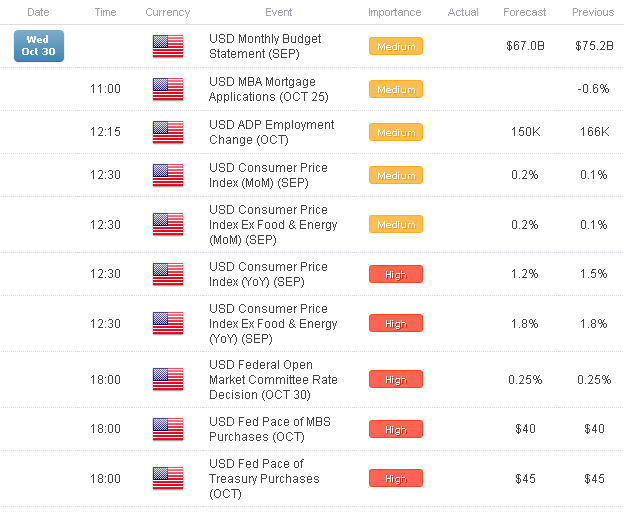