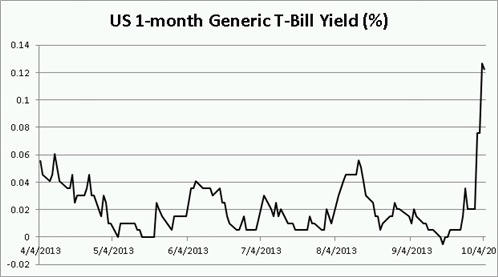 - High yield FX and US stocks remains elevated despite US fiscal issues.

- US Treasuries may be signaling that debt ceiling worries will come to light next week.

Higher yielding currencies and risk-correlated markets stabilized yesterday morning after US Speaker of the House John Boehner (R-OH) promised not to let the US default on its debt, essentially ensuring that the debt limit would be raised by October 17. The mere rhetoric of seeking compromise dismantled a ticking time bomb of growing negativity that had griped global markets in Asia and Europe on Thursday.

While FX and stocks may have bought the positivity – most notably the Australian and New Zealand Dollars recovering modestly against the safe haven complex – US debt markets have not. As noted earlier this week, the CDS curve for US government debt has inverted (1Y CDS > 5Y CDS) for the first time since July 2011 – a sign that this round of negotiations is more fierce than the fiscal cliff in December 2012.

With CDS spreads widening out suggesting greater fear, US Treasuries have also been signaling distress. The 1-month US T-Bill yield has spiked the past several days, from 0.0203% last Friday to as high as 0.1267% yesterday (at the time of writing, the yield was 0.1217%). This inversion of the yield curve on the short-end suggests funding stresses are rising as October 17 approaches, with thus far little evidence that markets are buying that a solution is around the corner.

If short-term US yields continue to push higher as they have over the past week, otherwise complacent markets – commodities, equities, and FX – will be forced to take notice and there could me a not-so-minor correction as reality sets in. With both Democrats and Republicans remaining very-much entrenched in their ideologies, financial markets have an eerie similarity to late-July 2011. Read Senior Currency Strategist Jamie Saettele’s notes on “panic trading” in the USDJPY here.