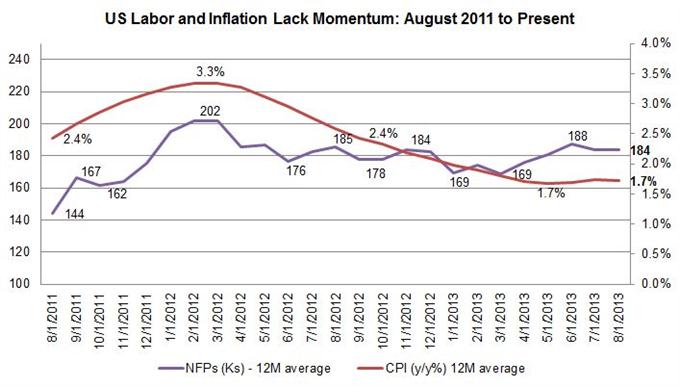 - The US Dollar’s rise is inevitable – so long as the economics warrant recently higher yields.

The Dow Jones FXCM Dollar Index has hit fresh 3Q’13 lows and is now at its lowest levels since mid-June – support ahead of the June 19 FOMC meeting. That was the meeting that sparked summer speculation that the Fed would reduce its QE3 program “later in the year,” which more or less translated into September.

But that was then and this is now, and the Fed surprised market participants across the globe by choosing to maintain QE3 at $85B/month. (Global markets are loving the news: the Indonesian stock market rallied as far as +7.36% overnight before settling for a more modest +4.65%, if to highly the exuberance displayed.) Investors seem to be caught in a state of confusion over the Fed’s decision to maintain its current policy path. I find said logic to be flawed.

In recent months, there were clear signs that the labor market was stumbling, and recent softer inflation data had stoked concerns about broader economic weakness. In June, the Fed said it would be open to tapering QE3 dependent on incoming data. Incoming data – specifically for labor and inflation – hasn’t been screaming “taper QE3.”

In fact, the Fed did exactly what it said it would do – base decisions on incoming data, not some preset timeline to wind down stimulus as markets had expected. Some points to make on the data the Fed used to not taper QE3:

- Consumer Price Index 12-month average, May versus August (the most readily available data at the June and September meetings, respectively): +1.7% versus +1.7%.

- Conclusion: CPI remains below the Fed’s +2% yearly target, and it lacks upside momentum.

- Conclusion: the labor market is steady, but not strong.

The data the Fed has been watching - especially since June - has not shown signs of improvement. Incoming data didn't develop appropriately. Bond markets, then, have deceived investors the past few months, not the Fed. So when will the taper begin?

There is talk about tapering in October, but that makes little sense given that one of Chairman Bernanke’s main concerns – an intransigent Congress that has become a veritable drag on the economy – will come to flourish as Democrats and Republicans square off over the next debt limit debate.

A December taper seems more likely – but that of course will be contingent on inflation moving higher and jobs growth accelerating. Above all, that the key takeaway is that it will only take one or two strong, important data (Advance Retail Sales, NFPs) to revive taper speculation; and then the US Dollar can recover more broadly.

Taking a look at European credit, the Euro has been boosted versus the US Dollar despite a drop in yields across the continent; US yields have dropped more over the past 24-hours, and widening yield differentials have proven to be EURUSD positive on Thursday.