British Pound, Japanese Yen Rally Before FOMC - What to Watch For Today

- US Dollar most unchanged but losing ground ahead of FOMC.

The Dow Jones FXCM Dollar Index remains near its monthly lows as investors have scaled back expectations of a full-fledged QE3 taper by the Federal Reserve at its policy meeting today, as incoming US economic data has been disappointing the past several weeks.

Specifically, there are signs that the labor market is stumbling, while recent softer inflation data has stoked concerns about broader economic weakness. Accordingly, the most recent forecasts from Bloomberg News suggest that only a mere $5B will be tapered today, with MBS purchases on hold at $40B/month and US Treasuries purchases scaled down to $40B/month (from $45B/month).

While this forecast is influenced by the distribution of economists’ estimates – most see no change in QE3 or a $10B cut in US Treasuries purchases – it’s evident that market participants see only a small taper happening; “taper-lite” as it’s been dubbed.

Considering that US yields continue to hover near their highest levels in two years (pre-US ‘AAA’ downgrade), a significant pullback in yields amid a “taper-lite” scenario exposes the US Dollar to further weakness, particularly against the day’s top performers, the British Pound and the Japanese Yen.

A dovish Fed/most negative US Dollar outcome would have the following characteristics:

- a small reduction of QE3, no more than $15B, all from US Treasuries, leaving MBS purchases unchanged;

- a promise not to begin a linear, successive pace of tapering – ‘dependent on incoming data’ – to avoid 1994-esque bond market sentiment from setting in;

- a downgrade of the Fed’s 2013 and 2014 growth, inflation, and labor forecasts in light of recent data;

- and a shift in the Fed’s forward guidance thresholds (previously set as: greater than +2.5% yearly inflation; or Unemployment Rate sub-6.5%).

Today’s Fed meeting will shift the tectonic plates of financial markets, no doubt. Chief Currency Strategist John Kicklighter will be expanding on this analysis and reviewing the possible outcomes in a special webinar for the Fed rate decision in DailyFX Plus, starting at 13:45 EDT/17:45 GMT.

Taking a look at European credit, “risk on” conditions reminiscent of the peak of the Euro-Zone crisis in 2011 have emerged. At that time, the Euro strengthened when peripheral yields fell (Italy, Spain) and core yields rallied (Germany, Holland). Such is the case today; although with the FOMC rate decision later today, price action has been understandably subdued. Accordingly, should a dovish FOMC emerge, intraday European credit suggests that the Euro is positioned to rally against the US Dollar. 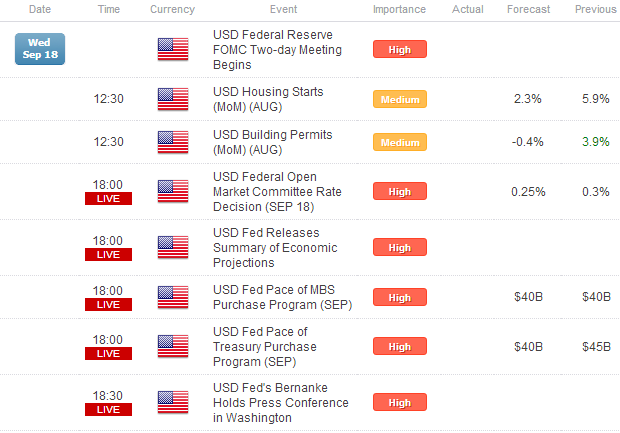