- Traders most bullish on New Zealand Dollar since August 2011.

- US Dollar looks to rebound with Advance Retail Sales (AUG) due before stocks open.

The New Zealand Dollar has been a leader in the recent swing higher in risk sentiment, and with traders becoming more bullish amid a shift in central bank policy, the carry currency looks poised to outperform going forward.

On Wednesday, the Reserve Bank of New Zealand suggested that it would hike its main interest rate in 2014, a clear sign that economic growth has simply become too fast-paced and the benefits of looser monetary policy – a weaker currency that would help exporters’ sell their goods to foreign consumers – no longer keeping rates at their post-2008 lows.

In fact, a look at the Credit Suisse Overnight Index Swaps shows that traders are now pricing in +97.0-bps into the New Zealand Dollar over the next 12-months. This is the most bullish bet since the first week of August 2011, before the US lost its ‘AAA’ rating with Standard & Poor’s, and before the NZDUSD plummeted from an all-time of $0.8843 on August 1 to as low as 0.7966 on August 9 (-9.92% in seven trading days).

At this point in time, near-term weakness seen in the New Zealand Dollar is likely to have two causes: exogenous anxiety due to emerging market growth concerns; and technical selling as profit is taken amid overbought conditions. Today, amid key US economic data – the August Advance Retail Sales report - there is a chance for a strong reaction at a critical juncture for the NZDUSD (see the chart below). 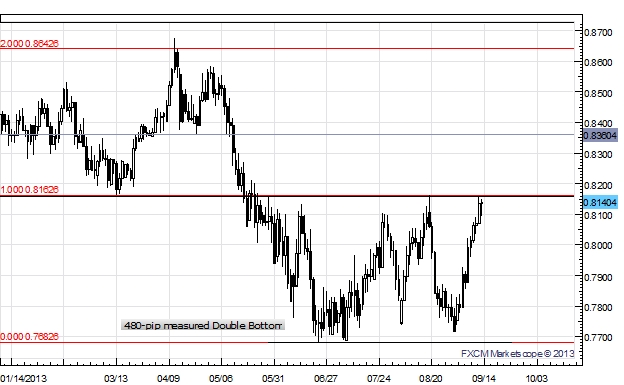 - The NZDUSD is on the verge of initiating a Bullish Double Bottom pattern on a weekly close above $0.8160/65.

- The measured move calls for a rally into 0.8640/45, just short of the April swing high 0.8677; it would be logical to take profit near such a significant level of resistance (yearly high).

- Fundamentally, the US Advance Retail Sales (AUG) report poses a threat; a beat of the +0.4% m/m print could provoke a near-term setback in price; the pair is overbought on the H1 and H4 timeframes per RSI (21) and Slow Stochastics (5,3,3).

- A weak US sales report could provoke a break higher; confirmed above 0.8200.