- US Dollar eases ahead of August NFPs – only a short-term dip?

Demand for higher yielding and riskier currencies has picked up overnight with the commodity FX bloc leading midway through the European trading session on Friday. The rebound in sentiment, in part, is due to continued gridlock among the G-20 leadership regarding Syria; and the less likely international conflict, the more secure investors are.

Elsewhere, in somewhat of a shift in recent trends, the British Pound is trailing as the European currencies on the whole experienced a bit of lighter data this morning. Of note, a dip in UK exports to countries outside the European Union suggests that the emerging market slowdown, including the BRICS, is starting to have a real negative impact on global growth. Data like this will be important to watch over the coming weeks.

Ultimately, today is all about the August US labor market report, and the US Dollar finds itself marginally lower on the day amid some profit taking. The Dow Jones FXCM Dollar Index hasn’t done much the past week, down only -0.20% over the past five-days. That should all change in a few hours.

A surprise to the upside is looking likely in the wake of incoming data. The ISM Services report surged to its highest level since December 2005, and the Employment subindex rose to 57.0 from 53.2, a sharp increase signaling accelerating labor growth. Such a figure is important considering that service jobs comprise approximately 80% of those in America.

Additionally, the recent Consumer Confidence report showed labor sentiment improved to a near five-year high, mirroring the improvement in Initial Jobless Claims, which are at a post-2008 crisis low. A drop in the Unemployment Rate to 7.3% (from 7.4% on the back of NFPs at +190K or higher (with estimates ranging as high as +240K) will bolster the September taper case and lift the US Dollar into the week’s end. 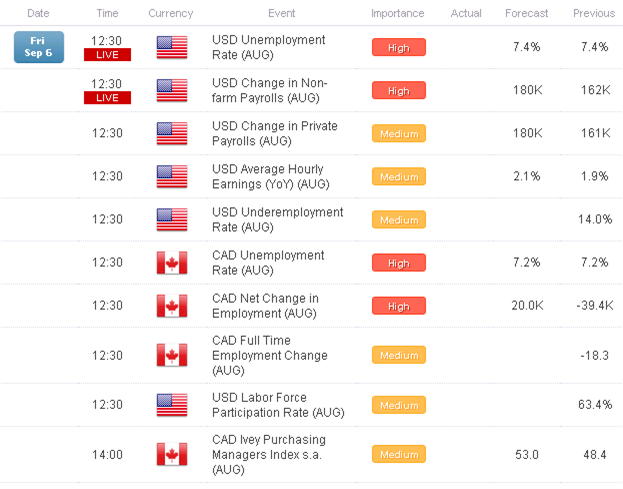